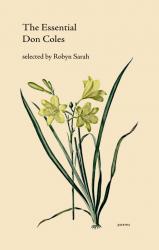 Praise for The Essential Don Coles

‘Poetic pragmatism is a strong element of Don Coles’ poetry. Coles’ voice, according to critic Robyn Sarah, is ‘‘civilized yet informal,’’ for Coles neglects any attempt to ‘‘primp’’ and aestheticize his language.’

‘The Essential Don Coles, with a perceptive foreword by Robyn Sarah, is an important book, in spite of its smallness.... I can not think of a better introduction to a poet who will be increasingly recognized as one of the best of our era. The exactness, the ‘odd’ nobility, the depth of understanding, the quitness, the tenderness, the plain but carefully nuanced style, and, above all, the beauty of Coles’s work, places him, to my mind, in the company of Matthew Arnold and WIlliam Stafford.’

‘If the Essential Don Coles is an incomplete document, it is nonetheless a useful document (and beautiful, too). It consolidates Coles’ achievement to date in a way that will help readers to consider his new work in the context of what has come before. And it presents a fairly complete picture of Coles’ achievement in the shorter-lyric mode -- though I’ll make the case that Coles’ longer lyrics (and there are many such in Where We Might Have Been) form a no less essential part of his oeuvre.

This is the second of three ‘‘essentials’’ that Robyn Sarah has edited for the Quill. (The others are The Essential George Johnston and The Essential Margaret Avison.) She does a good job of it. Her foreword is admirably brief, and mostly practical: she gives us a sense of how she made her choices; she points to the notable omissions; she tells us how she has handled variant texts. She’s not afraid to adopt a critical voice, as well. Writing out of a long and intimate acquaintance with Coles’ work, she gives us a sense of his great themes (theme, really: time’s passage) and his stylistic predilections. Then she gets out of the way, so that the poems can speak for themselves.’

‘Coles is fun to imitate, but no one does Coles like Coles. In both style and substance, he’s at once instantly recognizable and always surprising.’

Forests of the Medieval World

Forests of the medieval world, that’s
where her mind will wander
the three dissertation years, lucky girl --
Forest of Bleu, which crowded around
the walls of Paris and stretched 10,000 leagues
in every direction; the great Hercynian forests
of East Prussia, from which each year
334 drovers bore the logs for the fires
in the Grand Duke’s castles of Rostock,
of Danzig and, furthest east of all, guarding
the borders towards the Polish marshes,
Greifswald and Wolgast. I’m so sad
I could die, you said as you left, but
my children, how could I bear it --
and I know, I know there are ways
of losing children, of seeing them stray off
among the trees even now, especially now!
Every fleet needed for its construction
the razing of an entire forest --
lost forests meeting on the tilting hills
of the Caspian, the Baltic, the Black Sea,
over the mountains of water the file of forests
comes. Your face is a mobile mischief,
do you know? Your eyes mocked before
they entreated, your lips rendered
both comedy and its dark twin
in microseconds, and your tongue
harried my mouth’s bays and inlets.
The Oberforstmeister of Kurland promised
the King ‘at least half-fabulous’ beasts
for the hunt, his forest measured
140,000 arpents and even on the swiftest mounts
horsemen could not traverse it
in a month. My mind runs fast
down its arpents and leafy corridors,
seeing no one, I should slash
tree-trunks to procure my safe return
but I can’t stop. My mind is running
on pure grief and pure love, I want you
to know this. The Forest of Othe
was so still you could hear a shadow
cross a face at 60 leagues distance --
it had linked the Lyons Massif with
the Woods of Gisors but after a hurricane
levelled a million trees in 1519 the diligent
peasants moved in with plows and those forests
were never reunited. And
the forests of Finland, have you thought of those?
All the way to Archangel and the White Sea?
They can show you how you were
before these excuses. What can you do
about this, your exigent look said
in the doorway, I am going do you realize
I am going? And that both of us will survive this?
When the Swedes needed cash they cut down
the forests of Pomerania, the result in
many cases is sand-dunes. This for day-trippers
is nice, in your rented Strandkorb there is room
for everybody, also for dressing and undressing
when the beach is crowded. In the forest of Morois
Tristan lies with Iseult, they are waiting
for the King her husband who will tell history
they were only sleeping. In
the Black Forest dwarf trees and greenheart
still flourish -- as for the Rominter Heide
it was so huge that most of its lakes
and forests were ‘held in reserve’,
not listed or even mentioned, so for generations
all that those lakes and forests could do was
grow uncontrollably in the imagination. I
would take you with me into the Rominter Heide
if you would come: there
each child we must not hurt will
wear a rose in sign of her ardent, forbearing
heart, in sign of his calm-eyed ascent through
our extreme, necessary years. Coles entered Victoria College at the University of Toronto in 1945. He did a four-year history degree, then a two-year M.A. in English, spending two undergraduate summers in Trois-Pistoles, Quebec, learning French, and one summer travelling in Europe. He had several courses with Northrop Frye and Marshall McLuhan, whom he recalls as the best teachers of his life. In between the two M.A. years, he spent a year in London working in a bookstore, then enrolled at Cambridge from 1952 to 1954, and upon graduating was awarded a British Council grant to live in Florence for a year. It was in Stockholm that he met Heidi Golnitz of Lubeck, Germany, whom he eventually married; they lived in Copenhagen and Switzerland before coming to Canada with their daughter in 1965 -- supposedly for a visit, but they stayed.

It was only around 1967, in tandem with teaching, that Coles began writing poems. His first collection appeared in 1975 when he was forty-seven. It was followed quietly by several others, but he resisted becoming any kind of public poet-persona. He was sixty-five when Forests of the Medieval World won Canada’s premier literary award. As a poet, Coles has always marched to his own drummer. He was never enamoured of the modernist poets, looking instead to what he has termed the ‘Hardy-Larkin line’, those who were able to move their art back towards accessibility and the general reader. Besides his ten poetry collections, Coles has, since retirement, published a novel and a collection of essays and reviews, and translated a late collection by the Swedish poet Tomas Transtromer. Robyn Sarah was born in New York City to Canadian parents, and has lived for most of her life in Montréal. A graduate of McGill University (where she majored in philosophy and English) and of Québec’s Conservatoire de Musique et d’Art Dramatique, she is the author of seven poetry collections and one previous collection of short stories, A Nice Gazebo, published by Véhicule in 1992. The same year, Anansi published The Touchstone: Poems New and Selected, a collection of her poetry spanning twenty years. Robyn Sarah has also recently published a collection of her essays on poetry, entitled Little Eurekas.