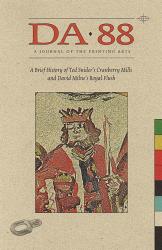 Gordon Sisler reconstructs a history of Ted Snider's Cranberry Mills with a focus on the early influence of David Carruthers at Papeterie Saint-Armand in Montreal and then, later, the sale of Cranberry Mills and its re-emergence as Crown Mills in St. Catharines. Kevin Heslop interviews Karen Schindler of Baseline Press (London, ON) who shares her thoughts on publishing, poetry and the economics of reciprocity. Bibliophile Chester Gryski presents a history of John Robert Colombo's Hawkshead Press. Stan Bevington revisits the arcane technology behind the David Milne Playing Cart Project that was based on watercolours inspired by a book on playing cards that Milne had found in a Toronto library in 1941 and that was published in a limited edition of 100 copies by Coach House Press in 1973. Typographer Richard Kegler presents Bixler Roman, a book face based on the roman letterforms developed by Venetian printers of the fifteenth century which are often characterized by a subtle variance from the strictures of geometry. And, finally, Don McLeod introduces wood engraver Alan Stein of Parry Sound.

The front cover is based on cards from a deck created from two watercolours by David B. Milne which were, in turn, inspired by a book on playing cards that Milne had found in a Toronto library in 1941. The deck was published in a limited, boxed edition of 100 copies by Coach House Press in 1973. The keepsake is a sample of one of the cards. 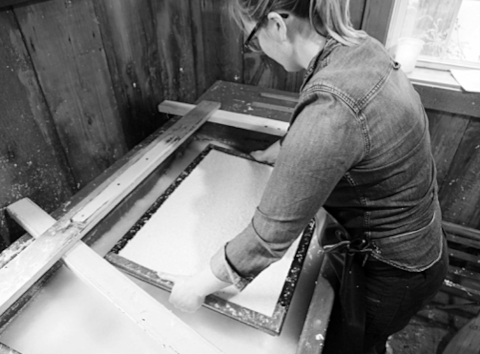 Vatwoman Brynn Dooley at Crown Mills removes the mould and deckle from the vat and provides the requisite shake to 'set' the fibres. Credit: Gordon Sisler.