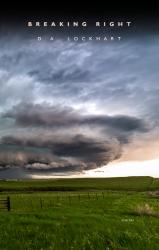 In D.A. Lockhart’s Breaking Right ordinary Hoosiers experience extraordinary moments that reveal the complicated correlations between their beliefs, their relationships and the land beneath their feet.

A junkyard worker seeks fame, fortune and a feeling of belonging behind the wheel of a hot-rod emblazoned with a fire-breathing corgi. A hard-luck basketball scout, whose day-to-day existence abides within the quietude between calamities, expects the worst when a foreboding creature known as the Mothman is spotted in Muncie. A pharmaceutical researcher is drawn into the orbit of an eccentric artist whose dramatic plan to ‘heal’ the city of Indianapolis requires a car painted to resemble a possum and a shamanistic Etch-a-Sketch.

In these stories rooted in the everyday, fate, acts of God and good old-fashioned luck beget exceptional circumstances and once-in-a-lifetime occurrences in which shared mythologies have the power to bring people together—or tear them apart.

From ‘The Etch A Sketch Shaman’

‘This guy,’ asked Jessamyn as she hovered an outstretched index finger a few inches from the picture hanging before her, ‘does all this with old cassette tapes?’ She was pointing at an all-too familiar pose of Tom Waits on a crème-coloured canvas. His outline was dark and shiny, like the straight-edged of an oil spill.

‘He does,’ replied Trevor. He stood directly beside Jessamyn, closely examining the next canvas in line; a reproduction of Frank Zappa from his younger years, backlit by its mint green canvas. Zappa was majestic in stature. Trevor, in his late twenties with a mop of thick shaggy hair and mustache, attempted to match the posture before slumping back down into his comfortable farm boy slouch. Jessamyn would say Trevor was more modeled after Vonnegut in stance and form, a hint that pushed both at humility and quiet self-confidence. ‘He was working on a couple when I was over at his place a few weeks back. He was using old cassettes someone had traded him for a couple of old car speakers at the booth he runs at the Flea Market over Irvington way.’ Trevor had described initially Edgar Moore as that one great hustler artist that every Midwestern city should and generally manages to develop. Trevor had known him in the way that small town friends often had, in a sort of life-out-time fashion that knew no beginning and no end.

Jessamyn wiggled her finger, posited a lighter look at the picture, then dropped a step back to take in the rest of the canvases that hung on the single wall of the makeshift gallery. There were about a good ten or eleven of all the same size. The art was fairly mundane in folk art nature, but there was something near magical in the way it struck her. Jessamyn was little taller than Trevor, a year younger, and carried the dark hair and tanned complexion of her Persian father. She had the fine angular features of her mother. ‘He sounds like a flea market professional,’ she opined, realized that she sounded like a judgy out-of-towner and quickly added in sympathy. ‘The things we go to get by.’

‘He is known to work in the flea market,’ offered Trevor. ‘But a little better known as artist. A shamanic artist, a real healer of sorts.’

Jessamyn paused to consider. ‘Shamanic?’ she repeated. She was a newcomer to Indianapolis. She had come to know Trevor in the last few months. She had got to talking to him at a Pacer’s game during an event held by the pharmaceutical company she works for. A mere few weeks into her new job in the research lab position and Trevor had become her one other single and ‘hip’ friend actually from the city. He was a bonafide Hoosier and good company in the way very few other men or women at work had managed to be. She might have called this particular night a date, seeing as it was only her and Trevor. It could have seemed that way quite easily, except that the two had managed to be both awkward together and quite comfortable at the same time. There was an emotional and physical line that neither one had been willing to cross.

‘Yeah,’ said Trevor, ‘like the Lenape kind we stole the state from. He used to be pretty famous about it.’

Jessamyn hummed a reply to this. This idea fascinated her. Back home, Indiana was often referred to as the backwoods kind of place down south full of farmers, conservatives, and religious zealots. Out of something that was undoubtedly not a coincidence, Toledo’s local bible thumping television station ads would be majority from Indiana PO boxes. There was something evangelical about the land she had come to inhabit. A lot of her neighbours had seemingly bought into it, for good or bad. And the daughter of Muslim auto workers with an undergraduate degree in microbiology was left more curious and wanting about spirituality in America. Edgar Moore the shamanic healer artist was about as interesting as it got for Jessamyn.

‘Harnessing all the superpowers of the short story in one slim volume, D.A. Lockhart writes about hot-rods, sports, love, disasters both natural and supernatural, and the legends and mythologies that shape the lives of a cast of unforgettable ordinary characters who are anything but ordinary.’

‘Whether beating Larry Bird’s entry in a local automobile race, or escaping the planet in an alien spacecraft, the stories in Breaking Right feature characters in search of their place in the world. The characters’ quirks drive their actions and interactions within the boundaries of Kentuckia and Indianapolis: take, for instance, the Etch-A-Sketch shaman, a conceptual artist whose masterwork includes a still-running classic AMC Pacer, and a backstory that breathes new magic into the sixty-year-old magic screen. These stories celebrate Indianapolis life from inside its quirky underbelly.’

‘Breaking Right settles into its landscape, telling stories about the everyday lives of Hoosiers, the parts that exist between the gas station and the dirt track, between fossil beds and the factory floor. Lockhart seeks out the mundane as well as the supernatural, never forgetting, underlying it all, "the inklings that there was something to be wary of."’ Daniel Lockhart is the author of several books of poetry, including Devil in the Woods (Brick Books, 2019) and Gravel Lot That Was Montana (Mansfield Press, 2018). He currently acts as publisher of Urban Farmhouse Press and poetry editor of The Windsor Review. He is a Turtle Clan member of the Moravian of the Thames First Nation and lives at Waawiiyaatanong, lands most often known as Windsor, Ontario, and Detroit, Michigan.