Thoughts on Driving to Venus 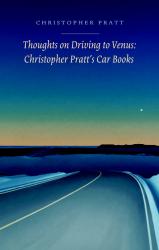 Thoughts on Driving to Venus documents the thoughts, memories and impressions of Canadian artist Christopher Pratt as he drives across Newfoundland in search of inspiration.

Painter and printmaker Christopher Pratt is known for luminous, meticulous images of Atlantic-coast settings. Strongly influenced by the culture and landscape of Newfoundland, Pratt’s still, crystal-clear images of archetypal island life convey more than landscape. They are richly imagined, almost hyperreal depictions of the land, imbued with memory and meaning.

Thoughts on Driving to Venus allows readers an unprecedented glimpse inside Pratt’s mind as he journeys through the Newfoundland countryside. Originally intended for sketches that would later assist in his painting and printmaking, Pratt’s aptly named "Car Books" document numerous road trips he and his wife, Jeanette, took from the late 1990s to the present. The diary-like entries provide an overview of the artist’s stream-of-consciousness impressions, journalistic accounts and personal reflections during these trips. Some passages record the effects of colour, light and shadow on a scene—what he refers to as "sketches"; some delve into personal recollections conjured by the landscapes seen through the windshield; others are reflections on his complex emotional ties to his homeland. The result is an intimate portrait of the creative process and realms of the imagination of one of Canada’s most important contemporary artists.

The Car Books were begun as Christopher and Jeanette drove along the Burgeo Road in 1999. [i] The Burgeo Road—Route 480 that runs one hundred and eighty-five kilometers southeast from Stephenville to the port of Burgeo and the nearby ‘Sandbanks’ on Newfoundland’s southern shore—crosses through a relatively isolated quadrant of the island. It traverses the forests and barrens of the rugged interior that includes the Annieopsquotch Mountains and Peter Strides Lake. Although begun on the Burgeo Road, Pratt took the notebooks with him on all his subsequent road trips across the province.

At first, Pratt intended that the Car Books would record just his impressions of the landscape and the associations they elicited in him. The writing was meant to be ‘stream of consciousness’ comprising ‘series of words and one-liners’ and largely responses to ‘things flashing by.’ [ii] But, even by his own admission, that form of writing, ‘didn’t last long.’ [iii] It was replaced by a number of different journaling forms, the most frequent being a running account, much like that used in recording information in a diary.

As such, his entries are descriptive of what he sees outside the windshields. On one level, they note basic details of temperature, road and weather conditions, forecasts, traffic patterns and the number of moose and caribou that he and Jeanette encounter on the trips. They also tell of destinations, accommodations, menus—all very literal facts that, on the whole, serve to orient himself and the reader to the ordinary aspects of a road trip journal: Where he and Jeanette are going and what they are seeing and experiencing along the way.

Much more than an interval between leaving home and getting to a destination, the road trip for Pratt, particularly to Newfoundland’s west coast, was a creative odyssey in search of subjects to interpret as paintings and prints. Although an important part of his trips was the journey itself—moving—the drives were punctuated by his getting out of the car and hiking along pathways, beaches (‘strands’), or along rugged trails in and around the hills, river valleys and salmon waterways. And during these ‘ambles’ with Jeanette, he would photograph places and scenes of interest. These included abandoned buildings, lobster and fishery staging factories, the picturesque hills and valleys, the sea, and the phenomena of the light effects, the weather and environments that defined these places as much as the rock and water. These were his muses as much as was the journey.

Factual, descriptive, imagistic, journalistic, the diaries also became personal reservoirs of their author’s feelings. In them, observations are combined with associations. The landscape conjures up memories, stimulates recollections, and in some instances, haunts Pratt as he sits in the passenger seat, looking impassively out the window and meditating on what passed before his eyes. The land itself prompted memories to come to the front of his mind, and as the act of journaling transformed over the years, these memories found their way into the writing. They may comprise something remembered from his own childhood, of fishing expeditions with his father and friends, of enigmatic trips to places with his mother. Others tell of expeditions with his first wife, Mary, and their children.

These entries also illuminate many of Pratt’s opinions about his complex relationship to his homeland before and after it became a province of Canada in 1949. In particular, Pratt is not averse to commenting on the economic transformations he sees traced in the buildings and people he witnesses on his travels. His words chart the decline from self-sufficient communities to their abandonment after the fishery collapsed in the 1990s, from the times when there were several American military bases on Newfoundland’s east and west coasts during the Cold War to the present day when these bases and housing precincts have morphed into emblems of lost prosperity and dispiriting cultural imperialism.

Above all, these entries track a man’s thoughts, often expressed in poetic terms, as he scans the wide expanses of the place—Newfoundland—he calls home. Over the course of the more than a decade that these entries span, Christopher and Jeanette traveled to virtually every corner of the island. If there is long cadence to the books’ episodic narratives it is the story of discovering identity as a consequence of exploring the land one stands on. For Pratt, this means not just describing the landscape in words, it also involves interpreting it as art. There was also the requirement to return to specific locales in order to calibrate different and fluid changes from one trip to the next, even of the changing patterns of constellations and planets that gleam in the twilit sky. The idea of eternal return gives these books a magical, incantatory quality. There is a seeming lyrical allure to the west coast, to the Great Northern Peninsula and its Tablelands or the St. John Highlands, and to the Burgeo Road that takes him through the Blue Hills of Couteau. By revisiting these places and telling the stories in words on a page, and perhaps later in the visual poetry of a painted image, Pratt seeks to make the place part of his own identity.

These Car Books provide valuable insight into the mind, imagination and creative process of one of Canada’s most important contemporary artists who, over more than six decades, has interpreted an element of our national identity as landscape-based visual metaphors. These words, set alongside his paintings and prints, provide a richly textured gloss that conveys complex meaning onto the pictures. The picturesque becomes laden with overtones of personal and shared histories, of associations and neuroses, of loss and longing, and of the passage of time etched on the skeletons of built structures. Beyond conceits of decline, the combination of text and image also transforms the seemingly coldly descriptive landscape images into emblems of radiance and joy that bear witness to a soul connecting deeply with a place, and being comfortable with his life and with the woman and fellow traveller he loves.

i. On Saturday April 11th (2009), Pratt wrote, ‘Burgeo Road, 10:30 am. 3°C, breezy, mixture of sun and cloud. Enroute Sandbanks on a chilly but very inviting day. I always remember these "Car Books" began on this road—intended to be a short-hand, stream of consciousness, trigger-happy sort of thing, a sequence of responses, not considered efforts at insights or forced philosophies.’ Christopher Pratt is a prominent Canadian painter and printmaker known for creating meticulously precise images of Atlantic Canadian settings. Born in St. John’s Newfoundland in 1935, he studied art at the Glasgow School of Art and Mount Allison University in Sackville, New Brunswick, before deciding in 1963 to dedicate himself to his art full time in his home province of Newfoundland. His works have been exhibited nationally and internationally, and have received many prestigious awards and honours. In 1980, he designed Newfoundland and Labrador’s provincial flag. He was named a Companion of the Order of Canada in 1983. Pratt lives and works in St. Mary’s Bay in Newfoundland.