Palookaville: Seth and the Art of Graphic Autobiography 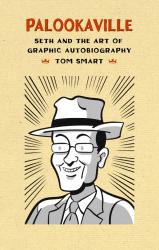 Tom Smart’s Palookaville: Seth and the Art of Graphic Autobiography examines the construction self-identity and the wafer-thin distinction between fiction and autobiography in Canadian cartoonist Seth’s Palookaville series of graphic novels.

Palookaville, the graphic novel by Canadian cartoonist Seth (Gregory Gallant), creates a dystopian reality that struggles with existential questions about the time, fate and identity. His bold, confident draughtsmanship depicts life in a bygone era and illustrates complex tales of the tragic consequences of living a static, inauthentic life.

In Palookaville: Seth and the Art of Graphic Autobiography, curator, critic and author Tom Smart examines the microscopic separation between Seth’s art and life, between his graphic fiction and the autobiographical elements that it contains. Smart’s analysis of the Palookaville story unfolds tantalizing clues into the artist’s construction of identity, but more, it reveals art’s ability to make sense of life, the passage of time, and perhaps even our own humanity.

Seth, who lives in Guelph, Ontario, is an artist, author and cultural commentator, and one of the foremost graphic novelists working today. His unparalleled technical skills as a draughtsman and his unique ability to evoke an entire imaginative world based on a mythical mid-twentieth-century small Ontario town rank him as a gifted storyteller and part of a distinguished line of Canadian graphic designers.

But Seth can also be described as a sophisticated performance artist who cloaks his artistic practice in the garment of a cartoonist and illustrator. He is intent on examining the malleability of the comic book format to probe the nature and shape of time, and the many different ways that loss and longing can cloud one’s memories of the past. His is an artistic practice that is entirely holistic. In his life he has immersed himself in the fashions, trappings, design motifs and manners of a mid-twentieth-century man. Just as the world he lives in echoes the past, so the world he describes in his art resonates with the same voice; this world has a fundamental integrity. Every detail is set down deliberately and with the intention of crafting an artistic reality that is true to what he sees as a period in Canada that existed perhaps a generation before he was born. His parents’ time holds an uncanny allure for him, and he takes great pains to evoke it in the panels of his comic books, on the surfaces of his illustration boards and in the miniature buildings and streets that comprise his fictional southwestern Ontario town called Dominion.

(... Continued in Palookaville: Seth and the Art of Graphic Autobiography) Author, art gallery director, curator, columnist and special advisor to art galleries and museums, Tom Smart is especially noted for his award-winning critical biographies, catalogues and monographs on Canadian artists, including Foreword IndieFab Silver winner Jack Chambers’ Red and Green. To date, Smart has written about painters Alex Colville, Christopher Pratt, Mary Pratt, Tom Forrestall, Miller Brittain and Fred Ross; graphic novelist George A. Walker; and sculptor John Hooper. Smart has worked in art galleries and museums across Canada and the United States, among them the Beaverbrook Art Gallery, the Winnipeg Art Gallery, the Frick in Pittsburgh, and the McMichael Canadian Art Collection where he was Executive Director from 2006–2010. Smart’s essay ‘The Wood Engravings of Rosemary Kilbourn’ was recently published in the Devil’s Artisan. His bi-weekly column ‘The Curator’ appears in the Saint John Telegraph-Journal.