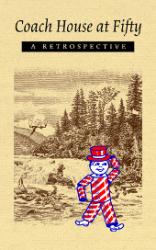 Coach House at Fifty looks back at an underreported slice of the complex history of one of Canada’s most celebrated small, literary publishers, and particularly the impact of changing technologies on book design and production at the shop on bpNichol Lane in the shadow of Rochdale College in Toronto. The Gordon platen press and the Linotype Model 5.

Curator DENNIS REID reminisces about ‘The Old Coach House Days’ (1964–66) when the press released early poetry books by Wayne Clifford and Joe Rosenblatt. Michael Ondaatje was an unknown, and the production technology was primarily 19th-century letterpress augmented with silkscreen.

Simon Fraser professor JOHN MAXWELL picks up the narrative in ‘The Early Digital Period’, starting in 1974 when publisher Stan Bevington bought a Datapoint 2200 and a Mergenthaler V-I-P phototypesetter. Maxwell’s research and teaching focus on the impact of digital technologies on the cultural sector (and particularly books and magazines), the history of digital media and the emergence of digital genres and mythologies.

‘Twin Heidelbergs’ looks at the genesis of Coach House as a silkscreen shop and follows the effect of key purchases of capital equipment as Stan Bevington moved his company from silkscreen to letterpress to offset and thence to digital in the first twenty years. And then lost the publishing arm of the company to managers who thought they knew better, but didn’t. And then fought to get it back.

‘A Short Walk Around the Perimeter of a Heidelberg KORD’ is a photo essay bySANDRA TRAVERSY.

DAVID SLOCOMBE contributes ‘The Origins of SoftQuad’, a look at the spin-off company founded to improve automated typesetting at Coach House, but which spun rather too far off its axis after the early death of its president, Yuri Rubinski.

Coach House is in the public eye this year, as publisher Stan Bevington and his colleagues celebrate the golden anniversary of the press. Fifty years on, Coach House is still pushing the edge of Canadian literature. This fall they have a Giller winner in André Alexis’s Fifteen Dogs; they will publish superstar poet Christian Bök’s The Xenotext, spun out of a poem encoded into bacterial DNA; and they are a key part of a major celebration of Canadian type designers Carl Dair and Rod McDonald. Coach House has for fifty years been known as a central crossroads of avant-garde literature and the printing arts.

Coach House is also known—by a much smaller number of people—as a crucible of digital technology innovation in publishing since the early 1970s. This story is a crucial part of Coach House’s history, but it is a story that largely lies outside the standard narratives of computerization—in industry or the arts. It is a story that, notably, does not begin with Steve Jobs, or any other Silicon Valley celebrity. Rather, it binds together threads in technology, art, literature, and a very particular cultural milieu in the Toronto of the day.

If you are using an Amazon Kindle, or a device that runs the Kindle App, you will need: sf1_kindle.mobi.

If you are using an Apple or Android device (tablet, smartphone) an e-reader (such as a Kobo or Sony Reader) or a personal computer, you will need: sf1_epub.epub.