My Life on Earth and Elsewhere 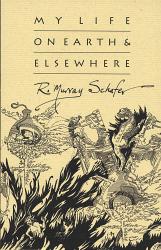 My Life on Earth and Elsewhere, a memoir by the internationally-acclaimed Canadian composer, music educator and writer R. Murray Schafer, traces the author’s life and growth as an artist from his earliest memories to the present. Scenes from his youth as an aspiring painter, a music student at the University of Toronto and a sailor on a Great Lakes freighter give way to memories of his several years of work and wandering in Europe, where he gained a deeper understanding of his vocation, and found, especially in Greece, the inspiration for much of the astonishing music he would create after his return to Canada.

Music is central to many of R. Murray Schafer’s memories. ‘One of the sounds that I’d almost forgotten until I began to write this chronicle was the tinkling of the piano keys when my mother used to wipe them with a wet cloth,’ he writes. ‘In the early years the high and low keys would be passed over quite quickly while the middle notes got the heavy scrubbing.’ The detail of this small, nearly-forgotten childhood memory is a poignant example of the way sounds can remain present in the imagination even when they are originated in the distant past.

Schafer recounts childhood summers spent in Manitoba lassoing gophers (and being paid two cents a head for them) and a music education marked by his cheerful but total resistance to the conventional instruction that was available. His youthful travels in Germany, France, Austria, Italy and Eastern Europe are recreated in a lively, impressionist style with plenty of comic and melancholy stories gleaned from his diaries of the time, including an account of a folk music convention in Communist Romania (which he attended with imaginative but shaky credentials identifying him as a representative of the CBC, The Globe and Mail, the University of Toronto Press and even the Kiwanis Club). The conference proving dull, Schafer eluded the government minders and took an unauthorized trip to see a girl he had met on the train, and despite knowing nothing of the language spent an idyllic few days with her at her parents’ remote village -- while the police questioned every young man with a beard in the area of Bucharest in a fruitless search for the suspected ‘spy.’

On his return to Canada, teaching assignments took him first to Newfoundland, then to Vancouver, where he created the World Soundscape Project. In 1975 Schafer resigned from university teaching and for many years has devoted himself full time to writing and composing.My Life on Earth and Elsewhere continues the story of his domestic and international musical adventures up to the present day.

Praise for My Life on Earth and Elsewhere

‘Like any good memoir, this is as much about the writer’s milieu as it is about the writer. Major figures crop up in Schafer’s tales: musicians such as Britten and Cage along with many others, including Marshall McLuhan, Ezra Pound, even Jim Henson. Forrest Gump-like stories fill the pages; Schafer has a knack for finding himself a player in big events. Unlike his thirty-plus other books, this is a personal memoir – but it is also a portrait of the history and public landscape of musical and intellectual life in the second half of the twentieth century.’

Despite the pleasure of working with Weinzweig and Guerrero, and meeting McLuhan, I was having difficulty in several other courses. Things were building to some kind of climax around Christmas time of my second year. In many ways, the university was a place that cared for authority rather than invention. For one thing, attendance was compulsory and a roll-call preceded every lecture. I hated these rules, which seemed the very antithesis of imaginative scholarship.

In those days the university choir was conducted by Dr. Richard Johnston, a tempestuous Texan whose face burned red during the temper tantrums that he seemed incapable of controlling. We used to call him ‘Furnace Face’. I resented having to sing in his choir since I had sung and was still singing more interesting music in the Grace Church Choir. The English choral tradition was still quite strong in Canada in those days, with a repertoire that extended back to Elizabethan times. When you’ve sung Thomas Tallis and William Byrd motets, or Handel’s Messiah with multiple choirs and orchestra, as we did each year in Massey Hall, the prospect of sappy pop songs is not at all inspiring. So I used to take large art-books with me to the rehearsals and calmly inspect them while the choir floundered through a repertoire of tasteless and toothless choral music.

‘Choir stand up!’ commanded Dr. Johnston from the top of the chair he always stood on. The choir stood up. ‘Choir sit down!’ came the abrupt contravening order. The choir sat down. ‘Choir and Mr. Schafer stand up!’ bellowed the commander. Schafer calmly turned the pages of his book on Rouault or Cezanne. ‘Schafer!’ screamed the doctor. ‘Stand up!’ Several girls began to swoon, recognizing the symptoms of the well-known tantrum that would sour the mood for the rest of the evening. ‘Come up here!’

Nonchalantly I wandered to the front carrying my precious book. ‘Sit there!’ ordered Il Duce, pointing to an empty chair directly in front of him. ‘Now, once again, CHOIR AND MR. SCHAFER, STAND UP!’ The choir stood up. Schafer opened his book and began to read. ‘SCHAFER!’ It was the loudest sound the school had ever heard. The dust rose from the windowsills and the lights flickered. Dr. Johnston leapt in the air, landing with such force that his feet went clear through the seat of his chair. I looked up to see him furiously waving his baton only a few feet in front of my nose. I did the only natural thing. I got up and ran away. He lunged after me but the legs of the chair trapped him and he came clattering to the ground. As I darted out the door, I saw girls hurrying to pick him up off the floor.

Now, before I go on, let me say that Richard Johnston and I grew to be friends in later years. We never spoke of that incident again. More important concerns united us. Chief among these was the fight to establish Canadian music as a subject fit to be taught and performed in Canadian schools and universities. The good doctor went on to establish an enviable collection of Canadian musical manuscripts and memorabilia at the University of Calgary and several of my manuscripts eventually found their way into this collection.

The other professor with whom I had a run-in at the U. of T. was Professor Rosy-Rear, also an American. Rosy-Rear was not his name but it is close enough. Of all the courses I had to take, his was the stupidest. Music education has never been distinguished by imagination but there are limits to how much stupidity a person can handle. It was during the Christmas exam that matters came to a head. I am not sure whether the questions on the exam were designed by a blockhead or for blockheads. I remember two of them. One was: ‘What would you use rice for in cleaning a violin?’ I have since asked many violinists this question without ever receiving a satisfactory answer. I even asked the famous violinist, Yehudi Menuhin, who didn’t know either. The other question was: ‘How would you teach a hare-lipped boy to play the clarinet?’ I answered this by saying I’d suggest another instrument. The rest of the questions were equally stupid and I rose to leave the examination hall after ten minutes; but the invigilator stopped me, by saying that I had to remain for a minimum of one hour. That was the rule. So I filled in the time by writing a little essay for Rosy-Rear on the subject of how music education might be more inspiringly taught. I didn’t expect this to strike home and, in any case, it was probably a silly essay since I hadn’t given the matter any advance thought. I recall that I concluded rather flippantly by telling him that it would please me greatly if he would give me zero on the exam because then, like Jean-Jacques Rousseau, whom I had been reading, I would have the distinction, if not of being better than my fellow man, at least of being different.

I expected to get zero on the exam but I suppose the essay was a little thick for the good professor with the result that he simply handed it over to the faculty director, Dr. Arnold Walter. Dr. Walter was a brooding Spenglerian sort of man who reserved his smiles for his dinner; at least, no one had ever seen him smile in the faculty corridors. He was, to be fair, an excellent lecturer, illustrating talks on Beethoven and Wagner with rhapsodic piano accompaniments. With him, after lectures, I would venture to talk about Martin Heidegger or Jean-Paul Sartre. I don’t know what he really knew about these people but, to the sophomoric mind, he seemed to know a great deal and I admired the latitude of his learning. He and McLuhan were the only two lecturers who really set me thinking in those days.

Anyway, I was summoned that day to Dr. Walter’s office. When I entered he was clenching his fists into little balls and squeezing himself. Suddenly he pounded the desk and roared: ‘I too haf read Jean-Jacques Rousseau!’ The violence of the assertion was startling. It seemed to preclude any rational discussion of Rousseau’s philosophy. I was told that I must apologize in writing to the two wounded professors or I would have to leave the school. A picture was painted of a young man forced forever to do menial work because he lacked a university education. A contrasting picture was sketched of an ambitious scholar going on to graduate school for which scholarships were tantalizingly touched on. Princeton University was mentioned. I was given twenty-four hours to think it over. Born in Sarnia in 1933, R. Murray Schafer is an internationally-acclaimed composer, environmentalist, educator, scholar, visual artist and writer. Despite only one formal diploma (the LRSM -- Licentiate of the Royal Schools of Music in London), Schafer has taught at Memorial and Simon Fraser universities, and received honorary degrees from Trent, Simon Fraser, Carleton, Toronto, and Concordia universities in Canada, and from Mendosa (Argentina) and Strassbourg (France). His music is widely praised and performed all over the world. His major achievement, the epic Patria cycle, is more often praised than produced, since it requires wilderness settings and performances that last all night -- or longer. Schafer lives in Indian River, just outside Peterborough, Ontario.