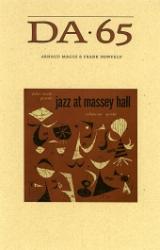 The issue includes A Conversation with Frank Newfeld, transcribed from a recording made in June, 2009. I, Illustrator is an essay by Frank Newfeld. Arnaud Maggs: Back to Ink by Robert Tombs. The Gauntlet Press's Original Emblem by Martin Howley. Chester Gryski reviews Wesley Bates' In Black & White: A Wood Engraver's Odyssey. Shane Neilson reviews The Surface of Meaning: Books and Book Design in Canada by Robert BRinghurst. Will Rueter reviews Pie Tree Press: Memories from the Composing Room Floor by Jim Rimmer.

Keepsake laid in is after a scraperboard by Frank Newfeld. Printed digital four-colour on an Indigo Press at Ampersand Printing (Guelph). The cover was printed offset by Tim Inkster at the Porcupine's Quill and features an album cover designed by Arnaud Maggs.

Ode to a Poem

In The Blue Moth of Morning, P C Vandall by turns acknowledges, embraces and subverts clichés of female relationships, emotions and bodies, exposing the inner...

‘George A Walker’s Xylographica’ is an essay by Tom Smart that appeared in the Devil’s Artisan #68 (...