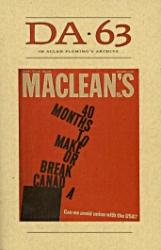 The second issue (of two) of the Devil's Artisan guest-edited by Martha Fleming on the subject of her father, Allan Fleming.

This is a companion volume to DA 62 (Spring/Summer 2008), which contained a chronology and images of Allan Fleming's life and work, autobiographical fragments and a survey of Fleming archival resources.

Keepsake laid in was designed by E A Hobart (Zab) and features a reproduction of a `Typograf' of the sort that Allan Fleming most certainly used at Cooper & Beatty. Printed offset in two spot colours by Tim Inkster on the Heidelberg KORD. The cover was also printed offset by Tim Inkster at the Porcupine's Quill and features a reproduction of a cover design Allan Fleming created for Maclean's.

Allan Fleming (l) and Lorraine Monk at the Carswell Company's printing devision in 1967, checking proofs for Canada, A Year of the Land.