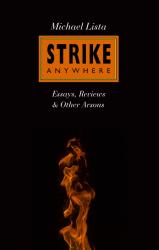 As Michael Lista is quick to point out, being a critic can be dangerous for your career. In his collection of essays, Strike Anywhere, he bravely takes on the inherently contradictory nature of artistic expression and tackles the moral and artistic implications of boob tube blockbusters, all while attempting to answer the age-old question: Why does poetry suck?

"I’d like to think that I’m polarizing the way a battery is," explains Michael Lista in his introduction to Strike Anywhere, "energizing the flashlight by which you read in the dark only because it has a negative and a positive side. Collected here, under one cover, are my cathodes and my anodes."

In his self-described ‘arsons’, Lista assesses with equal fire our literary darlings (Anne Carson, Don McKay), talented veterans (Steven Heighton, David McGimpsey) and promising newcomers (Stevie Howell, Aisha Sasha John) of the poetic genre. He depicts a literary institution pathologically averse to the sustenance of a traditional repertoire and addicted to the empty calories of poetic experiments. Television, too, falls prey to his jaundiced eye, from the militant sincerity of The Bachelorette to the receptacle of American anxieties that is The Walking Dead. But beyond passing judgment on the contemporary Literary Industrial Complex, Strike Anywhere acknowledges the inherent contradiction of poetic expression—that its power lies in its uselessness—and recognizes that poets are, nonetheless, the happy few, the unacknowledged legislators of the world.

With thoughtfulness, wit and considerable humor, Michael Lista offers a refreshingly candid take on the moral and aesthetic implications of storytelling in all its forms, from boob-tube blockbusters to the latest volume of verse.

From "The Imitation Game"

Sometime after Virgil aped Homer but before Kenneth Goldsmith nicked the New York Times, poets began robbing one another. It’s no surprise: both strands of the Western tradition’s double helix—the Hellenic and the Hebraic—begin with thefts, the Greeks absconding with Helen, and Eve filching the fruit. According to Harold Bloom, even Genesis isn’t sui-generis, having pilfered all its best bits from an earlier ur-text called The Book of J. As Beckett—or was it Andy Warhol—first said: "There’s nothing new under the sun."

When the second poet stole from the very first, he was a larcenist; when the third robbed the first two, he was a traditionalist. Ever since, the relationship between a poet and her predecessors has been described as influence—a fraught intellectual and stylistic exchange by which the old gives birth to the new. Influence’s most salient feature, as T.S. Eliot pointed out in "Tradition and the Individual Talent," is that it is anything but accidental. A literary inheritance may be many things, but it isn’t heritable. Safes don’t crack and divest themselves; it takes talent, discipline, and hard work to steal what someone else earned fair and square.

The critic who has written most obsessively about how and why poets influence one another is Harold Bloom. In The Anxiety of Influence, and its follow-up, A Map of Misreading, Bloom proposes a kind of Freudian theory of influence whereby poets enter into an agon, or struggle, with their forbearers. There comes a moment that he calls the "dialectic of influence," when the young poet realizes that poetry is both outside of her—in the library, in the canon—and nascent inside of her. If she’s a "strong poet," she’ll also realize that nearly all she wants to say has been said already, and well. But her ambition is what makes her strong, and so she will "misread" her most august predecessors, detecting an omission that only she is equipped to redress: herself.

In Bloom’s theory of influence, the young poet reads the greats with a simultaneous affinity and anxiety. The line that sings also stings, an agonizing reminder of the newcomer’s belatedness. Nevertheless, great poets breed great poets, and you can trace our English lineage like a line of bad blood. Milton comes from Virgil and Spenser, but especially Shakespeare; Keats from Shakespeare and Milton; Tennyson from Keats, etc. In A Map of Misreading Bloom charts the agon of inheritance as far as A.R. Ammons and John Ashbery, in whose prolix digressiveness Bloom detects an almost crippling belatedness commensurate with our own late hour. By focusing on major careers, he takes for granted that poetry’s trajectory is charted by great poets. But in the explosive proliferation of MFA programs since A Map of Misreading was published forty years ago, programs that graduate tens of thousands of writers every year, is that still how influence works? Who do poets want to write like today, and why? Michael Lista is an acclaimed poet, editor, critic, and non-fiction writer. He is the author of two collections of poetry: Bloom (House of Anansi, 2010) and The Scarborough (Signal Editions, 2014). He served as poetry editor of The Walrus and as poetry columnist for The National Post. His non-fiction appears in The Atlantic, Slate, The Walrus and Toronto Life. Lista is the co-founder of Partisan Magazine. He lives in Toronto.