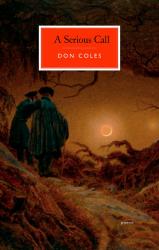 In his latest book of poetry, A Serious Call, Don Coles brings to life a series of everyday moments, objects, and relationships in a touching reflection on the passage of time and the power of memory

In A Serious Call, Governor General’s Award-winner Don Coles presents a collection of moments suspended in time: a line of poetry, forgotten for years and remembered as often; a photograph cut out of a 1942 newspaper that saves its subjects not from death but from oblivion; a fond memory of a bookshop in Southwark, where books feed a love of literature and a life-long friendship. In a deceptively plainspoken style enhanced by his signature precision, Coles’s contemplation of everyday moments and objects reveals not only the power of memory, but also the innermost fears and longings of the human spirit.

To my newborn grandson

There was usually a warning. "If you’re
So set on it", my Gramp would be told, "go ahead.
But keep in mind he’s just a little boy."
That was Gran. While she was talking
He’d be studying whatever piece of wall
He was nearest to, or adjusting his hat,
The straw one with the black band
Around the bottom of the crown. Then
Out the cottage’s back door we’d both go,
Him carrying the two-hander.

It was shaped like a harp. This is
Seventy years later, a long while for
A simile’s slow glow to be mounting
Towards a page’s, this one’s, surface, but
The saw’s shape never wavered.
It hung on pegs on the wall in
The entry-way, and only came down
Once or twice a summer.

The simile’s stronger for the wait.

Its wooden handles were painted crimson,
A dried-blood colour, as I didn’t always know.
They were the smoothest things of wood
I’ve ever held. My hands clench,
Remembering them.

He didn’t say much, my Gramp. But
I’d catch him watching me
When we were out there, the two of us
Standing in a pine-tree wood
On a yellowing pine-needle floor, and
Along with the watching there’d sometimes be
An awkwardness in him, something unsure or shy,
Glimpses of all those, which may just have been
What could he do about the years,
Such a jumble when he turned to
Look back—the imbalance between us that
Words wouldn’t fix. And meanwhile
My arms would be stretching out towards him
When the saw moved in that direction,
And then they’d be pushed back until they were
Almost behind me, and then further forward again,
And everything repeating.

When the log started to tilt downwards at
Its middle, meaning it was about to break into
Its two new halves, you had to stop right away
And lift the blade up and out. I’d probably have
Taken my T-shirt off by then, and now I’d
Pick it up and throw it over my shoulder.
We’d walk to the stream where, years and years
Ago, he’d stuck a V-shaped length of tin tightly
Among the stream-bed’s stones. A small saucepan
Was half-hidden among the weeds and he’d fill this
From the water running as from a tap out of
The front of the V-shaped tin. He’d watch
The water settle and clear in his pan and then
Drink all he wanted and rinse the pan out before
Passing it to me. I’d do what I’d watched him do.

All this comes from the two-handed saw which
I’m remembering as much of as I can, only
Because of you, little one, resting among us
In your dream of Eden, and a lot smaller
Than I was then, whose dream never showed
The two of us in a wood together, as we will never be. Coles entered Victoria College at the University of Toronto in 1945. He did a four-year history degree, then a two-year M.A. in English, spending two undergraduate summers in Trois-Pistoles, Quebec, learning French, and one summer travelling in Europe. He had several courses with Northrop Frye and Marshall McLuhan, whom he recalls as the best teachers of his life. In between the two M.A. years, he spent a year in London working in a bookstore, then enrolled at Cambridge from 1952 to 1954, and upon graduating was awarded a British Council grant to live in Florence for a year. It was in Stockholm that he met Heidi Golnitz of Lubeck, Germany, whom he eventually married; they lived in Copenhagen and Switzerland before coming to Canada with their daughter in 1965—supposedly for a visit, but they stayed.

It was only around 1967, in tandem with teaching, that Coles began writing poems. His first collection appeared in 1975 when he was forty-seven. It was followed quietly by several others, but he resisted becoming a public poet-persona. He was sixty-five when Forests of the Medieval World won Canada’s premier literary award. As a poet, Coles has always marched to his own drummer. He was never enamoured of the modernist poets, looking instead to what he has termed the ’Hardy-Larkin line’, those who were able to move their art back towards accessibility and the general reader. Besides his ten poetry collections, Coles has, since retirement, published a novel and a collection of essays and reviews, and translated a collection by the late Swedish poet Tomas Tranströmer.