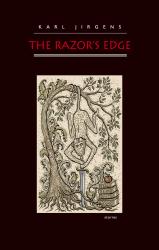 A collection of linked short stories that hopscotches between time and space to explore the haunting hunger that reaches beyond the physical and into the spiritual—for love, for understanding and for truth.

‘Unwillingly, I’ve become part of the story. Questions lie when reconstructing incomplete facts, half-truths, enigmas. What remains is incompletion, interruption. Only the dead know what happened.’

In The Razor’s Edge, Karl Jirgens presents a collection of interlinked fictions that inhabit halfway worlds between past and present, dream and actuality, science and divination. Ordinary daily activities and events lead to unexpected slides into lucid dreams and flirtations with the edge of madness. Drawing on literature and pop culture (from Cinderella and Hamlet to Vladimir Mayakovsky and Anthony Bourdain) as well as the history of twentieth-century genocides (including the Holocaust and the Gulag), these complex, magic realist stories suggest that what seems separate is really interconnected, that the distinction between past, present and future is illusion, and that we might all die of the truth if the truth were truly known.

From "The Freshness of a Dream"

My mother and I are sitting at her kitchen table. Through the glass door behind her, I gaze at the tangled garden. My mother is quietly crocheting a hat for my son. She peers through her glasses. Her old fingers nimbly turn the wool strands on light metal crochet hooks. It’s time for another tea, but I’m held in place by a strange inertia. I ask her about what happened to her brother during the war, my uncle Joe. She has fed me small pieces of this story before, but I’m hungry for more.

I’ve learned that he was tossed into a mass grave, only to be retrieved. The entire nation had been forcibly ‘occupied’. I remember that the bulldozer driver was ordered by a Soviet commander to cover up dozens of bodies. The bulldozer driver refused. He’d witnessed several fingers moving on my uncle’s left hand. They threatened to kill the dozer driver. He rejected their threat. ‘I’m the only bulldozer driver for hundreds of kilometers. If you kill me, you’ll have mass contagion.’ My uncle had been fighting with the partisans, first against the Nazis, then the Soviets. The commander shrugged, relented. Pissed off, he ordered a pair of soldiers to haul my uncle’s body out of the trench. The dozer driver ensured they hospitalized him. I’m told that my uncle was among several partisans sitting in the back of a resistance truck, the kind with a canvas tarpaulin covering the back. The truck driver inadvertently trundled up to an unexpected military check-point. Realizing the danger, the driver stomped on the gas, swerved past the checkpoint barrier, but one of the ground-troops managed to lob a grenade. My uncle was near the back. Knocked unconscious, he was bloodied, blinded, and crippled on his right side. The bodies of the other partisans shielded him. I wanted to know more. My mother kept crocheting. ‘What happened to Uncle Joe, later on?’ This fall it’s been unseasonably warm. A reprieve. Sun dances lightly on shifting shadows beneath the backyard maple. I watch yellow leaves swirl across the lawn. There is a light breeze, and I really should be outside raking. But it is so comfortable in this kitchen and I don’t want to miss what she will say when the spirit moves her. ‘Today is the first of the month.’ ‘October is veļu mēnesis, the spirit moon, the time when they return among us.’ I nod and sip my lukewarm tea. 1If you like, I’ll read your cards.’ I nod again. She puts down the crocheting and clears the table. I think today we should light a candle. She hands me the cards. ‘Shuffle the deck and think about what was behind you.’ I’ve had these readings since boyhood. They always start the same way and are almost always right. It’s uncanny but I no longer question it. When I was younger, I thought she was eavesdropping on my conversations over the phone, or learning of my activities some other way, and as a devoted mother was using the readings to warn me of my own stupidity. It drove me crazy. I surreptitiously hid magazines under the mattress, foolishly forgetting that she was the one who usually changed the sheets. Now, she’s old, lame in one leg, her one good ear is almost deaf. I have to find the right frequencies when I speak, so that her hearing-aid picks up my words. I know she can’t overhear any of my conversations, so I reason there must be something else to her card readings. I let her talk. The hearing aid never seems to work correctly, but I’ve learned that silence and simple gestures work as well as words. She lights the candle and we begin. ‘Now cut the cards three times towards yourself.’ I know this without her saying it, but sometimes she uses a different approach, so I quietly follow directions. She observes the cards in three piles and says, ‘It’s good. You are no longer dwelling on the past, but there is an open space before you. You don’t know what to do yet. Give it time.’ We begin. She starts laying out cards on the table. I remember the day she told me about how she learned this ritual. I was only half-paying attention, mildly intrigued and slightly bored during that ordinary summer day. I remember her words, about how it was, back in the old country, on the farm they used to have. Gypsies coming from the south would visit them in Daugavpils, on route to Riga. There were so many stories about those strange visitors. Daugavpils, sometimes called Dvinsk is near the Russian, Polish and Lithuanian borders. Her neighborhood was mostly Roman Catholic and Jewish. Earlier during the war, the Nazis rounded up the Jews, and my mother visited her former neighbours in the prison camp. It was dangerous. Had the guards known she was bringing food, they would’ve shot her. A blithe smiling girl of fifteen smuggling dark rye bread and other goods in her school bag. She was ‘just visiting’. They indulged her. What could such a young girl do? Sometimes they questioned her on the way out. ‘What did you talk about?’ ‘Not much, the weather, how long they’ve been here. How long they might have to wait before they get out.’ She knew the right answers.

[Continued in The Razor’s Edge]

Praise for The Razor's Edge

‘Karl Jirgens is so hip in his use of his European tradition, that I am looking forward eagerlyto his third story collection. He has a prominent place in my line of favourite Canadian writers.’ Karl Jirgens is the author of several books, including the short story collections Strappado (Coach House Press, 1985) and A Measure of Time (Mercury Press, 1995), as well as the editor of a number of works of literary criticism. From 1979 to 2016, he edited and published Rampike, an international journal of art, writing and theory. He is also a grandmaster of the Korean martial art of TaeKwonDo (8th degree black belt). He lives in Windsor, Ontario.