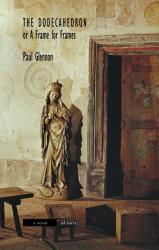 The Dodecahedron, or A Frame for Frames is a kaleidoscopic puzzle-novel ... of sorts. Twelve stories of seemingly different genres cohere into a book of astonishing literary dimension. Stewart Cole of the Quill & Quire wrote that ‘The Dodecahedron never ceases to be about people: how despite the diversity of our obsessions, convergences prevail among us. One rarely sees a book of such scope and ambition succeed so thrillingly.’

Twelve narratives, twelve narrators, twelve genres and twelve fictional worlds collide to spectacular effect in Paul Glennon’s The Dodecahedron, or a Frame for Frames. The second book from the author of How Did You Sleep? takes his adventures in short fiction to strange new regions, where professional polygamists, heretical alcoholics and hallucinating arctic explorers find themselves sharing plot points, character traits and dialogue.

At turns philosophical and farcical, The Dodecahedron makes for intriguing, compelling reading. Each of the book’s twelve chapters has its own style and apparent fictional autonomy, but every narrative finds itself corroborated or undermined by the next. Messages found in bottles, computer-generated dialogues and the lamentations of the world’s last genie shouldn’t have much in common, but their paths constantly intersect in The Dodecahedron, creating networks of allusions and contradictions. The Dodecahedron revels in the art of story making and proves once and for all that the geometry of the dodecahedron is a rich source of comic fiction.

Praise for The Dodecahedron

‘Paul Glennon’s writing is ‘‘unlike just about everything else being published in Canada’’.’

‘To call The Dodecahedron Paul Glennon’s second ‘‘collection’’ would be a little misleading. Images, phrases, characters, and scenarios recur so frequently over these twelve stories that spotting the skewed correspondences becomes a sort of hallucinatory game for the reader, making this wonderful book less a collection or novel of linked stories than a puzzle -- one whose solution remains delightfully out of grasp. ...

‘While it’s difficult not to detect the guiding hand of the author in such an overtly constructed project, Glennon’s presence remains unobtrusive. The characters’ voices guide the tenor of the prose, not vice-versa. So despite wearing its conceptual underpinnings on its sleeve, The Dodecahedron never ceases to be about people: how despite the diversity of our obsessions, convergences prevail among us. One rarely sees a book of such scope and ambition succeed so thrillingly.’

‘The Dodecahedron delivers the tension inspired by true magicians: the longing to understand the reality of an illusion along with the fervent desire to believe in magic.’

‘There’s a lavish intelligence at work in Glennon’s book. He plays with the reader -- joining hands at times with her, at other times pushing her forcefully away -- but this is a fine model for reading: an experience that is once intellectual and visceral. A Frame for Frames is a worthwhile experiment. It makes something old new again.’

‘Readers interested in solving the puzzle are recommended to build a model. One assumes Glennon had one sitting on his desk so that he could keep it in front of him while he was putting the book together. You just can’t hold a structure like this together in your head. In other words, the concept is indisputably there, but also nowhere since it is invisible. The connections, recurrences, and relations are easy to spot, but not the shape of the whole. At this point one can be forgiven for thinking the whole thing is just a stunt, and too clever by half at that. Maybe it is. But it’s also one of the liveliest, smartest, most original books you’ll ever read.’

‘The Dodecahedron is a book about stories and language. Specifically, it is about the freedom and fluidity of words before they are captured in writing. The interplay between stories allows this flow to exist on Glennon’s printed page. Because the details, the meaning and the accuracy of each piece of information is uncertain, the reader must keep speculating about the stories, allowing them to remain alive.’

‘Two major characteristics of postmodernism-self-referentiality and physical texuality-make their way unabashedly into Paul Glennon’s The Dodecahedron. Subtitled A Frame for Frames, this ‘‘novel of sorts’’ consists of twelve interrelated sections that parade intratextuality over intertextuality (i.e., internal echoes within the novel are more prevalent than allusions to other texts) and weave a double helix at every turn.’

‘There is also a hint of Gnosticism in the book, as if part of Glennon is allied with the insane monks of Tenebria, desperate to escape this world of falsehood and waking dreams -- a world where even our senses betray us -- into an ideal world, a perfect realm, even if a realm of perfect nothingness.’ Paul Glennon, born in England but resident in Ottawa since 1975, has been published in Descant, Matrix, Canadian Fiction Magazine, and the Blue Penny Quarterly. He has an MA from the University of Ottawa and currently works as a Human Factors specialist -- which means that he attempts to encourage software to work the way humans expect it to.