The Museum of Possibilities 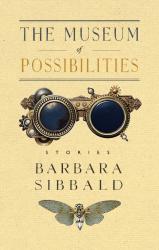 In The Museum of Possibilities, the future is limited only by the imagination—and the choices that we make. This exhibit contains, among others:

The quirky short stories in this collection focus on pivotal moments of intense longing—for love, for power, for fame, for freedom, for revenge, and perhaps most of all, for connection in an increasingly disaffected world.

From "The Museum of Possibilities"

‘Of course, I should have offered.’ She gracefully removes a stack of boxes from one of the chairs, perches them on top of another pile—precariously, it seems to him, yet they stay put.

He sits. His legs are cramped, held in at an odd angle against the press of boxes and books, but his ankle is definitely more at ease. ‘Thank you,’ he says. ‘Now, tell me: What’s all this about?’

‘You’re the first who’s asked,’ she says. ‘I don’t like to show unless there’s interest. I believe that curiosity is life’s force.’

She turns and begins shifting boxes from another pile, finally unearthing the one she wants. Its glossy packaging promises a tool for effortlessly dicing rock-hard root vegetables and pungent onions. She places the box on top of a stack of large books beside him so it’s level with his head. Rather than opening the box from the top, she pulls at the sides: it falls open. His mouth falls open. He feels as though he’s entered another world.

He’s in a tree amidst branches, mottled leaves and roughly textured bark. And there, partly hidden, a nest, containing three robin’s eggs, the pure blue reflecting a perfect summer sky. A small human finger, a child’s, gently touches the edge of the nest. Beyond the nest, other trees tower; it’s a forest, yet more. An orchestrated forest. What an ideal forest might look like. A pair of squirrels is poised on a nearby branch; their chatter is almost audible. And he glimpses a deer lying in the grass below, asleep or at rest. Perhaps dead. It’s like a set in a play, he thinks. Only real. Yet not.

‘It’s beautiful,’ he says after a moment, aware of the woeful inadequacy of his words. He cannot say more, fears he may begin to cry, though he’s not sure why.

Praise for The Museum of Possibilities

‘Shot through with sparks of sly humour and dancing nimbly on the fine line between real and surreal, this collection is an outstanding display of what the short story can do when it finds itself in the capable hands of a talented writer like Barbara Sibbald.’

‘The short stories in The Museum of Possibilities resemble a cabinet of curiosities, one of those small proto-museums first started in the Renaissance by wealthy collectors, containing all sorts of exotic ephemera. In this case, many of these engaging stories take place in the fictional town of Madawan, where it appears every relationship is under siege. A woman in a difficult marriage fears going blind; another woman is a hoarder but also a creator of worlds in miniature; a third employs a strange dream therapy to deal with the loss of an infant. In one quintessentially Canadian story, a woman becomes lost in a snowstorm while returning to her husband from an affair. The snow piles up like her guilt. These are wonderful stories in which the author is able to evoke in the reader all the fear, anger, and emotional pain of her characters. And what characters! In all cases, they are genuine, living, breathing players that come to life on the page.’ Barbara Sibbald is an author, editor and journalist. Her previously published works include The Book of Love and Regarding Wanda. A health journalist for over twenty years, she currently works as News and Humanities editor at the Canadian Medical Association Journal. She lives in Ottawa, Ontario.