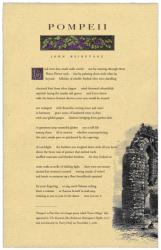 ‘Pompeii’ is Part One of a longer poem called ‘Fresco Magic’ that first appeared in Where We Live (McGill-Queen's University Press, 2016) and was reprinted in The Essential John Reibetanz (Porcupine's Quill, 2017). The poem was also featured on Poetry Daily on November 3, 2018.

The display face is Bodoni Classic Inline, which we have only recently acquired because it seemed singularly appropriate to the title of Jeffery Donaldson's Viaticum (Porcupine's Quill, 2019). In this case the distinctive inline letterform is perhaps reminiscent of the fluting on Doric columns. We are particularly enamoured of the ‘sun-gilded grapes’ as they appear in the headpiece engraving, and of the goat that appears seated at the foot of aqueduct wall.