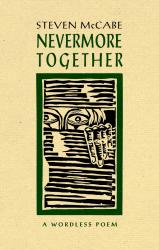 In this wordless poem, the invasion of a malevolent corporate regime causes a peaceful society to become embroiled in disquiet and savage upheaval. A tale of subjugation, protest, and transformation, Never More Together tells the story of what can become of a society that fears the truth.

When the inhabitants of a harmonious Edenic community are invaded by the brutal Butterfly regime, they must learn to leave behind their tradition of complicit silence, find a strong new voice amidst the cacophony of state-sanctioned propaganda, and emerge into a hopeful future of freedom and social consciousness.

Steven McCabe’s visual epic of more than 100 linocuts challenges readers to look beyond the surface, to decipher the layers of meaning in each image, and to immerse themselves in a complex, dystopian world full of symbolic references to our past, present, and possibly future condition.

Praise for Never More Together

‘Hemingway said the old man is an old man and the sea is the sea. Joseph Campbell said the mother goddess is a universal archetype. Steven McCabe made an image of an apple and it started a war.

‘Never More Together can be a fun wordless story or it can be viewed again and again as an allegory of the desire to dominate and the corruption of desire—from the Genesis creation myth to the power of modern protest and social communication.’

In a world that is strange yet weirdly familiar, men and women are watched over by a malevolent, authoritarian police state, a monstrous serpent slithers and coils in gardens and above planets, vast forces drive the lives and fates of a society, and of a man, woman and boy who come together and drift apart in an urban hell, while a savage social protest dances on. A city and a society sink into an abyss.

McCabe is a silent witness to a dystopian creation that he describes in this wordless allegory blending and redefining allusions to Biblical episodes, symbolic stories, social critiques, and a vision of social interaction as one unholy confrontation that threatens to render asunder the bond that unites a man and a woman, both of whom are helpless victims of fate’s inevitability, and the state’s punitiveness. The author sees what can become of a society that fears truth.

A modern, surreal myth, Never More Together comprises series of a dozen episodes set down as both warnings and prophesies. Visual poems every one, the individual prints, carved in linoleum and printed in a near frenzy of activity over the course of a mere forty days, speak in a language all their own. McCabe’s is a personally expressive and unique iconography that mashes readable symbols and densely constructed compositions that mash space and action into taut, formidable and urgent declamatory visual statements.

The prints give a picture of a rich and frightening negative life of struggle and defeat. Haunted by horror, in these silent emblems is a chill, formality that offers vignettes on the Gestapo, civil disobedience, violent confrontation, and of other upheavals that have a contemporary reference and speak of the author’s own imaginative vision. Among the mute clangour of the prints, we also read of a different tale involving the love of a man and a woman cast into this macabre cauldron and challenged to stay together against the odds and the forces of fate

(... Continued in Never More Together.) Steven McCabe is a self-taught multidisciplinary artist born in Kansas City, Missouri. McCabe grew up in the American Midwest, leaving home at 17 to travel in a carnival with a psychedelic tent show. At the age of 19, he immigrated to Canada and supported himself by selling prints of ink drawings door to door at university residences in Waterloo and Toronto, as well as the infamous Rochdale College. He spent 25 years working as an artist-educator, visiting hundreds of classrooms, teaching visual art and creative writing. He has designed and facilitated professional development workshops for educators focusing on the intersection of text and language.

McCabe is the author of four full-length collections including Hierarchy of Loss, Jawbone, andRadio Picasso, and the co-author / illustrator of the chapbook Orpheus and Eurydice: Before the Descent. His work is included in a number of anthologies, most recently in Poet to Poet(Guernica Editions 2012). He has collaborated with dancers and musicians creating numerous multimedia poetry performances, and since 2003 has mounted three solo exhibitions featuring ink drawings, paintings on canvas, assemblage, and video. He is the creator of a Wordpress blog; poemimage, where he addresses poetry with digitally manipulated images. He is also a filmmaker, whose video poems have screened in festivals and online platforms.