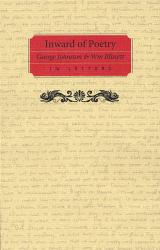 Inward of Poetry presents fifty years of thoughtful and, by turns, chatty letters between poet George Johnston and his good friend and frequent editor, the scholar William Blissett. Edited by former student Sean Kane, this lively collection includes several hitherto unpublished Johnston poems and reveals the development and creative necessities of one of Canada’s revered poets and translators. An essential part of the folklore of Canadian academia in the 1950s and 60s, George Johnston’s poems were recited with glee by readers largely unaware of their publication abroad in the New Yorker, Partisan Review, Poetry (Chicago) and The Spectator. This book shows the making of those poems, and several hitherto unpublished ones, forged in the hard craft of Icelandic saga, American Imagism, and in the voices of family and community Johnston took as his material.

William Blissett enjoys a unique presence in academic folklore today, having seeded it with his perceptions and sayings for over sixty years as an authority on Wagner and the shape of literary modernism, Renaissance epic and drama; the work of his friend, the modernist poet David Jones, and his friend, George Johnston, whose poems he frequently critiqued in draft.

Sean Kane, once a student of both Johnston and Blissett, engagingly presents a friendship told in fifty years of letters between the two men, set in the affectionate, gossipy, aspiring world of English Studies in Canada when it was ruled by A.S.P. Woodhouse and Northrop Frye.

There are more letters for 1954 (fourteen) than for any other year of the fifty years in which Johnston and Blissett wrote to each other. The themes continue much as we see them in 1953: the volume, Imitation and Design; the continued publishing fate of Blissett’s Macbeth piece and of Johnston’s ‘‘The Phoenix and the Turtle’’ article; Johnston’s study of the painter Carl Schaefer; plans to meet at the Stratford Festival (a new institution in the 1950s); gossip about Gordon Wood and other academic colleagues (‘‘MacLean ... discloses that Hornyansky is coming dwadwa & that Hoeniger is en route to London for Ph.D.’’), as well as Malcolm Ross, James Reaney and, always, Millar and Evelyn MacLure. There is first mention of Blissett’s writing to modern poets about the reputation of Edmund Spenser; continued praise of Jay Macpherson; discussion of some modern poets, especially Dylan Thomas and Robert Graves; and persistent attempts by Blissett to force Catcher in the Rye on Johnston. Some of these subjects will be found in other sections of this volume on the correspondence. For the correspondents themselves, of course the most important subject is the mutual editing by Blissett and Johnston of each other’s writing during the period when they both attempted to honour the muses of creativity and scholarship.

For this, we start with the poem ‘‘Roses’’ sent on 2 February 1954, in which Miss Knit, a sort of Blakean Female Will, ensnares the unsuspecting solar deity, Mr. Byers:

Among the roses around behind the house
Snip snap snip go the little cutting pliers;
Sweet Miss Knit, who is a kind of mouse,
Is gathering buds & blooms for Mr. Byers.
Mr. Byers is a kind of a hungry cat,
But he doesn’t pay much attention to sweet Miss Knit;
She loves his magnificent person, which is fat,
And wishes she had to herself his every bit.

Ah roses, roses on Mr. Byers’ table
That lean your thorns above the polished wood,
Miss Knit would borrow your death, if she were able,
To darken her small heart, which is sweet and good;
For certainly Mr. Byers’ great concerns
Overpower his taste for the good & sweet,
And when he flies across the sea & returns
It’s the unremembering and bitter he wants to meet.

‘Roses’ is nice (& so is you. This is St. Valentine’s Day). But whether you can persuade an editor to take all those extra syllables is a moot question (in ‘attention’ & ‘magnificent’ e.g. why not ‘heed’ & ‘massive’ they will say. Your answer is that the reader has to get used to scurrying -- as in the last line of the first stanza, and lopsidedness -- as in the last line of all; otherwise no poem.

The published version shows relaxations throughout, but where Blissett’s argument has prevailed wholly is in the last few lines: the Blakean mythopoeia gives way to ironic sensory particulars....

Praise for Inward of Poetry

‘These letters between William Blissett and George Johnston offer a precious glimpse into a Canadian literary world now largely vanished, an age celebrated in names such as A. S. P. Woodhouse, W. J. Alexander, and Harold Innis, and -- still flourishing in and dominating the Toronto I knew -- Northrop Frye, Earle Birney, Farley Mowat, Robertson Davies, Claude Bissell, Ernest Sirluck, Barker Fairley, and Marshall McLuhan. The two humane, generous, self-deprecating figures whose lifelong friendship and half-century of correspondence lie at the heart of this volume shared a love of poetic craft and painstaking workmanship that, as one of George’s favorite Icelandic skalds put it, ‘‘will be slow to grow old.’’ ’

‘The very lively correspondence of almost fifty years between two writers whose friendship was largely expressed in helpfully criticizing each other’s ongoing work, besides sharing their travels and encounters along with the griefs and joys of daily life -- engagingly edited by Sean Kane, ex-student and friend of both, and presented with his usual elegance by Tim Inkster. There is a problem of balance -- Johnston’s usually short lyrics can be included in the text as Blissett’s (astonishingly many) substantial essays cannot; but Blissett’s wide thinking, wide reading and writerly skill shine out in the letters, inviting readers -- certainly this reader -- to become better acquainted with them. Read in this form, the letters seem a collaborative work left us by two wise and treasurable souls.’

‘This book is the record of a lovely, lingering conversation between a singer, a scholar and a storyteller . . . and in the ways of the best table talk, it is impossible to tell which is which or who came first. Bill Blissett and George Johnston are the gracious correspondents, and Sean Kane is their necessary angel. He is also our genial host for this ceremony of belief in the goodness of friendship and the benediction of good form -- form as the food of faith and the foundation of style, our newest name for the essence, the inwardness, the virtue of a person or a period. And this is a virtuous gathering, conjuring up the people and the places and the period that shaped -- or occasionally warped -- contemporary Canada, and doing so with what Aubrey Beardsley once called the stony common sense of the truly fanciful. Inward of Poetry is rich in generosity and good humour and the saving grace of the imagination pushing back against reality, and not always gently. Its lyric and dramatic and narrative energies are bundled together like firewood, creating a quintessentially Canadian warmth under our northern lights.’

‘As a person, the poet George Johnston combined intellectual clarity, psychological wisdom, and flawless literary sensibility with sophisticated innocence -- he was a heavenly man. Fortunately, he lives on in these letters, where we can get to know him personally and share his friendship with the bracing, nearly omniscient scholar William Blissett.’

‘Inward of Poetry redefines what an edition of letters can be: a story told with a novelist’s power. It is also a former student’s exploration of the vanished world of his teachers, including the values and concerns that sustained English Studies in its golden age -- lifelong friendship, the vocation of the humanist, the leisure that nourishes learning, the dialogue between memory and imagination, and the visionary goal of the university. In the immediacy of anecdote, reminiscence, biography, social history and family album, as well as in the letters themselves, Sean Kane’s teachers become our teachers.’ George Johnston was born in Hamilton, Ontario, on October 7, 1913. Johnston knew early on that he wanted to be a writer, and published early poems (often comic-satiric), as well as newspaper columns, film reviews and plays, during his years at the University of Toronto’s Victoria College, where he studied philosophy and English.

When war was declared, he joined the RCAF and served four and a half years, including thirteen months as a reconnaissance pilot in West Africa. He returned to Canada in 1944, married Jeanne McRae, and completed his MA at the University of Toronto. In between, he taught two years (1947-49) at Mount Allison University, and in 1950, having found teaching to his liking, accepted a post at Ottawa’s Carleton University where, for twenty-nine years, he was a charismatic and much-loved professor of Old and Middle English and Old Norse. His first book of poems, The Cruising Auk, written during the war, was not published until 1959, when he was forty-six.

Sabbatical years were decisive in Johnston’s life. During his first, 1956-57 at Dorking in Surrey, he met Peter Foote of the University of London, who taught him Old Norse, and began translating The Saga of Gisli in collaboration with him. A second sabbatical, in 1967-68, was spent in Denmark and included the discovery of modern Faroese poetry and the first of four visits the Johnstons made to the Faroe Islands. A last sabbatical, 1974-75, spent mostly in Gloucester, England, included a three-week visit to Iceland.

After The Cruising Auk, Johnston published four more poetry collections before the appearance of Endeared by Dark, his Collected Poems, in 1990. A man whose diverse interests included calligraphy, bell-ringing, wine-making and beekeeping, who kept up a wide correspondence and enjoyed reading the classics aloud with his wife, Johnston retired from Carleton in 1979. He died in August of 2004. William Blissett was born in Saskatchewan on October 11, 1921. Reading the modernist poets at age sixteen, he wrote his first published scholarly essay, on T.S. Eliot, while still an undergraduate at UBC. He met George Johnston in graduate school at U of T where Northrop Frye supervised both their theses. Following ten years at the University of Saskatchewan and five at Western, Blissett returned to the University of Toronto in 1965, becoming a long-serving editor of theUniversity of Toronto Quarterly and co-editor of The Spenser Encyclopedia. He retired from teaching, but not from scholarship, in 1987. Now in his ninetieth year, he still gives papers internationally.

Blissett is a writer in the Guy Davenport manner, extensive, encyclopedic and stylish, given to life-long projects at present being resolved into books: essays on his friend, the modernist poet and painter David Jones; on Shakespeare and Jonson; on the influence of Wagner on the literary modernists and of Edmund Spenser on poets alive at the mid-twentieth century (complete with letters from each poet); and essays for the William Morris Society and the Chesterton Society. Traveller, opera-goer, storyteller and wit, Blissett lives in Toronto. Sean Kane took his Ph.D. at the University of Toronto, which led to a tenure-track position in the Department of English there. He left to become the founding chair of Cultural Studies at Trent University. Kane still teaches and writes at Trent, where he is emeritus professor of English and Cultural Studies. He is the author of Spenser’s Moral Allegory (1989),Wisdom of the Mythtellers (1998), and Virtual Freedom, a comic novel that was shortlisted for the Stephen Leacock Medal (1998). He is editor of The Dreamer Awakes (1995), a collection of wondertales told by Alice Kane. Kane is currently nearing completion of a manuscript that sets out the main principles of the thinking of oral, artisan societies, particularly the Haida world of the mythteller Skaay of Qquuna (?1827-1905), whom Kane has studied in association with the poet and cultural historian Robert Bringhurst.