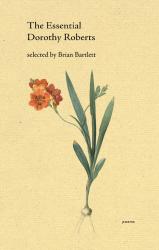 Brimming with powerful imagery and quiet but strong emotion, The Essential Dorothy Roberts gathers together a selection of the best poems from Fredericton-born poet Dorothy Roberts’s six-decades-long career.

Though she lived most of her adult life in the eastern United States, Roberts’s poetry is rooted in the sights and sounds of her native New Brunswick. Her work exhibits a keen intelligence as well as a tough-minded tenderness, echoing the power and beauty of her beloved Maritime Canadian landscape and communicating her longing for the waterways and forests of her homeland.

The Essential Poets Series presents the works of Canada’s most celebrated poets in a package that is beautiful, accessible and affordable. The Essential Dorothy Roberts is the seventeenth volume in the increasingly popular series.

The woods suggested it, the forest of urges,
And we undressed and walked among the leaves
To let the skin release its impulses
In little starts and pleasures lighter than real.

The delicate touch of woods checking the current
Between the flesh and world was most to be trusted
Of all the possible ways of coming to be
More than the personal triumph of the child.

Leaves, fronds, stones, mosses, brooks, tendrils and flowers,
I thank you for the delicacy of those hours
Letting the impulse out, the shower in
Of quick cool contact and the bars of sunlight.

Into the forest vanishing for persuasion
We found the dusky place and golden haven
Fern wand and cedar bough gradually gave—
Still is all lover’s touch partly of leaves.

From a River Boat Dorothy Roberts (1906-1993) was born in Fredericton, New Brunswick. Despite an itinerant childhood and an adult life spent primarily in the United States, her poetry remained rooted in her native land. The daughter of Theodore Goodridge Roberts and niece of Charles G. D. Roberts, she was encouraged by her family early on to write poetry. When she was twenty-one her first poetry chapbook, Songs for Swift Feet, was published under the pen name Gostwick Roberts. After years of raising a family and publishing short stories, she went on to write six more volumes of poetry, often featuring themes of nature, memory and the passage of time, with an emphasis on feelings of alienation and exile from her native land. Roberts died in Pennsylvania, her home for several decades, but was buried in Fredericton near the river she had loved since childhood. Brian Bartlett has published seven collections and six chapbooks of poetry. He has also edited several poetry books, including earlier volumes in the Essential Poets series—The Essential Robert Gibbs and The Essential James Reaney—and the Collected Poems of Alden Nowlan. His recent prose work includes a book of nature writing, Branches Over Ripples: A Waterside Journal (Gaspereau, 2017) and All Manner of Tackle: Prose on Poetry (Palimpsest, 2017). His work has garnered numerous honours, including the Atlantic Poetry Prize, two Malahat Review Long Poem Prizes, and the Acorn Plantos Award for People’s Poetry. Since 1990 Bartlett has taught Creative Writing and various fields of Literature at Saint Mary’s University in Halifax.