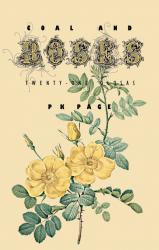 Coal and Roses allows the poet space to both research and to create, looking simultaneously to the past and to her hopes for an uncertain, metaphysical future.

Coal and Roses is a collection of 21 intricately formal glosas, arranged to explore the endless possibilities of language. In this slim volume, P. K. Page offers the reader a wildly eclectic overview of the history of poetry, as well as a master class in the evolution of language as evidenced in the poet’s ‘communion’ with her attributed predecessors. Coal and Roses offers a collection of poems that stand by themselves as commentaries on many of the issues endemic to the varying times, places and circumstances of the aforementioned attributees. Life, death, a palpable need for belonging and the inevitable passage of time are all to be encountered, as one might expect in a work that ranges from the sort of trivial, light-hearted sympathy for the trials of day-to-day life to much weightier reflection on the probability of a greater existence. The use of the glosa form serves to emphasize both the continuity and the evolution of life, and of art.

Included are twenty-one glosas, borrowing on the works of nineteen artists. Spanning numerous centuries, movements, genres and corners of the world, Page explores the works of Wallace Stevens, Theodore Roethke, Margaret Cavendish and Akhmatova amongst others. Coal and Roses is an exquisite work, respectful of the past and hopeful for the future.

Praise for Coal and Roses

‘Though we were not to know it, Coal and Roses was the last book to be published by P.K. Page, appearing months before her death at the age of 93. Therefore it marks the close of a long and creative life. How heartening to be reminded that creativity, zest and curiosity can endure, even flourish, into great old age. Coal and Rosesis wholly unusual and possibly unique. It’s a collection of 21 glosas—a glosa being an intricate difficult form. Each poem begins with four lines from another poet—Anna Akhmatova, Thom Gunn, Zbigniew Herbert and Ted Hughes all feature—and those four lines are then spun and meditated upon by Page herself, to form a new poem, where every stanza closes with a line from the master. The result is a history of poetry, a kind of memoir and a homage from one nearing life’s end, to her forebears and colleagues. It is a fully achieved project, which does what literature does best—abolishes the borders of life and death, time and culture and language, and sets all in a great conversation.’

‘A Companion to the Order of Canada, one of Canada’s highest civilian awards, PK Page brings her excellent expertise to the table with Coal and Roses. An exploration of language using the concept of Glosas, she discusses poetry by channeling sources of many other famous poets to execute her work, staying true to the original while getting her message across with fine technique.’

‘Page dedicates Coal and Roses ‘‘To you, my readers, whoever you be.’’ In the twenty-one glosas that follow, Page demonstrates her skill as a poet who can expand with wit and verve on many themes while following the difficult form of the glosa in which, as outlined in a prefatory note, the four lines of a borrowed quatrain from another poet are used to terminate each of her own four ten-line stanzas. In this more challenging form, the sixth and the ninth lines must rhyme with the borrowed lines, and, of course, the poet’s work must measure up to or exceed that of the poet on whose poem she builds her own.’

‘In Coal and Roses, P.K. Page explores the subtle yet poignant strength of intertextuality. Through her captivating execution of the glosa (a fourteenth-century poetic form that uses borrowed lines), Page invokes the words of her predecessors (in italics) to capture the nuances and facets of the most mundane experiences to overarching meditations on life and the human condition.’

‘A witty, musical writer, Page is equally at ease musing playfully on the power of imagination, writing of love and loss, or reflecting gravely on the environmental crisis. Though she never shied from darker subjects, Page was at her best when celebrating the sensuous beauty of the world, as in the following vivid passage, in which she recollects living in Brazil: ‘‘Beneath the cassia boughs / where fallen yellow blossoms / reflect a mirror image / I barefoot in the petals / trample a yellow world / while small canaries flutter / over the lotus pond.’’’

‘In these poems, Page is clearly enjoying lyrical conversations with those who have inspired her, and these conversations provide a springboard for her creative transcendence.... Page and her contemporaries threw the door open for Canadian poets from the 1960s onwards to pursue their own creative avenues freely.’

‘This new collection, interspersed with short biographies and black-and-white photographs of each quoted poet, is a marvelously Page-esque literary primer, stretching across nations from the 17th through the 20th century.... When I read any well-wrought Page glosa, I am struck by how she manages to call up 36 extra lines that feel essential, as if they have always been there, hidden inside that other poem, waiting to be found.’

Page’s achievement as a poet, her exceptionally long career and her recent death lend this late book a fascination beyond its own successes. As late publications sometimes can, it brings into relief the qualities of earlier ones. Coal and Roses shows the polarity in Page’s poetry between a discursive voice, opinionated and often speaking the language of the times, and one more private, working through words more deliberately, drawing on disciplines of meditation and close scrutiny. Her biography invites some loosely dialectical reading of the two, whether separate or in combination. The more discursive voice may be associated with the British legacy of her upbringing and early career in English Canada, roughly her 20s and 30s; the more contemplative to the long work of reinventing herself, also in her painting and travels, though her 40s. Her transformation as a poet, notably the successes in her 50s, as further confirmed inEvening Dance of the Grey Flies (1981), shows her remaking the Hochsprache of her youth by means of experiential, and especially visual disciplines, where if you really look, and look and look, it seems you come out the other side. The resulting concentration enhances even Page’s more sociable poetry thereafter.

Hunt, hunt again. If you do not find it, you
Will die. But I tell you this much, it
Is not under the stone at the foot
Of the garden, nor by the wall at the fig tree.

You have the whole garden to search in.
So begin. Begin now. Look behind every
shrub, turn up stones if
necessary, dig deep in the black
soil. Do not let night
interfere. Use a lamp to
light the darkness up.
There is no time to lose if
you are to succeed, so
hunt, hunt again. If you do not find it, you

may be sent to ‘Coventry’.
Not pleasant.
No joke. But worse
is indeed possible. So look.
If you need glasses put
them on. Now. In that
way you should not even miss a bent
stalk. I cannot really
talk, nor mention what
will die. But I tell you this much, it

is not where or what you think --
in the woodshed, for instance, and not
behind the wheelbarrow nor in
the compost. Don’t
waste your time
thinking where you would have put
it, had you been asked. You
weren’t asked. But it -- let me assist
you this much in your pursuit --
is not under the stone at the foot

of the broad leafed maple. So stop
your wild surmises.
Time is running out and,
as your life
depends upon finding
it, search meticulously.
And good luck, I’d like you to
succeed.
Remember, not in the greenery
of the garden, nor by the wall at the fig tree.