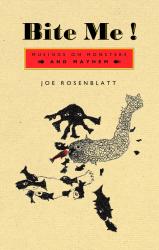 Joe Rosenblatt delights in revealing a fantastical hidden world of ravenous monsters and rapacious critters of all sorts—one in which ‘either you’re the eater, or the one who’ll be consumed’.

In Bite Me!, idiosyncratic observations and provocative musings illuminate an unseen world of creatures both real and imagined.

This is a collection populated by eighty-foot-long boa constrictors and carnivorous pitcher plants. Of colossal clams that inhale noxious volcanic fumes and of bioluminescent ocean-dwelling critters that appear as ghostly mermaids to unsuspecting submariners. It is a collection in which the unfortunate Monster Boy copes with the consequences of schoolyard bullying—and flesh-liquefying stomach acid—while the agoraphobic Birdman ‘strives to ascend skyward’ though he is permanently grounded.

The poems and musings in Bite Me! are interested in ‘the bizarre side of Mother Nature’s handiwork’, from the depths of the ocean to the wilds of the tropical rainforest ... to the cozy hearth of the domesticated housecat. In this collection characterized by isolation and unquenchable need, Rosenblatt celebrates life in all its varied forms while awaiting that moment when ‘time drifting as a bottom feeder makes a meal of us’.

Praise for Bite Me!

‘Joe Rosenblatt offers a phantasmagoria of "the bizzare side of Mother Nature’s handiwork" in a collection of poetry that showcases creatures and beasts from reality and the farthest reaches of the imagination. Domesticated felines and the denizens of the tropical rainforest are here, as are bioluminescent fish from the bottom of the ocean and "flesh-liquefying stomach acid."’ —Quill and Quire

‘[Rosenblatt’s] sure, steady authorial voice and his courageous willingness to look into the luminous darkness at the centre of the human heart make this difficult material into a compelling beauty.’ —Tom Sandborn, Vancouver Sun

‘Reading [Rosenblatt’s] poems or looking at his drawings is a slightly mad, giddy, freewheeling ride. It seems to me that his work is not a journey or quest because he is already where he wants to be, happy among the sometimes bewildering world of shape-shifters.’ —Marta Zaborska-Quinn

‘In Bite Me! I am letting the famished imagination out on a field trip ... the bizarre side of Mother Nature’s handiwork in the wilds of a tropical rainforest. I have this obsession with undiscovered gigantism in boa constrictors assumed to be extinct ... leafy carnivores with a taste for human flesh ... an octopus snacking on a seagull ... a conger eel going for the leg of a diver....

‘In this new collection of prose and poetry, Joe Rosenblatt gives his ravenous muse full rein, taking the reader to a world peopled by monsters both plant, animal and human, and the rule of eat-or-be-eaten becomes a metaphor for the poet’s own urge to nourish and satisfy the sensuous and sometimes terrifying demands of his own imagination.’ —David Berry

‘Bite Me!, an octogenarian’s repast of ghastly undersea and tropical monsters, is Rosenblatt’s own Little Shop of Horrors’ swan (or perhaps cephalopod) song to the preoccupations of a lifetime: the oceanic, the creaturely (and especially the feline), the rapacious, the erotic, all couched in tautly disruptive prose pieces and his famously rutting sonnets, culminating with a wild, melancholic sequence on the misadventures of Monster Boy and later, in ruminations on himself as Birdman. For all its weird humour, this is a book of reckoning, a powerful plumbing of the salty darkness and the ever-encroaching hereafter. Read Me, unafeardly, it orders you.’ —Catherine Owen

‘Joe Rosenblatt’s obsessive imagination powers on through his geriatric years. One would think that after decades of producing countless books of poems and drawing about creatures: ants, bees, snakes, frogs, crocodiles, fish, birds, trees (yes trust me trees), that Rosenblatt would become more subdued and less demonstrative in his old age. Not a bit. The poet in his old age is going out on his shield leaving behind a literary tapestry that evokes the juices of life the DNA in an array of outrageous creatures--some familiar some invented.

‘This is a zany compendium of prose poetry and brilliant sonnets (illustrated by the author’s drawings) that reveal an astonishing mind that examines every nook and cranny of eccentricity in the master’s repertoire and creates a collection of poems and drawings that reflect a dazzling view of the tribulations of the human condition in a world dominated by nature’s "mutants and their pals". A whole array of interacting creatures in everyday situations including a bizarre character named Monster Boy who zaps a protagonist with a "spray of sizzling stomach acid" that he secretes from his foot.

‘Bite Me is a thrilling spiritual affirmation by one of our nation’s most original literary practitioners.’ —Allan Safarik

‘Joe Rosenblatt’s surreal conflations of the romantic and the grotesque have shed all romance and have been mashed up into riotous acts of insatiable gluttony. In his poetry and visual art, animals have always had the staring role and play the parts of spirit guides offering an unacknowledged world that brings us back to a more compassionate version of our own. However, Bite Me! is a bestiary of revenge where his fish, dogs and trees have morphed into devouring monoliths that do not offer, but guarantee, a murderous embrace. Along with Rosenblatt’s lexical rollick that jigs us into the lofty realm of the profound, this collection of mock scientific anti-romance is serious business bereft of any solace to be found in the natural world. Even the most delicate flowers are predatory beasts and have the power to devour despite their innocuous size—everything is being eaten, not only by others, but also by itself. Bite Me! is a treatise to the inevitability of being bitten and a literary act of biting back where, in the end, the poet is devoured as he turns his teeth against his own ravenous muse. ’ —Karen Moe

In Bite Me! I am letting the famished imagination out on a field trip. It matters little whether I am following the explorations of ethnobotanists or zoologists—what I am keenly interested in is the bizarre side of Mother Nature’s handiwork in the wilds of a tropical rainforest. I have this obsession with undiscovered gigantism in boa constrictors assumed to be extinct, relegated to prehistory along with the dinosaur. I want to chant a mantra in celebration of those lengthy elongated reptiles: ‘Come out of hiding, I know you are there.’

But are they there, those primeval super-snakes slithering about, who according to some researchers in herpetology are a mind-blowing eighty feet long with a girth of five or more feet—besting those present-day anacondas half that length with a girth, on average, of a mere metre?

What especially provides a stimulant for the appetite of my hungry muse, more than snakes with lengthy trains, are pitcher plants who manage to lure small mammals to their deaths. To sustain those monsters, the poor devils end up liquefied as essential protein in their bellies.

And as if this bent fascination in giant reptiles isn’t enough, I am earnestly interested in hearing about man-eating plants. As yet, I have not seen any scholarly articles in any reputable science journal having to do with those leafy carnivores preying on humans, but that doesn’t mean those floriated monsters, having acquired a taste for human flesh, aren’t around—waiting patiently for their next weighty meal in some steamy setting in the Amazon basin. In the meantime, I will settle for the commonplace: an octopus snacking on a seagull, or a Conger Eel going for the leg of a diver.

What especially fascinates me and excites my ravenous muse is the marine life existing at the bottom of the deepest oceans, bioluminescent critters that appear like ghostly mermaids to mariners gazing through the window of their bathysphere. It borders on the supernatural, for what is one to make of those colossal clams inhaling the noxious fumes of an active volcanic chimney belching fire, or a lumbering gigantic squid approaching that bathysphere with the intention of embracing it with its sprawling tentacles?

‘Bite me!’ said an extended leg to a conger eel
comfortably sheltered deep inside a briny cave.
Gritting all his teeth—he was not a pretty sight.
A lengthy demon, more a snake than a fish
lashed out—tore off a generous hunk of meat.
His vibrating jaws invoked a symphonic poem
as he wriggled his body and beamed out a smile.
‘You’ve eaten him!’ shrieked the remaining limb.

Soon it, too, was eaten by that burbling diner
who, in exalting praise of his meal, spewed out
a stream of flesh, bits of bone, bristle, and blood.
I kept on descending into a malaise of despair
while each of my arms pleaded ‘Bite me!’
to an approaching monster who wore my face. Joe Rosenblatt is an accomplished author and artist who, over the course of a five-decade career has produced over twenty books of poetry, fiction, non-fiction and visual art. He was the second poet to be published by Coach House Press, which released The LSD Leacock in 1966. Rosenblatt has since received several major awards, including the Governor General’s Award for his poetry collection Top Soil, as well as the B.C. Book Prize for Poetry Hotel in 1986. He lives in Qualicum Beach on Vancouver Island.