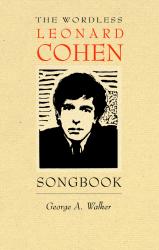 The Wordless Leonard Cohen Songbook is a graphic retrospective of Canadian singer-songwriter, poet and novelist Leonard Cohen’s career. Consisting of 80 black and white wood engravings, the book was crafted by master engraver George A. Walker in honour of Cohen’s 80th birthday.

In The Wordless Leonard Cohen Songbook, master engraver George A. Walker provides a new perspective on a man whose words have captivated generations.

Best read to music, The Wordless Leonard Cohen Songbook presents images of Cohen’s iconic public persona alongside vivid interpretations of his ever-evolving work. The engravings compose a biographical mosaic that invites readers backstage, behind the curtains of Cohen’s critical and commercial acclaim. Some scenes are drawn from history; other depictions arise from imagination and interpretation. These images encourage us to search beyond the visual elements and to see in them a poem, a song, a meaningful turn of phrase. They urge us to look beyond the black and white and to consider Cohen’s life and work through the lens of our own experience.

The Wordless Leonard Cohen Songbook originated in celebration of Cohen’s 80th birthday as a limited edition of 80 copies hand printed in Walker’s studio in Leslieville, Toronto.

‘The Wordless Leonard Cohen Songbook demands close and careful viewing. In this, it is like cinema, or the photographic work of a Richard Avedon or Diane Arbus. Each image is full, suggestive and rich in context and style.’

This book is an 80th birthday present to Leonard Cohen. A tribute to his novels, poetry, and music, it is a narrative without words.

This is a coded narrative. The images are chronological starting with the young Leonard Cohen on his tricycle and ending with an image of Cohen with a nurse. I took that last image from a story he told at a concert I attended, where he imagined himself smoking and being cared for by a young nurse. Many of the other images were inspired in part by Sylvie Simmons’ biography, I’m Your Man: The Life of Leonard Cohen (2012). And of course I was influenced by the poems, lyrics, and two novels of Leonard Cohen.

I wanted to play with the way the image of Leonard Cohen appears in pop culture. I sought out symbolism behind the number 8, which is significant in Cohen’s life and will help readers decipher the narrative. I made 80 copies of the hand-printed edition of this book. There are 80 wood engravings with images that mark points in Cohen’s life. Cohen is a Zen Buddhist monk, and the noble eightfold path to enlightenment is a significant teaching of the Buddha, who described it as the way leading to the cessation of suffering (dukkha) and the achievement of self-awakening. The first step in the path is Right View, and that is certainly part of the question I asked as I worked on these images: What is the right view of the life of Leonard Cohen and the popular culture that surrounds him?

There is no single key to the reading of this book. Although knowledge of people, places, and relationships in Leonard Cohen’s life will help readers recognize the images and show their significance, I encourage you to bring to the narrative your own associations and recognition of the players and scenes. Read the images with Leonard Cohen singing in the background while you sip a glass of wine and flip through the 80 engravings I’ve conjured to frame a complex man into a series of pictures. Here are clues to some of my choices and placements. The eighth engraving is a portrait of the Spanish poet Federico García Lorca (1898–1936), whose work Cohen loved so much that he named his daughter Lorca Cohen. (The lyrics of "Take This Waltz" derive from Lorca’s poem "Pequeño Vals Vienés.") The fourteenth engraving is of Kateri Tekakwitha, a seventeenth-century Algonquin-Mohawk saint who fascinated Cohen and is featured in his novel Beautiful Losers. I made a connection between Kateri and the number 8 by using her birth date—the 17th of April (1+7=8). Among many others, you’ll find portraits of poets Irving Layton and Allan Ginsberg; publisher Jack McClelland; author Pierre Berton; singers Judy Collins, Joni Mitchell, Jimi Hendrix, Janis Joplin, Lou Reed, and Nico; artist Andy Warhol; songwriter / record producer Phil Spector; Marianne, Cohen’s Hydra Island muse; and the two Suzannes in his life—Suzanne Elrod (his ex-wife), and Suzanne Verdal (the subject of his song). I did not include everyone in Cohen’s life—just those I thought would make interesting engravings. My apologies if I left out someone important to you.

Cohen’s compassion for others is seen in his music, novels, poetry, and art. It is one of the elements of his work that has profoundly affected me, his deep empathy for others. Famously during a concert at a mental hospital, Cohen stopped to listen to a patient who was heckling. The man, who had a triangle missing from his skull, hollered, "Okay, big-time poet, big-time artist, you come in here, you’ve got the band with you, you’ve got the pretty girls with you, you’re singing all these pretty words and everything, well what I want to know, buddy, is what do you think about me?" Cohen stopped playing, left the stage, walked over to the man, and began to hug him. I made an engraving of this event because it seemed to represent compassion for the underdog as well as genuine understanding of the inner struggles we all face. "Forget your perfect offering," Cohen observed. "There is a crack in everything. That’s how the light gets in." Those words speak of hope within despair.

This book is a celebration, and I make no claims of knowing the man beyond what he has offered us through his words and music. If you wish, try discovering relationships between engraving numbers, sequences, and visual elements. And as you do, remember this verse from "Anthem":

George A. Walker (Canadian, b. 1960) is an award-winning wood engraver, book artist, teacher, author, and illustrator who has been creating artwork and books and publishing at his private press since 1984. Walker’s popular courses in book arts and printmaking at OCAD University in Toronto, where he is Associate Professor, have been running continuously since 1985. For over twenty years Walker has exhibited his wood engravings and limited edition books internationally, often in conjunction with The Loving Society of Letterpress (and The Binders of Infinite Love) and the Canadian Bookbinders and Book Artists Guild (CBBAG). Among many book projects Walker has illustrated two hand-printed books written by internationally-acclaimed author Neil Gaiman. Walker is also the illustrator of the first Canadian editions of Lewis Carroll’s Alice’s Adventures In Wonderland and Alice Through the Looking-Glass books (Cheshire Cat Press). George A. Walker was elected to the Royal Canadian Academy of Art for his contribution to the cultural area of Book Arts.