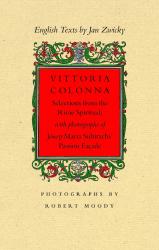 The first woman to achieve wide recognition as a poet in Renaissance Italy, Vittoria Colonna was known for her ardent, but also deeply spiritual, verses. This volume reproduces ten of her sonnets in the original Italian alongside new English versions of compelling simplicity, and complements both with a sequence of moving black and white photographs. Governor General’s Award winner Jan Zwicky gives Colonna’s spiritual insights a contemporary voice, while photographer and noted mathematician Robert Moody paces her words against a visual meditation on the Passion story, as conveyed by Subirachs’ sculptures for the basilica of the Sagrada Familia in Barcelona. The volume’s juxtaposition of poetry and photography illuminates the passion, reverence, and timelessness of both Subirachs’ and Colonna’s work.

Vittoria Colonna was born into a rich and powerful family at Marino, near Rome, in 1490 or 1492. She was betrothed at a very young age to Francesco Ferrante D’Avalos, and in 1509 was married to him. They lived together near Naples for two years before D’Avalos left to fight in the wars against the French. She saw him only infrequently after that, although they corresponded. There were no children, and in 1525 D’Avalos died as a result of injuries sustained at the battle of Pavia.

Colonna retreated to the convent of San Silvestro in Rome and professed a desire to take orders but was forbidden to do so by both her brother and the pope. It is thought that, although they belonged to opposing factions, both men were alert to her political value as a marriageable property and did not want her sequestered in a convent. Colonna did not, however, remarry, and this refusal appears to have been crucial to her success as a writer.

She made her reputation as a univira—a once-married woman who remains loyal to her dead husband. By this means, whether innocently or with forethought, she was able to defuse the intense hostility usually displayed towards women who attempted to cultivate a public voice. Such women, unless they were nuns of spotless repute, were routinely denounced as lascivious whores—insufficiently under the thumb of their male relatives, and so likely to subvert the lines of patriarchal inheritance. But the adoring married love Colonna celebrates in her early poems, the so-called rime amorose, was regarded with approbation by the male establishment, despite its secular nature. And so she became a model for other women poets of the period: they were subsequently able to find their way into print citing Colonna as their exemplar.

At first Colonna’s work circulated privately, but as her reputation grew, so did the interest of publishers. In 1535, ten years after D’Avalos’s death and at the end of her self-imposed period of mourning, Colonna allowed a sonnet she had composed for Pietro Bembo to be published in the second edition of his own Rime, which Bembo brought out in 1535. In 1538, Rime de la Divina Vittoria Colonna Marchesa di Pescara was published, without Colonna’s authorization, in Parma by Philippo Pirogallo. Thirteen subsequent editions followed during her lifetime, and nine after her death. The first four of these contained only selections from the rime amorose, but all subsequent editions, starting in 1539, included examples of her so-called rime spirituali, the meditative religious poems to which she turned in the later part of her life.

In the late 1530s, Colonna returned to San Silvestro. An intense friendship with Michelangelo began in this period, and she compiled a gift manuscript for him around 1540, consisting of 103 rime spirituali. The manuscript is plainly bound and there is evidence that Colonna closely supervised its preparation. In many instances, versions of the poems that appear in the manuscript are materially different from versions that appeared in print. About the same time, Michelangelo gave her a series of three presentation drawings exploring Christian themes that figure centrally in Colonna’s work. The two are said to have talked long hours together, and they wrote to one another frequently. Michelangelo’s sonnets and madrigals to Colonna are among the finest and most passionate he wrote: it appears that she was the last, and perhaps greatest, love of his life. Colonna’s sonnets are more oblique in their address; it is always possible to read them as purely religious meditations. Nonetheless, if we imagine them written for and presented to Michelangelo, there can be little doubt of her deep and intimate regard.

Colonna was deeply interested in religious reform, and from the late 1520’s was repeatedly drawn into association, and in some cases close friendships, with reformers. The presence of reformist ideas is marked in the sonnets, particularly the idea that genuine faith rather than institutional observance is essential for salvation. Colonna does not write, however, as someone attempting to paraphrase ideas not entirely her own. She writes with the directness and intensity that attend personal vision. Indeed, central images and core vocabulary are carried over from the rime amorose into the rime spirituali to striking effect. Her work is—to use a word that figures frequently in her own poetry—ardent. And it was this, I believe, that drew Michelangelo most strongly to her. He found in Colonna someone who understood life as he did: a passionate endeavour to come to grips with spiritual truth.

Colonna died in poor health in the Convent of Sant’Anna de’ Funari in 1547. Michelangelo was distraught at her death and following it retreated from society for the remainder of his own life. Jan Zwicky is a poet, philosopher and musician whose work is often cited for its intense lyricism. She studied philosophy at the University of Calgary, then earned her Ph.D. at the University of Toronto, and subsequently taught at a number of North American universities. She is a prolific essayist and the author of a dozen books, includingLyric Philosophy and Wisdom & Metaphor. Her poetry has won the Governor General’s Award (Songs for Relinquishing the Earth, 1998), the Dorothy Livesay Poetry Prize (Robinson’s Crossing, 2004), and numerous other accolades. Originally from the prairies, Zwicky now lives on Quadra Island, British Columbia.