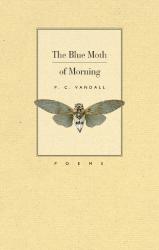 In The Blue Moth of Morning, P C Vandall by turns acknowledges, embraces and subverts clichés of female relationships, emotions and bodies, exposing the inner tumult women often try to conceal under a thin veneer of aplomb.

Full of wit and wordplay, P. C. Vandall’s The Blue Moth of Morning reveals the anarchy that often reigns behind an outward illusion of female self-control. These poems remind us that love is not blushing brides, rosy-red cheeks and ruby lips; that idols can tire of being hailed like cabs, evoked in the night and preyed upon by sinners; that pants can sing a woman’s shame; and that even salmon know when it’s a good time to run.

By turns appreciative and deprecatory of the sundry facets of life, Vandall writes as someone who recognizes that marriage can be a frying pan you swing at your spouse—and that you can miss the mark but still make a point.

Maybe she’s bored of being the blessed Virgin,
being placed on pedestals and pulpits, adorned
on altars and chapel ceilings. She’s had enough
candles lit at her feet to burn Heaven down

forever. Maybe, she’d prefer to drape her blue
self over a bar stool, ponder life without
the drapery and hardware. She must be tired
of being hailed like a cab, evoked in the night,

and preyed upon by sinners. What she needs is
detox for the divine —to rehab old habits.
I imagine her lifting the veil and falling
like a rain cloud onto a street. She follows

footprints into a watering hole, surrenders
the life preserver and orders a Bloody
Mary. She tries to forget the eternal tides
that moon over her each night. She’s fed up with figs

and fish, wants to suck the blue marrow from a rib-
eye steak, dip wings in hot sauce and let devilled
eggs dissolve in her mouth. She doesn’t want a man
who makes things from scraps of wood, nor one who totes

nets and tackle. She wants to tremble like wild
wisteria, throw olives into a parched wind
and no longer appear as the nun getting none.
Maybe, Mary just wants to be idol no more.

Ever see a bird trapped in a building,
the frantic swooping about, the banging

into windows, the unclear exits?
Mostly, they go unnoticed, a gray fog

of feathers lifting up to the rafters,
only to sift down like snow without a branch

of light to land on. With each passing hour,
the bird becomes more erratic, less bird,

more stone. It zigzags across the room,
smashes into windows and then falls

like a cloud on a clear mountain lake.
Oh, to be that wild and then so broken!

Make what you will of this; I let him in
and closed the door swiftly behind him. P. C. Vandall is the author of three collections of poetry: Something from Nothing, (Writing Knights Press, 2013) Woodwinds (Lipstick Press, 2013) and Matrimonial Cake (Red Dashboard, 2014). Her work has appeared in numerous magazines in Canada as well as England, Ireland, the United States, India, and Australia. She resides on Gabriola Island with her husband and two children.