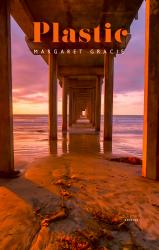 Plastic presents twelve linked short stories that unfold the tale of Debbie Pearce, a former pageant queen who struggles to balance the responsibilities of motherhood with her relentless pursuit of the American Dream.

Deborah Pearce has it all. The former Miss America lives an enviable life in La Jolla, California, with a modelling career, a doting husband, two kids and all the fashionable clothing money can buy.

Somehow, it isn’t enough. Image-obsessed Debbie is plagued by dissatisfaction, anxiety and an unquenchable desire for admiration. Her once-promising career is stagnant, the value of her brand diminishing with every passing day. Her two children, neither beautiful nor charming, become petulant and resentful in the face of her ill-concealed disappointment, acting out in ways that have far-reaching consequences for the entire family. But Debbie refuses to let that stop her from striving toward the life she craves ... until one day her seemingly perfect world pulls her under, threatening to drown her in disappointed hopes.

Told from the perspectives of eleven interconnected characters, Plastic is a story of loneliness and longing, of alienation and acceptance, and of the never-ending pursuit of the American Dream.

That summer I lived for Sundays. The minutes sped by when I was with Deb, while the rest of the week dragged on. Our parents didn’t have money for summer camps, so Jason and I hung out with our friends on the beach and played pick-up games on the playground. My school friends complained that I worried too much about my skin and nails and they teased me about pretending I was rich when I wore the clothes Aunt Deb bought me. But when I hung out with Tiff, she made fun of me now, too.

‘Wanna walk down to the beach?’ she asked one Saturday afternoon at her house. She sat on the edge of the pool and kicked her feet to make waves. Late August sun burned at its brightest intensity. The city waited for the heat to break, the marine fog to roll in, anything to shatter the high pressure.

‘Is your mom coming home soon? We could practice pageant walking.’ I wore a pink bikini and strutted back and forth in wedge sandals, trying to sashay.

Tiff jumped up. Her green and blue tankini shimmied over her stomach. ‘This is you.’ She pranced around with her nose in the air, her thighs jiggling with each step. Water dribbled down her shins onto the deck.

‘Stop being such a retard.’

She stuck out her tongue. ‘You’re the retard.’

‘I’m walking the way your mom showed me.’

‘My mom is a model.’ Tiff picked up her lime green flip flops, sneered at them for a second then hurled one at the fence. ‘You’re just a wannabe.’ The smack echoed across the deck.

‘Oh, yeah?’ I looked for something to throw but saw only furniture, pieces too big to grasp. ‘Well, at least I’m beautiful.’

‘Your mom.’ I puffed up my chest. ‘She thinks I should be her daughter.’

‘Margaret Gracie’s Plastic revolves around the life of Debbie, a former Miss America, and the power and damage her extraordinary beauty can wield. Via Gracie’s deft storytelling in multiple points of view, we’re transported into a world where appearances hold massive importance—at a cost that goes far beyond skin deep.’

—Julie Paul, author of The Jealousy Bone and The Pull of the Moon

‘Ms. Gracie has created in Pearce a character we both despise and sympathize with, a combination that is always difficult to pull off.’

‘This collection of interwoven stories offers a devastating examination of the current cultural belief that money and beauty are at the heart of happiness. Mentoring Margaret Gracie a few years ago, I was struck then, as I am now, by her critical understanding of these ‘‘plastic’’ characters whose lives she dissects with a sharp and clever knife, but also with great compassion for their struggle ... each one of them trying to find some deeper, more meaningful reality than the superficial values encasing and imprisoning them. The retired beauty queen Deb, whose ambitions are the focal point around which most of these stories turn, will remind many readers of Amanda, the mother in The Glass Menagerie: great harm can be done by parents who do not allow us to be the people we really are.’

—Isabel Huggan, author of Belonging: Home Away from Home Margaret Gracie has worked as an ESL instructor, translator, communications consultant and as a writer and editor for the federal government. Her short stories have been published in Canadian and American journals as well as in a British anthology. Plastic is her first published book of fiction. She currently lives in Victoria, BC in her dream home overlooking the harbour.