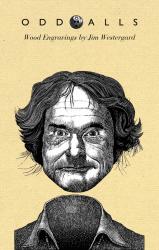 They say truth is stranger than fiction. In Oddballs, Jim Westergard proves it.

This collection of wood engravings accompanied by short, tongue-in-cheek biographies showcases forty fantastically detailed, warts-and-all portraits of some of history’s most peculiar figures. Jim Westergard creates a veritable rogues’ gallery, populated by notorious historical rebels and eccentrics like Rasputin, Pope Joan and Ned Kelly as well as lesser-known oddballs such as octogenarian bank robber Red Roundtree and Mike the headless chicken. From victims of spontaneous human combustion to the masterminds behind archaeological hoaxes, Oddballs pays tribute to the zany, bizarre, mischievous and just plain odd rascals who, by accident or design, have found their way into the annals of history.

The dictionary defines ‘odd’ as: ‘a—left over after others are paired or grouped; b—separated from a set or series, c—not regular, expected, or planned; d—encountered or experienced from time to time; e—differing markedly from the usual or ordinary or accepted: PECULIAR. Synonym: see STRANGE.’

This is a collection of forty wood engraving portraits of people who were out of the ordinary, unique, peculiar or strange. There are victims and victors, some worthy and some unworthy, and some who just happened to be in the wrong place at the wrong time. History has been very generous with its supply of oddballs and the walls of an oddball gallery could stretch to infinity. There are, no doubt, more oddballs walking the earth today, awaiting their portraits ... and an unlimited supply awaiting us in the future. So how did the oddballs in this collection get here?

When I come across an article in a magazine or newspaper, or a story in a book, about someone who has done something odd or has been in a situation I consider odd, I make a note of it or clip it out. These notes and clippings go in a file in an old grey filing cabinet in my studio, along with other thoughts and ideas that could someday stimulate a print or a drawing. Sometimes I might hear of something during a conversation with a friend, or someone might send me something they find extraordinary. For instance, I found out about Jean Baptiste, the 19th century gravedigger when my sister LoAnn sent me an article from a magazine. I heard about ‘Frozen Dead Guy Days’ in Nederland, Colorado while living in Denver. The story of Emperor Norton was a local tale told around San Francisco when I lived in the Bay Area. I watched Marvin Heemeyer’s bulldozer ride through Granby, Colorado on the TV news one night. When I shared my wood engraving, ‘Burgess & Cogswell’ with Barry Moser he told me that the word ‘blurb’ originated with Gelett Burgess. You never know where you’re going to find out about an oddball. Jim Westergard was born in Ogden, Utah in 1939. He was educated at a variety of colleges and universities in California, Arizona and Utah where he completed his BFA and MFA at Utah State. Westergard moved to Red Deer in 1975 and taught at Red Deer College until his retirement in 1999. He became a Canadian citizen in 1980.

Westergard continues to create wood engravings on his cantankerous old VanderCook SP-15 proof press which he has affectionately named the ‘Spanish Fly’.