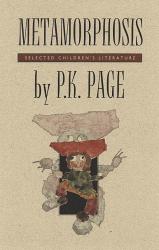 Metamorphosis collects a selection of esteemed Canadian writer-artist P. K. Page’s poetry, prose and plays written for and about children.

The impressive oeuvre of P. K. Page spans genres, formats and art forms, but through it all, the child and the childlike remain integral aspects of imagery and meaning.

The verses, plays, fables and essays in Metamorphosis celebrate the child’s unique ability to look, to see, to fashion immense worlds out of the smallest of things; they affirm the importance of fun, nonsense and language play; and they seek to impart spiritual wisdom through rich, complex narratives whose lessons of transcendence and metamorphosis amuse and astonish young readers.

In this sixth volume in the Collected Works of P. K. Page, editor Margaret Steffler explores Page’s diverse forays into the fantastical, dreamlike worlds of children’s literature, documenting Page’s ongoing efforts to recover the mysterious and elusive source of childhood. In so doing, she reveals the ways in which Page provides readers of all ages with the ability to throw open the doors between youth and adulthood, and to rediscover the imagination and vision of days gone by.

From "A Flask of Sea Water"

Once upon a time in the mountainous, land-locked Kingdom of Ure, there lived a goatherd. And every morning when the dew lay in the valley, he drove his goats up to the high meadows where the air was clear and the grass was sweet. And every evening when the sun dropped behind the topmost peaks of the westerly mountains, he drove them down to the valley again. And the months passed, and the years, as peaceful and happy as the goatherd himself.

Now one day, as he and his goats were crossing the King’s Highway, the Princess happened to be approaching in her carriage.

’Make way! Make way for the Princess!’ cried her outriders, so the goatherd, herding his flock to the side of the road, stood respectfully back.

The Princess, who had been sleeping, was awakened by the noise and, curious, pulled aside her curtains just in time to gaze straight into the eyes of the goatherd.

Never had the Princess imagined such eyes. Were they brown or were they gold? She could hardly tell. But they were more beautiful than any she had ever seen and they looked right into her heart.

And never had the goatherd imagined such beauty. A newborn doe, a pearly sunrise in the mountains, wild flowers in the meadow—these were all beautiful things, and each time he saw them his heart turned over. But the Princess was more beautiful still. Her hair was black and glossy as a raven’s feathers and her eyes—how could he have known that eyes could be so large and so blue? Although he had seen her for no more than a passing second, he stood dazed, rooted to the spot, staring after her carriage until it was out of sight.

From that moment the goatherd’s life changed. The face of the Princess filled his dreams; it accompanied him on his walks to the high pastures. Where once he had seen flowers and the first small strawberries, now he saw only the Princess. Waking or sleeping he could think only of her.

Finally—unable to bear his life without her, and determined to see her one more time—he left his goats in the care of a trusted friend, slung his goatskin over his shoulder and set out on the long, hard road to the palace.