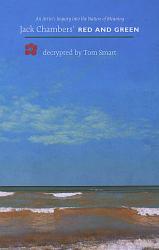 In 1968, Canadian artist and filmmaker Jack Chambers was diagnosed with leukemia. Faced with his own mortality, Chambers began a programme of research into the nature of his own immortality. From that starting point the artist embarked on a nine-year journey that would ultimately take him to the end of his days. In his search, Chambers consulted many sources: philosophers, scientists, poets, priests, mystics and clairvoyants. Using the metaphor of the complementary-colour contrast of red and green, Chambers examined life’s inherent paradoxes, resolutely searching for synthesis. What resulted was ‘Red and Green’, a collage of quotations and ideas – a visual and literary mosaic – photocopied and diligently pasted into ring binders.

The manuscript called ‘Red and Green’ has spent the greater part of its existence closeted in a studio, a basement and an archive. Today, Tom Smart, with remarkable care and persistence, presents Jack Chambers’ Red and Green, Chambers’ final thoughts on the purpose of the artist in society.

From "Down and Up"

At the core of ‘Red and Green’, Chambers turned his agile mind to the distinction between being and existence, our relationship to God and to nature. He writes that, ‘the recurring theme of “God is Love” appears to mean exactly what it says; that there is a force, an energy, that binds the cosmos together and moves always in the direction of its harmonious action ... [In human beings], this force emerges and expresses itself as love, and this is the “spark of the divine” in each of us.’ In no other quotation comprising the densely rich mosaic of the manuscript, does Chambers so succinctly express his thesis. The reconciliation of opposites – down and up – and synthesizing the dialectical nature of being and spirit, body and nature, object and subject is made manifest through the force and energy of love. Love unites opposites and reconciles disparate energies, blends complements. Moreover, Chambers asserts that when the force of love (the spark of the divine) is ‘acknowledged and reinforced by the culture’ it contributes to humanity, relating harmoniously to one another, to the rest of the universe and ‘to move forward towards the most unique and awesome self-fulfillment.’

Just as it appears that Chambers has given us a moral centre to his manuscript, resolving the many threads which, up to this point he had been weaving, he opens another tangent to explore. If anything, the nature of the inquiry at the core of ‘Red and Green’ does not advocate one to be passive. On the contrary, Chambers vouches for a hybrid form of contemplation that calls one to be active. To deny the potent agency of the force of love to lead one to be redeemed is to risk the energy being inverted and perverted to cause one to hate, hunger for power, be greedy and ‘the real possibility of ... disrupting the expression of ... energy as to end [our] part in the cosmic design.’ He admonishes his readers, challenging them to tap into the energy of the universe and to accept the challenge that human beings are ‘a part of the energy of the universe and can only function harmoniously within it through [the] capacity to love – infinitely.’ What began as an artistic journey in ‘Red and Green’ has moved through the paths of a perceptual journey, a mystical quest, and arrives at this point as a profoundly spiritual inquiry into the mystery of God’s divine love, divinity and omnipotence. Furthermore, Chambers adds nuance to the journey by also making it philosophical and phenomenological, taking up the voice of Merleau-Ponty probing the essence of consciousness by which we are both a part and distanced from the world around us. For the philosopher, this pure centre is also ‘absolute emptiness observable only at the moment when it is filled by experience.’ Merleau-Ponty likens this centre to God. Through the authors Chambers quotes, he affirms that there are higher states of consciousness, and that these states are necessary for the human species to survive and, perhaps, overcome the day-to-day problems that plague the world – pollution, genocide, exploitation of natural resources, overpopulation, famine, disease and war. Inner space needs to be cultivated, and it should be the responsibility of humans to try to achieve at least a state of illumination in order to understand and process the higher aspirations of consciousness. This state of illumination is a form of animism, of magical perception of the world. Chambers calls for a counterbalance of the scientific worldview in the privileging of the magical perception and appreciation of the world – a perception that pays attention to the voices of the stones and plants and the magical essences of all things.

What Chambers advocated was a deep plumbing of the layers of reality to reach a mythic layer where archetypes rest below the level of consciousness. His view was that the universe is animistic, pantheistic, Christian and Jungian all at the same time. He also recognized the magical dimensions of reality, and the potentials of shamanism to provide alternative pathways for unlocking and channeling the profound currents of energy flowing through the entire cosmos. The perception of reality requires a belief in things unseen, graspable partly through contemplation and the practice of occult rituals. The occult, he averred, provided humanity with a vein of untapped resources that could be accessed in order to survive an external reality whose own resources are being depleted. The world of the occult is a reality defined by ‘secret knowledge’; it is a reality we all have the capacity to intuit and know, but choose to keep hidden from ourselves.

‘Many years ago, in London, Ontario, at the invitation of Olga Chambers, I sat at a table in the Chambers living room and examined a curious manuscript assembled by Olga’s husband Jack, an artist I revered, a painter at the height of his powers when he died of leukemia at the age of forty-seven. The manuscript is a collage of quotations drawn from many fields and arranged in chapters, a bold exploration of the conjunction of ‘intelligence, heart and flesh’ in approach to everything in nature and in both the creation and response to a work of art. There was talk of a ‘key’ to all the sources. Apparently it never showed up, so Tom Smart spent a decade ‘decrypting’; the manuscript and figuring out a way of presenting Jack Chambers’s ideas and his vision (in summary, paraphrase, quotation and interpretation), since the manuscript could not be published as assembled. Smart has done a service to the memory and the thought of a magnificent ‘perceptual realist’ in whose paintings the ordinary is brilliantly transfigured.’ Art curator and author, Tom Smart has written many award-winning books and organized numerous exhibitions about Canadian and international art. He has worked in art galleries across Canada and the United States, including the Frick in Pittsburgh, the Beaverbrook Art Gallery, and the McMichael Canadian Art Collection, where he was its executive director.

His monographic exhibitions on east coast Canadian Realists—Alex Colville, Mary and Christopher Pratt, and Tom Forrestall, among others—opened new avenues for understanding this important art movement. While at the McMichael, Tom broadened its exhibition mandate to embrace First Nations art and artists, was instrumental in developing its acclaimed Ivan Eyre Sculpture Garden, and commissioned renowned author Ross King to write a historical portrait of the Group of Seven that was published in 2010 as Defiant Spirits.

Currently, as art curator and supervisor of education at the Peel Art Gallery, Museum and Archives, Tom is working closely with many First Nations artists from Manitoulin Island, among them James Simon Mishibinijima, Ann Beam and Anong Beam, and also with Sikh artists, among them the England-based Singh Twins.

Tom’s many publications with the Porcupine’s Quill treat the relationship between poetry, printmaking and the book arts (Fabulous Peculiarities, a consideration of Tony Calzetta and Leon Rooke’s Fabulous Fictions and Peculiar Practices, which was adapted for the stage), journal writing and painting (Jack Chambers’ Red and Green and Christopher Pratt’s Thoughts on Driving to Venus, adapted by David Ferry as an innovative staged reading at the Writers at Woody Point Festival), and graphic novels and wordless narratives (Palookaville: Seth and the Art of Graphic Autobiography, on the work of comic artist Seth). Tom has written extensively for the Devil’s Artisan on printmaking, the graphic arts and drawing, including on the art of George Walker, Seth and Rosemary Kilbourn.