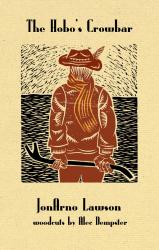 The latest wacky and wonderful collection of children’s poetry, Governor General’s Award winner JonArno Lawson’s The Hobo’s Crowbar presents a world of word botchers and bird watchers, of vile versifiers and vigilante interventionists, of nobodies and somebodies, big guys and small fries. Lawson’s world is one of logic and language, of wit and words, of contradictions and conundrums, but it is also a world in which looking and learning go hand-in-hand, with laughter never far behind.

The book is as fun to see as it is to say, and vibrant woodcuts by artist Alec Dempster are a perfect accompaniment to Lawson’s poems. Together, they help to expose the highs and lows of life, and celebrate goofiness, absurdity and the profound truth of human experience.

Under a Billboard at Bathurst and Eglinton

They passed over the same sidewalks she passed over
But the past can’t be touched, and you can’t touch clouds
And there’s something wrong inside me
and the clouds might solve it . . .

I bought them also because they’re grey without being depressing—
And slow, but not in a way that makes me impatient
Because having nowhere to be or go
Doesn’t stop them from being or going

He Just Happened, She Occurred

She implied, he inferred
She decided, he concurred
He was frightened, she was stirred
She got well, he was cured

She was voice, he was word
He encouraged, she deterred
He was tree, she was bird
She made obvious, he obscured

She objected, he observed
She subjected, he served
He upset, she unnerved
He just happened, she occurred.

Why, at this point, would anyone want to make history? Humans have been making history for 10,000 years—the time has come to make something else.

A bird-watching word butcher is both word botcher and bird watcher.

The problem troubled people most often face is recognizing when there isn’t a problem.

If you’re really beyond it, there’s no reason to behave as if you’re above it.

Now when I look back I wonder why I ever looked back.

If you can’t join them, judge them.

It’s easy to see through people, much harder to look carefully into them. Born in Hamilton, Ontario and raised nearby in Dundas, JonArno Lawson is a four-time winner of the Lion and the Unicorn Award for Excellence in North American Children’s Poetry, for Black Stars in a White Night Sky in 2007, in 2009 for A Voweller’s Bestiary, in 2013 for Down in the Bottom of the Bottom of the Box and again in 2014 for Enjoy It While It Hurts. In 2011 his poetry collection Think Again was short-listed for the Ruth and Sylvia Schwartz Children’s Book Award. Sidewalk Flowers won the Governor General’s Award for Illustrated Children’s Books in 2015. JonArno lives in Toronto with his wife Amy Freedman and his children Sophie, Ashey and Joseph, all of whom assist the author with phrases, topics and sometimes even complete lines for use in his poems. Alec Dempster was born in Mexico City but moved to Toronto as a child. He later moved back to Mexico and settled in Xalapa, Veracruz, where his relief prints eventually became infused with the local tradition of son jarocho music. He has produced six CDs of son jarocho and has presented solo exhibitions of his prints throughout the world. Alec now lives in Toronto.