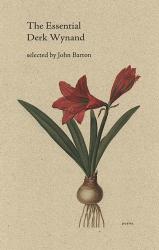 Derk Wynand began to publish a cohesive body of work in the 1970s. Though his poems touch on aspects of daily life both public and private, Wynand is essentially a love poet dedicated to exploring all aspects of his theme: from initial attraction and sustained eroticism, the anxieties and constancies of gradually negotiated connection, the satisfying longueurs of fidelity, to the pleasures of the seemingly timeless domestic moment. A poet of sentiment rather than of sentimentality, he tests the mettle of his vocation in his nimble, unruffled handling of point of view and the poetic line. Whether Wynand sets his poetry in the snows of European folklore, the sunny climes of Portugal and Mexico or the rains of British Columbia, he adroitly maps the inscape of the human heart.

The Essential Poets Series presents the works of Canada’s most celebrated poets in a package that is beautiful, accessible and affordable. The Essential Derk Wynand is the twenty-first volume in the increasingly popular series.

In the great hall of mirrors,
among the cut crystal and the gold
and the angels painted on the ceiling,
you flung out your arms all at once
and began to spin in circles,
in wider and wider circles
across a marble floor where Dom Pedro
had danced with Dona Maria, his future queen,
and I could hardly believe my eyes,
though you danced in every mirror
and on every facet of glass and on each
of the marble tiles on the floor
and in the gold, and the best angel
slowly peeled away from the ceiling
to fly, after long years of waiting
just for that moment (it was before noon
on August 3, 1986) and no matter
how I pinched myself or rubbed my eye,
he did not stop swinging you round
in wider and wider circles,
as I stood by, stupefied, stupid,
only watching helpless, and your feet
slowly rose from the polished marble
and you floated, in a straight line now,
out of the hall with the angel,
toward one of the smaller chambers,
which not even the king’s own servants
had ever been allowed to enter,
toward a room without glass or gold
where, mercifully, I could not watch you.

from One Cook, Once Dreaming

‘The visiting poet’s just kissed me on the ear,’ the cook’s wife tells her husband.

‘Don’t let it go to your head,’ he tells her, aware of the dangerous thoughts to which a barbed poet’s actions can give rise, thoughts she would do better to reserve for her most intimate journal. But then he considers that little harm can be done by a whiskered kiss on the ear, more elusive than a clandestine word uprooted from a poet’s world, a trope high on the pyramid of language, in such a rarefied air that not even a worm could survive there, not even the millipede his wife shuns because it rolls itself into a noxious ball when threatened, because its reproductive organs are located in front. Yes, he understands well these fears of his wife’s, for she has no lock to protect the intimacy of her journal. Not everything makes him jealous.

‘He wants me to sit still for him,’ she says, not thinking about pyramids or millipedes. ‘He wants to capture my essence in approximate dactyls.’

‘Poets have always had ideas,’ the cook tells her, remembering his own adolescence. He balls his hand into a fist to remain in control, nibbles on the nape of her neck in such an artful way that she whispers, for his ears alone: ‘Let’s go home just as quickly as our four legs can take us.’ Derk Wynand was born in Bad Suderode, Germany, in 1944, not quite a week after D-Day. He arrived in Vancouver with his mother and brother in the fall of 1952, half a year after his father had come to Canada to establish a new life for himself and his family. After receiving his BA in English and philosophy from the University of British Columbia in 1966, Wynand taught for the Berlitz School of Languages in Montreal and Drummondville before returning to complete an MA In creative writing at UBC in 1969, where he studied with J. Michael Yates and Michael Bullock. While there, he began to translate the works of H.C. Artmann and others, a practice he continued during his time at the University of Victoria, where he taught from 1969 to 2004, serving two terms as chair of the Department of Writing and working in many capacities for The Malahat Review, including as editor from 1992 to 1998. Soon after he started teaching at UVic, he met his future wife, Eva, who provided the impetus for much of the work that followed, collected in eight books and three chapbooks of poetry, and in an experimental novel. He lives in Victoria, BC. John Barton’s twenty-six books, chapbooks and anthologies include West of Darkness: Emily Carr, a Self-Portrait; Hypothesis; Seminal: The Anthology of Canada’s Gay-Male Poets; For the Boy with the Eyes of the Virgin: Selected Poems; Polari; and We Are Not Avatars: Essays, Memoirs, Manifestos. He is also the editor of The Essential Douglas LePan. During a three-decade career in literary magazine publishing, he served as co-editor of Arc Poetry Magazine and editor of The Malahat Review. Lost Family: A Memoir, his twelfth collection of poems, is forthcoming in the fall of 2020. He lives in Victoria, BC.