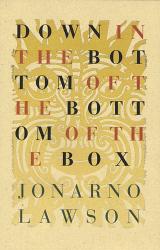 Welcome to the world of JonArno Lawson, where sound rules supreme. It’s a bizarre world, where wolves live on the moon, bears inhabit the sun and bleating lambs get stuck in traffic jams. Here Sleeping Beauty is an insomniac, Little Red Riding Hood is a wolf and Snow White just needed a friend to tell her to be wary of strangers.

In this most recent addition to JonArno Lawson’s rapidly growing opus, the poet takes everything we thought we knew about the world ... and turns it completely on its head. And we couldn’t be more delighted. Best read aloud and with friends, Down in the Bottom of the Bottom of the Box is great for kids who are just beginning to learn the subtle differences between sounds in the English language. Paper cuts by graphic artist Alec Dempster complement Lawson’s poems, giving life to the bizarre world within the book.

The Tree and the Telephone Pole

A tree stood next to a telephone pole and said ‘I’ve just detected; your branches and
your roots are gone, not only that, your bark’s not on! Poor tree, so disrespected!’
The telephone pole reflected: ‘It’s true in a way, you’re very astute, I lack branches,
bark and root, but I’m still held in high repute, because I’m well connected.’

There is an important truth;
that seems both consistent and constant to me:
The truth is that the truth is never
What anybody wants it to be.

‘Lawson’s inspired rhyme and wordplay is deft, clever and funny, taking us from the realms of the Bible and fairy tales through to the scary regions at the very bottom of the bottom of the box. This collection offers amusement, bemusement and the most refreshing of reflections on the self, reason and both imaginary and natural worlds – just what one can expect of this most accomplished poet for the young. Reliably surprising, smart and playful at every turn.’

‘JonArno Lawson is Father Goose! Going to sea with him is a trip of gentleness and humour where we are joyfully one with the lovely flotsam of language and being. I love rubbing elbows with his poems and rhymes, and share his philosophy of delight amid the pratfalls. Oh our lovely human pratfalls, as we ‘‘build an ark for our imaginary selves’’!’

‘Highlighting the punches of Lawson’s surreal wordplays and poems, Alec Dempster’s paper cuts add an archaic and mystic atmosphere that will make you feel happy as you understand the absurdity. The book is an opportunity for everyone who wishes to plunge into the realms of a surreal world full of metamorphic animals and colourful descriptions around the theme of love towards human nature.

‘The way Dempster handles the paper cut is representative of the experience he has gathered as one of the masters of his art. As a graphic artist, surreal poetry has always been his natural environment. Based on his passion for the Mexican fandango music that is full of riddles, he develops an unprecedented quality of work in Down in the Bottom of the Bottom of the Box, where he fuses the Mexican Graphic with music and poetry in a way that brings joy and love to all the people who open its pages.’

‘In this joyfully thoughtful collection, JonArno Lawson takes verbal leaps on the springboard of nonsense, tongue-twisters, nursery rhymes, fairytales, as well as invents creatures such as solar bears and lunar foxes to delight the imagination.’ Born in Hamilton, Ontario and raised nearby in Dundas, JonArno Lawson’s most formative experiences as a child occurred in Florida which he visited for an extended stay at the age of eight. Happy to be missing almost an entire year of school, he filled his days at the beach digging holes and collecting shells and coconuts, travelling in glass-bottomed boats and touring nature parks that featured free-roaming monkeys and parrots. He wore a ship captain’s hat at all times, and a green pouch in which he kept dozens of ticket stubs, a musket ball, brass souvenir coins that bore the faces of various American presidents, and other treasures which he hoards to this day. JonArno is a two-time winner of the Lion and the Unicorn Award for Excellence in North American Children’s Poetry, for Black Stars in a White Night Sky in 2007 and again in 2009 for A Voweller’s Bestiary. In 2011 his poetry collection Think Again was short-listed for the Ruth and Sylvia Schwartz Children’s Book Award. JonArno lives in Toronto with his wife Amy Freedman and his children Sophie, Ashey, and Joseph, all of whom assist the author with phrases, topics, and sometimes even complete lines for use in his poems. Alec Dempster was born in Mexico City in 1971 but moved to Toronto as a child. In 1995 he moved back to Mexico, and settled in Xalapa, Veracruz where his relief prints eventually became infused with the local tradition of son jarocho music. Alec’s conversations with rural musicians, presented along with thirty linoleum portraits, have been published recently as Faces and Voices of Son Jarocho. He has produced six CDs of son jarocho recorded in the field, but is perhaps best known for his two loteria games-El Fandanguito-Lotería de Sones Jarochos and the Loteria Huasteca-which include over a hundred prints. He has had solo exhibitions in the United States, Canada, Mexico, France, and Spain. Alec now lives in Toronto. His own son jarocho group Café Con Pan is currently in production on their second CD Nuevos Caminos a Santiago which will be released in May, 2012 as part of the Lulaworld festival.