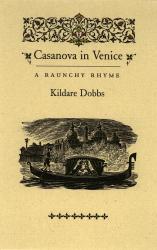 Re-visit the life of history’s most notorious lover, from childhood to Casanova’s daring escape from the State Inquisition’s prison. Using eighteenth-century poetic conventions that Casanova himself would have cherished, Kildare Dobbs infuses this renegade’s legacy with a modern, witty and very hilarious bite. Here is a twenty-first century riposte to Lord Byron’s Don Juan. Casanova in Venice leads the reader on a fast-paced, deliriously raunchy journey in pursuit of that infamous lover and liar, Casanova. The rhythm gallops and the imagery bucks as Casanova grows out of innocence and into the daring, deceitful legend that has since become the subject of fascination, envy and art -- and Kildare Dobbs reveals every tantalizing detail in a meter that begs for recitation.

Or rather, almost every detail. For the narrator of Casanova in Venice has a mind of his own and a decidedly modern agenda in this particular re-telling: from complaints about the excessive sanitation of women today, to opinions on the Big Bang Theory, the lively banter between narrator, audience and Casanova himself turns this mock-heroic epic into an equally thoughtful commentary on modern life.

The narrative frame is based loosely on Casanova’s own Memoires and uses the same classical eighteenth-century poetic conventions that Casanova might have used, and so nymphs, gods, lyres and Muses all make the occasional appearance. Most sections are headed by a translated epigraph quoted from the Memoires and are written entirely in light-hearted rhyming couplets. Accompanied by Wesley Bates’ magical, irreverent illustrations throughout, the result is, finally, a worthy contribution to modern mythology: ‘Arthur, Cu, Scarface, move over, / make room for hero Casanova!’

Praise for Casanova in Venice

How exactly did the world-renowned playboy come to be, and what was it that made him tick? Kildare Dobbs’s most recent poetry collection, Casanova in Venice: A Raunchy Rhyme, provides insight into these questions and more as he takes readers on a very rollicking and sometimes thought-provoking journey through the great lover’s life.

Using Casanova’s own Mémoires as the framework for the nineteen narrative poems in this collection, Dobbs provides readers with a broad understanding of Casanova’s life -- from his early childhood to his later years, when the myth of the man grew to epic proportions. Dobbs presents Casanova’s experiences of abandonment by his promiscuous mother; his adolescent years, when he was surprised by early stirrings of desire; the reversal of fortune, when he saved a senator and became his heir; his arrest and jailing by the Venetian Inquisition; and his later escape. While the collection may be read for the sheer pleasure of the ‘raunchy rhyme,’ Dobbs’s use of Casanova’s history fleshes out the history’s story, lending additional realism to the tales of his earthly enjoyments with countesses, nuns, and everyone in between.

The ‘raunchy rhyme,’ as noted in the title, is the supreme delight of Dobbs’s collection. Throughout the book, readers watch outrageous trysts develop while listening to hilarious double entendre (‘Awake, my lute!’) and surprising, memorable rhymes (‘fondle her’ and ‘gondola’). In ‘Pheromones,’ Dobbs explores Casanova’s powerful chemicals: ‘Two nuns a hundred yards away: / one whiff -- they’re in the family way.’ In ‘Love of Women,’ Dobbs lets readers in on Casanova’s affair with the young, ‘Countess Countless’: ‘He loves her truly for her mind / and really exquisite behind / who to behold evolves a pang, / -- it’s like a beautiful meringue!’ The poet’s use of rhythm and rhyme not only moves the narrative forward, but lends an extra kick of fun to the ribald situations Casanova puts himself in.

Throughout the collection, Dobbs immerses readers in beautiful, spare descriptions of Venice as the backdrop of Casanova’s tale. In ‘Peripeteia,’ he writes: ‘A summer night -- the rising moon / casts sequins on the dark lagoon.’ In ‘Apotheosis,’ readers are given ’gondolas nodding at their tether / like restive horses crowd together.’ On a visual level, the book contains nine beautiful (some titillating) wood engravings by the artist Wesley W. Bates. Additionally, a small line drawing of a different Venetian mask ends each poem, giving the book an extra fanciful touch.

‘The poems are ribald and droll, a cunning linguist in the style of Catullus, Lovelace in Samuel Richardson’s Clarissa or Alexander Pope, wherein an 18th-century man of letters and lovers has illicit assignations, languishes in prison at Leads near the Bridge of Sighs, invokes Scarface and talks of syphilis.’

Casanova is one of the most subversive books of poetry I have read in a long time. Kildare Dobbs is trying to break open the inner life of poetry, teach it sex and sarcasm, teach it roughness and play, so he throws over pretty well everything we believe about fixed forms and free-verse. He brazenly takes up the galloping octosyllabic line that Swift and his age reserved for burlesque. The rhymes are wilfully imperfect and the meters thumping. This is a poem about the dance of transgressions. Its hero, Casanova, argues with God by seducing nuns. Venice locked him up in its high prison, and Dobbs gives him back to us in the moment of his perfect escape.

‘This sequence of poems is a lot of fun: witty, clever, inventive and, like the best light verse, reflective and surprising. Rather than dwelling pruriently on fantasies of the erotic suggested by the received notion of ‘Casanova’, these nineteen poems offer the leisurely companionship of a learned, slightly raffish and generous narrator. He is somewhat self-conscious, but worldly wise and entirely affable. The metrical form, ottava rima, is challenging, and while multisyllabic rhymes are not easy in English, one quickly (‘fondle her ... gondola’) senses the relish in the telling of the tale. Gusto as the expression of intensity brings conviction to the vibrant descriptions of Venice (‘empire of the money bag’). The moonlit city sleeps sublimely. Giacomo is free and exalted. The Memoirs are to be found and read.’

‘Casanova in Venice is a tale told with warmth and wit. The famous lover’s younger years are drawn in verse redolent of Pope, Villon, and Henry Miller, as if the work of a kind of anti-Dante. By turns broad and subtle, this exercise in high drollery is a hugely enjoyable read!’

Giacomo Casanova
Economy in pleasure is not to my taste.

Awake my lute! and trumpets blow
for one who never could say No!
so powerful his virile charm
a wench would catch him by the arm
and pull him down to kiss and fondle her
in the seclusion of a gondola.
This was a man so much traduced --
though less seducer than seduced --
called monster of Venetian lust
for whom good Christians had disgust
Of all his scolds himself the worst
since in old age he’d boast and curse,
accuse himself, though not to blame
for playing Nature’s sweetest game
with naughty females after dinner.
God hates the sin but loves the sinner,
he told himself, so seized the day,
or rather night, and sinned away
and thus assured of heavenly love
delighted in each raunchy move.
The flame of amorous desire
flares briefly like a straw-fed fire
and just as briefly flickers out.
We wonder: What was that about?
Why did we sigh and lose our sleep
and hold our dignity so cheap?
For certain, every nubile dame
rolled in the sack is much the same.
Often our man was set to wed
but freedom was his choice instead:
It’s fine to have a loving wife --
but penile servitude for life?
No way! But more, it would be rash
to keep a woman without cash.
For he too often lacked the ready --

Poet, wait up a moment, steady!
Whom do we speak of? Name the man,
describe his person if you can.

Time has pronounced him lovers’ king,
at board and bed the hottest thing
whose charm no female could resist --
onto her back as soon as kissed!
Con artist first of all the crew,
both con in French and English too.
He would be handsome, said a peer,
were he not ugly, And we hear
smallpox had scarred his cheeks along;
complexion sallow; features strong;
in person very tough and wiry,
in temperament vengeful and fiery.
Called vain -- the accusation’s phony
for what he was, was Macaroni.
He wore such clothes as would assure a
repute for la bella figura;
moreover those who called him vain
had no idea of his brain.
Opulent people almost never
believe a semi-pauper clever.
If you’re so smart, sneers Mistress Bitch,
(through golden teeth) how come not rich?

I have to interrupt once more,
give us the name, I must implore!
Maybe we know him, maybe not,
but please don’t put us on the spot.

Be straight with us and play the game --
all we’re demanding is the name.

His Christian names, if you must know,
were Giacomo Hieronimo,
his last -- I’ve worked the subject over
but can’t find rhymes for Casanova.
except the cockney one displayed --
and I’m not cockney, I’m afraid.
New House, it means, this patronymic,
some joker must have found this gimmick,
as if he said, Heigh ho! my nasty
nature can institute a dynasty. Kildare Dobbs is an award-winning writer and poet who has lived the world over. Born in 1923, in India, Dobbs was raised in Ireland, and educated in Dublin, Cambridge and London. After serving in the Royal Navy during World War II and in East Africa, Dobbs finally migrated to Canada in 1952 and worked in journalism and publishing. His autobiography, Running to Paradise (1962), won a Governor-General’s Award, and since then he has published various collections of short stories, novellas and poetry, including The Great Fur Opera (1970). In 2000, he was invested with the Order of Ontario, and installed as Writer-in-Residence at the University of Toronto in 2002. His memoir, Running the Rapids, was published in 2005. Kildare Dobbs now lives and writes in Toronto.