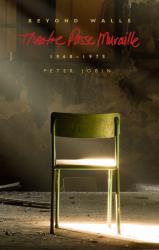 Beyond Walls is an insider’s look at the early development of Theatre Passe Muraille, from its origin as radical and provocative theatre company out of Rochdale College to its evolution into a Toronto cultural institution that has helped to shape Canadians’ perception of homegrown theatre.

A mainstay of Toronto’s theatrical landscape since 1968, Theatre Passe Muraille (which translates to ‘Theatre Without/Beyond Walls’) has focused on breaking down barriers—between actors and spectators, for example—while developing a populist aesthetic that has found resonance with both rural and urban audiences.

In Beyond Walls, Peter Jobin considers the fledgling years of Canada’s longest running alternative theatre in Toronto. It is a roller coaster ride of soaring highs and crushing lows, from sell-out shows and innovative new ideas to morality squad arrests and financial crises. It documents the evolution of the theatre’s focus from its early interest in radical American theatrics to its later, Canadian nationalist direction.

Jobin’s investigation shows that, by embracing diversity, collaboration and inclusivity, Theatre Passe Muraille has become a living and breathing representation of the city of Toronto and has helped to change the way Canadian audiences feel about Theatre. The book includes period photographs by Lionel Douglas and Bob Nasmith, and a foreword by dramaturge David Ferry.

On Wednesday, March 5th, 1969, the day the Theatre Passe Muraille production of Futz was scheduled to open, producer William (Bill) Marshall challenged his city, ‘We want to see what you can put on in Toronto.’ The Toronto Star printed an arousing article, ‘Futz brings nudity, bestiality to Toronto stage’. The Toronto Police showed little interest: ‘If all it’s got to show is a couple of bare mammary glands,’ declared a spokesman, ‘I don’t think we’d even bother with it.’ Marshall’s producing partners, lawyers Miles O’Reilly and Arthur Pennington, invited crown counsel Peter Rickaby to the opening night. Rickaby was both the complainant and prosecutor in the 1965 obscenity conviction of art gallery owner Dorothy Cameron, still a scandal in Toronto. At the Central Library Theatre, a Toronto Police morality squad plainclothes officer asked Rickaby if, in his opinion, obscenity charges should be laid. ‘It would be laughed out of court,’ Rickaby told him.

Hours before the opening, the Futz company stage manager telephoned his actors with a warning that the police might charge them right after the performance. To avoid running into any law officers after the opening, the actors made their exit via the theatre fire escape. On Thursday, March 6, after the second night’s performance, the Toronto Police preferred charges of ‘staging an indecent performance’ and the following day legal summonses were issued to the director, Jim Garrard, the three producers, the actors, the stage crew, and even the Central Library’s teenage coatroom attendant.

As the play’s scheduled three-week run proceeded, new summonses were issued to everyone after each night’s presentation, each performance constituting a new offence under the law. The daily legal ceremony was covered by press and television, a major media event. Publicity put ticket sales through the roof. The producers scheduled additional performances and invited the surprised American playwright, Rochelle Owens, to Toronto for interviews. Her rather ‘Manhattan’ comment was, ‘This couldn’t happen in New York. All this prurient sex. It’s very corny.’ Torontonians who weren’t offended by ‘an indecent performance’, as the warrants read, or by the denial of free speech, were unhappy with the rather provincial character of the entire affair. The Toronto Telegram commented, ‘The press, the police, and those responsible for the production have this much in common: they have all become excited by a trace of smut.’

[Continued in ‘Chapter One, Busted: Theatre Passe Muraille at Rochdale’... ] Peter Jobin is an actor and writer who has participated in Canadian theatre and film for over fifty years. Born in Montreal, he appeared in plays in Canada, the USA and the UK before beginning a career as a screenwriter. He is known for films such as Happy Birthday to Me (1981) and Diamond Cut Diamond (2001). He lives in Toronto. Lionel Douglas was a major force during the glory days of Rochdale. A master raconteur and polymath he could work a room like nobody’s business, and had an amazing vision of that not yet done. He loved photography and Ducati motorcycles. The former you will enjoy in these pages, the latter killed him. Bob Nasmith was, briefly, president of Rochdale and a photographer. Most of his photographic work (both his work as a combat photographer in Vietnam and his later work) did not survive the whips and scorns of time but his association with Theatre Passe Muraille as artist and board member has lasted 48 years. He is quite a good actor.