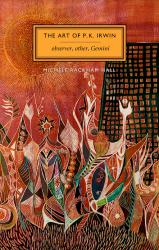 P. K. Page—the celebrated poet—was also a gifted visual artist working under her married name, P. K. Irwin. The Art of P. K. Irwin charts the evolution in her art, detailing an expansive range of artistic influences, from the geographical and temporal, to the poetic, artistic and spiritual.

At an early age, P. K. Page/Irwin displayed an aptitude for illustration, and even her juvenalia indicated a sharp, painterly eye. But it wasn’t until she visited Brazil in the 1950s as wife of the Canadian ambassador, that she began to hone her artistic practice. Under her married name, P. K. Irwin, she produced a wide array of paintings, drawings and other artworks, experimenting with media and styles as she sought to develop her own visual aesthetic, and to reconcile her celebrated poetic identity with her more private, painterly one.

In The Art of P. K. Irwin, Michèle Rackham Hall investigates the artist’s creative development and examines the exotic locales and the wealth of accomplished peers who helped shape Irwin’s artistic output. With rich biographical detail and extensive reference to Irwin’s lyrical life writing, The Art of P. K. Irwin takes readers along on the artist’s journey toward her own aesthetic, one in which "place was her most potent muse, and exile her most fertile state."

If ‘place alters person,’ then it should come as no surprise that there are as many P.K. Irwins as there are places she lived and visited. P.K. Page understood herself as having multiple personas. In her essay ‘A Writer’s Life’, she explains, ‘[t]he fact is, we live not one life but many, and this creature that answers to my name is not single, not simple, but multiple—a crowd’ (4). While much has been written about P.K. Page, the poet, we still know relatively little about this multiplicious ‘creature’ and her alter ego, her ‘other, Gemini,’ P.K. Irwin, the artist. Recent studies, including Djwa’s Governor General’s Award-winning biography of P.K. Page and the volumes of the Collected Works of P.K. Page, have provided a refreshing glimpse of the artist’s life and work. Each of these projects, however, focalizes that view of the artist through the dominant story of the poet. As the old adage goes, ‘there are two sides to every story,’ and this is particularly true when there are two selves at the centre of the tale—at least two selves in the case of P.K. Page/P.K. Irwin. If her self-portrait Tryptich is any indication, Irwin recognized her own selfhood as manifold. This book provides an ‘alternarrative’ of the poet-artist’s career; one centred around the life of the artist, P.K. Irwin. I have attempted to keep the poet’s and artist’s ‘selves’ as distinct as possible by using ‘P.K. Page’ when discussing the writer’s career and ‘P.K. Irwin’ to refer to matters involving the artist and her work. These identities, however, became less and less autonomous as her career went on. The boundaries between artist and poet blurred as her art began to include poetry and her poetry incorporated her art. These border transgressions of the sister arts gave rise to the poet-artist, P.K. Page-Irwin, whose rarely discussed interarts practices will be examined here in detail. I hope to use the artist’s varied names to illuminate the complexity of her career and the intricacy of her work, which clearly benefited aesthetically and thematically from the many ‘lives’ she lived. Michèle Rackham Hall is a writer and professor whose numerous essays, articles, and reviews have appeared in such publications as English Studies in Canada, The Maple Tree Literary Supplement, Matrix, and The Bull Calf, among others. She completed her PhD in English Literature at McGill University on the intersections between poetry and visual art, and she once worked as a docent at the National Gallery of Canada, where she delivered public lectures on Canadian art and led educational programs for the permanent collection. In addition to teaching in the Communications department at Algonquin College in Ottawa, Michèle currently serves as Ed-Tech Development Coordinator at Carleton University.