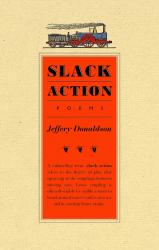 ‘Slack action’ refers to the free movement experienced by the boxcar of a train, when the car coasts free, neither pushed nor pulled. Jeffery Donaldson’s fifth collection, in which single words, images and even poems coast free, suggests that all life is middle life, and that we live in a present moment that coasts between a beginning we can’t remember and an end we can’t predict.

‘Slack action’ describes the movement of boxcars in the midst of a train that brakes and then accelerates, where ‘reciprocal momentums ... meet and intermingle, the forward push / backing into slows, and the slows pulling off / pulling forward ahead of their kickbacks and jostles ...’ – where certain ‘single cars hidden / in the midst, scudding alone, neither pushed / nor pulled, left gentled into hiatus,’ coast free. This is the space of Jeffery Donaldson’s fifth collection: poems of middle life, of Dante’s forest of half-way, their speakers gliding with pent momentum between children who are on their way in and parents who are on their way out. Yet these are also poems that suggest all life is middle life: we live in a present moment that coasts between a beginning we can’t remember and an end we can’t predict. Few things are more difficult to represent in lyric poems, with their calculated incipits and finales; Donaldson has evolved a poetics of the middle, in which single words and images, whole poems, even, coast free ‘an instant in the long line’s accordion folds’ / uneasy breathing.’

Jack in the Box

Always the same old tune, the rote
lessons of form versus content
you keep trying to get a lid on.

Inside, a lurking presence. Outside,
a music to rattle it out by the one
handle, the inner expression sprung

in truth from its own trappings.
Your buried clown gathered to itself,
head lowered, scheming, its revelation

a joke. Maybe it has got too easy
these last years. Just crank up
the old Tourettic jangler, and pop!

out with it! a top-heavy doddering
expression’s gangling hysteria, joyful
as all get out. The very idea!

No wonder you’ve always
looked askance at what’s inside.
But why play then? Did you think

your wound-up loping strains kept
the bounder at bay? Why,
it’s the cranking that stirs him!

Or you just thought it would sound
better, and that you wouldn’t flinch
like this every time around. Jeffery Donaldson is the author of four previous collections of poetry, most recently Guesswork (Goose Lane, 2011). Palilalia (McGill-Queen’s, 2008) was a finalist for the Canadian Author’s Association Award for Poetry. He teaches poetry and American literature at McMaster University.