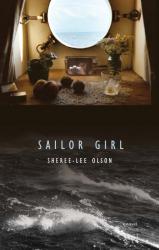 The Great Lakes serve as the setting for a powerful story about the men and women who labour upon them. Sheree-Lee Olson’s protagonist, Kate, belying her contemporary suburban origins and current career as an art student, is equal to the challenge of life aboard the lakers. Her adventures on the lakes culminate in an unanticipated and shocking climax.

Sailor Girl is both coming-of-age tale and love poem to the natural world. Set on the cargo boats of Canada’s Great Lakes in the summer of 1981, it follows the literal and figurative journey of Kate McLeod, a rebellious photography student looking to earn money for school. Using tight, salty dialogue and gripping description, the book renders a sharp-edged portrait of life literally lived on the edges of society.

It is also a love story, in which a middle-class girl finds a deep connection with the unruly young men and toughminded women of the lakes. Life on the water is both brutally physical and socially restrictive, and Kate kicks against the rules, both written and unwritten. A female riff on such classics as Two Years Before the Mast and Malcolm Lowry’s Ultramarine, Sailor Girl is also a uniquely Canadian story, one that distills a vanishing part of our heritage.

‘This book tells the story of a confused college student who spends her summer working on freight liners on the Great Lakes. Kate, our protagonist, has gone to the boats to earn money, but she’s also gone to escape her life: her seemingly too perfect sister, her parents’ disappointment at her desire to become an artist, and an abusive boyfriend. On the boats Kate finds things that trouble her, like the rigid hierarchies, and the rampant sexism. But she also finds a substitute family, a group of people who care for one another in their own way. And Kate also finds danger. The aforementioned abusive boyfriend comes from the crew of her first boat, and Kate ultimately finds herself in more danger than she can possibly imagine. This is a book that tells an engaging story, but even more, this is a book about environment. Olson takes her reader to the lakes and their boats. We feel the storms, the waves, the tedium of the locks, and the residue cargoes leave behind. This is a world I didn’t know existed, and Olson paints a brilliant picture. Kate is a spunky, likable heroine, and she lives in a richly-created world. Olson creates a true sensory experience. The publisher, too, has created a sensory experience, as this is one of the most beautiful books I’ve had the pleasure of reading and holding. The text includes photographs and is printed on thick, textured paper. The inside covers are printed with colour maps of the Great Lakes region. A pleasure to hold and a pleasure to read.’

‘Olson immerses her readers in the lore of the lakes, the hiss of waves, the dark walls of locks and the rough, tumbling life aboard a steamer.’

‘Olson has a deft poetic style that imprints characters and situations with casual grace and potency. Of the angry and inarticulate Boyd, for example, Kate, observing him at work in the belly of the boat, oiling the machinery, says: ‘‘Hell would be like this; hell would be loud. ... Maybe that explained his habitual silence. He had learned to function in a place where words were meaningless.’’ ’

—Ibi Kaslik, The Globe and Mail

‘It’s 1981 in Toronto and 19 year old Kate McLeod leaves the hot garbage stink of Parkdale to work as a porter aboard a Great Lake freighter; a most grueling job consisting of pot scrubbing, potato peeling and airing out the laundry of unkempt sailors. A summer job to pay for art school becomes an adventure and exploration into the rough landscapes of wild waters, tumultuous relationships and the current of life amongst hard lived seamen. Though not a typical place for a girl with soft skin and perky bosom, Kate toils away and meets the steel tough surroundings with tenacious force, both fueled and soothed by the lens of her camera, her youthful sexual desires and laced in cigarette smoke and vodka. She learns the value of a hard day’s work and is introduced to gritty folk who opt for cod jigging, as opposed to drooling over Princess Diana. Pulling into desolate forgotten port towns lined with sleazy strip bars and primal men, Kate evolves from an apathetic pajama clad drifter into a young woman with the kind of strength that can split the waves and whose character deepens and rocks with a new found life that proves much more raw and honest then the girl she left on land.’

‘As though she were displaying a trophy fish, Olson captures the triumph and pain that come with being a woman who follows her own path.’

‘What drives a nineteen-year-old girl to find herself on a harsh ship?

Sailor Girl is Kate McLeod’s story of her time on a Great Lakes Grain boat. She is trying to get over a harsh relationship with a boyfriend who treated her as if she was sub human, and she finds comfort in the brutal labor that comes with being a sailor. A tale of growing up done in an unusual and unique way, Sailor Girl is highly recommended for its sweet blend of elements and original presentation.’

‘It’s 1981 in Toronto and 19 year old Kate McLeod leaves the hot garbage stink of Parkdale to work as a porter aboard a Great Lake freighter; a most grueling job consisting of pot scrubbing, potato peeling and airing out the laundry of unkempt sailors. A summer job to pay for art school becomes an adventure and exploration into the rough landscapes of wild waters, tumultuous relationships and the current of life amongst hard lived seamen. Kate evolves from an apathetic pajama clad drifter into a young woman with the kind of strength that can split the waves.’

‘It’s gritty, at times shocking but never boring. Sailor Girl, written by Sheree-Lee Olson and published by The Porcupine’s Quill, is everything that a first-time novel should be.

‘It’s not a book for the faint-of-heart. Kate, the main character, is a photography student who is financing her education by working as a cook on the ships sailing the Great Lakes.

‘She’s also running away from several life situations, including a violent boyfriend. Of course, her escapades aboard the Lakes boats are anything but peaceful. She may be running away from her old life, but she ends up running into more dangerous situations in her new realm.’

‘One of the book’s greatest strengths is its honest evocation of a teenage girl’s sexuality during the early 1980s, when ‘‘Lady Diana’s face was on every [magazine] cover: the new patron saint of virgin brides.’’ Whereas Lady Di’s story makes her sister ‘‘giddy,’’ it makes Kate, far from a virgin herself, ‘‘want to spit.’’ Olson explores the full complexities of female desire, from the disturbing connection Kate makes between sex and violence, to Kate’s later revelation that ‘‘Pleasure is seditious. A boy with an artful tongue can upset the social order.’’ ’

‘Although the characters in the book are wonderfully crafted, it’s the poetic description of Kate’s environment that makes this novel sing.’

‘This engrossing coming of age story has real literary merit, though frankly described sexuality has it straddling the line between a general adult audience and perhaps the most mature of young adult readers. Sailor Girl balances between salty action with lyrical perception, as when Kate meets the antagonist: ‘...he came toward her along the companionway, wearing a white tee, light from the portholes strobing across his cheekbones. She would always remember the first sight of him, like a strip of negatives, dark and light, dark and light.’

‘Olson understands the appeal of tough sex and wide open water. She’s got a great ear, too. Here is a book about a girl rebel written in prose that cuts to the quick.’

‘A powerful debut that depicts the commotion and raw intensity of youth, and -- without ever romanticizing -- captures the romance of the sweetwater seas, those ‘‘Great Lakes like giant footprints climbing to the centre of the continent’’. Hardly a page passes without a fresh image or metaphor, a striking phrase or insight -- and insight above all, because this is an honest novel. And one to savour.’

‘I’d go anywhere with Kate McLeod, the raunchy and reckless protagonist of Sheree-Lee Olson’s Sailor Girl. Finally a Canlit heroine who shows us that girls can drink like fish, work like dogs, swear like sailors and still be good to the bone. Once you have clanked beer mugs with Kate, I guarantee you will take her to bed and not put her down till dawn.’ Sheree-Lee Olson was born in Picton, Ontario, a town on the shores of Lake Ontario. She has three university degrees, in fine arts, philosophy and journalism, financed largely by working on Great Lakes freighters. In 1985, she joined The Globe and Mail as an editor, and in 2007-08 she was a Canadian Journalism Fellow at Massey College, University of Toronto.