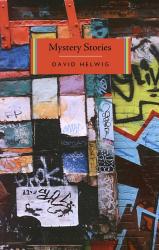 Mystery Stories is inhabited by absence: dead friends, past childhoods and ex-lovers. Others, stunned, are left behind to navigate the pitfalls of memory, while trying to make sense of lives built by people who are no longer there. This collection is an intricate addition to Helwig’s already large canon of rich, thoughtful stories populated by densely real people.

Mystery Stories is inhabited by absence: dead friends, past childhoods and ex-lovers. Others, stunned, are left behind to navigate the pitfalls of memory, while trying to make sense of lives built by people no longer there.

There is the young neighbour of Reuben Sachs, an artist, who shot himself only weeks after painting an image of a hanged man. There is Reverend Graham Lund who wonders about his family’s future after visiting the deathbed of a hundred-years-old woman, a woman who used to be a brazen war reporter. A man, blinded by war, revisits the beauty of Venice in his dreams, and a snowbound criminal named Wicker cares for an old pony and a three-legged dog while remembering his childhood. Men and women, faithful and unfaithful, think on the past in their creep towards mortality.

Each of these stories is a case study in loss and recovery, and Helwig remembers these fictional characters with a reverence and detail ordinarily reserved for family. The stories and the times change, but the mystery explored in each remains the same: What is this life that I have lived, and where have those people gone? Mystery Stories is an intricate addition to Helwig’s already large canon of rich, thoughtful stories populated by densely real people.

‘Divided into four sections, the collection shies away from the traditional Canadian short-story genre in both space and time. Stories often switch between past and present, and vary in length from 10 to 60 pages. To Helwig’s credit, the bulk of the stories are technically polished. Most of the stories are also told from a third-person perspective and involve older, divorcee protagonists struggling to piece together parts of their past. Understandably, themes of memory and desire dominate this book. Equally interesting is the fact that Helwig doesn’t shy away from creating female protagonists -- which he does to some success, particularly in Stitches in Air.’

‘These are not mystery stories in the whodunit sense. What Helwig explores is the mystery of people’s everyday lives -- how speculation about the past haunts us, and whether we can ever know what another person is really like.’

‘ ‘‘It is a human weakness, remembering,’’ says the narrator of ‘Stitches in Air,’ one of twelve tales in David Helwig’s collection, all of which revolve around the issue of memory. Every character suffers a loss that leaves wounds -- deep cuts that heal poorly, if at all -- and as they struggle to come to grips with how to go on, they must also wrestle with their ghosts, delving into the past to learn what shapes the present, what fates they have managed to escape, and what lessons they can never forget.

‘Helwig was born in 1938 and has written and published numerous pieces of fiction, nonfiction, and poetry since his undergraduate years. A former teacher, he also founded the annual Best Canadian Stories, and his work speaks to the breadth of his knowledge, both of literature and of the human condition. From the man who gets constant phone calls for a doctor he does not know, to the girl who photographs herself in disguises and posts them on her website, the characters in these stories probe the depths of mankind’s loneliness, how much (and sometimes how little) one does in an attempt to lessen the ache.’