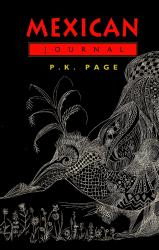 In Mexican Journal, P. K. Page recounts her experiences as wife to the Canadian ambassador to Mexico in the early 1960s. Raw, bluntly honest and at times painfully intense, the journal entries expose Page’s attempts to overcome troubling phobias and spiritual barrenness. Over time, she discovers colour amid the darkness, immersing herself in Mexican culture, surrealism, and, most importantly, the mystical teachings of Sufism, which would inform her spiritual life for the rest of her career. "Black, black, black is the colour of a Mexican night."

From its first memorable lines, Mexican Journal hints at the shadows that plagued the mind and spirit of P. K. Page during her tenure as wife to the Canadian ambassador to Mexico in the early 1960s.

In journal entries spanning the period of March 1960 to January 1964, Page attempts to compartmentalize her various selves as wife of a diplomat, tourist, silenced poet, visual artist and religious novice. Her entries acknowledge troubling phobias and spiritual barrenness, as well as her painful acceptance of the blackness of the Mexican night. They document Page’s study of surrealism and the country’s ‘dark gods,’ and reveal her struggle to overcome her personal dark night of the soul through the mystical teachings of Sufism, which would inform her spiritual life for the rest of her career.

Unpublished during Page’s lifetime, Mexican Journal acts as a companion, or more accurately a counterpoint, to the wondrous and sensual Brazilian Journal. Raw in its emotion and bluntly honest in its confessional style, it exposes shadows and undersides in its painfully intense but richly productive analysis of a self that reluctantly faces internal and external darkness.

Mexican Journal is third in series of volumes to be published over the next ten years as a complement to a proposed online hypermedia edition of the Collected Works of P.K. Page. The online edition is intended for scholarly research, while this first published print edition offers an artful text intended to be enjoyed by those few who cherish and wonder at the talent of one of Canada’s greatest poets.

Black, black, black is the colour of a Mexican night. And my first impressions of blackness and carnations and small brightly dressed Indians – mother, father and all the little papooses trailing the wide tree-lined boulevards of a European city – will remain I am sure, stronger and sharper than later ones.

We had a good flight, non-stop from Toronto. Marred only by the pretentious absurdity of the CPA meal. It was five courses dragged out over hours. Designed to please Canadian tourists I trust rather than a preview of what Mexicans expect. At the airport the assembled Embassy representatives, the Chef de Protocol from Mexican External and the German Ambassador and family whom we knew in Canberra. It was nice to see familiar faces.

The hotel where we are staying on and off is very modern, very Hollywood and to my taste utterly depressing. Very dark and stagey with water falling and large plants growing in the dark. It looks out, or our room does, over the roof-tops of this low city. Our impression coming in from the air was that the city was grey. And compared with Brazil with its red tile roofs, it is. From our hotel we see onto the roofs of an immense area of houses – flat roofs, cement, bulbous here and there in a rather anatomical way with cement water storage tanks. Our first black Mexican night was splintered by the melancholy two-note whistle of the police communicating with each other, and little chunks broken out of it towards dawn by a turkey kept on a nearby roof among the laundry.

We took a look at the Residence that first day. It is a fifteen-minute drive from the centre of town along a fine Paris boulevard, Paseo de la Reforma It is very lovely, a wide boulevard down the centre along which the finest collection of Don Quixotes ride on a Sunday – large sombreros, the tilt of the brim conforming to the personality – dour, cheerful etc., wide little armless jackets which give their torsos great breadth and then below the most beautiful pants imaginable – with wide strips embroidered or tooled running from waist to ankle. The Reforma has four rows of trees so that coming or going you drive down a tunnel of green – young and delicate now, because it is Spring. Seasons here are confusing. It is spring but it is the hottest season of the year. That means hot outside at midday and cooling rapidly towards evening when it is cold. The mornings are hazy, a thick smog shuts out the surrounding mountains. As it clears in the afternoon you see the horizon with its volcanic mountains with their sinister looking tops which remind me of sawed off shotguns.

We are told that on a clear day you can see Popacatapétl – El Popo as he is called by the natives – which makes him sound to me like a rather more masculine Pope.

Down the Reforma too, on a Sunday, with all the populace out, are the balloon men suspended from great clouds of balloons of the most elaborate variety – balloons most strangely painted or nippled or tufted – unlike any balloon I have ever seen. And the Indians – in sombreros too, the women with pigtails, moving along this lovely avenue.

The Indians here are very impressive. No wonder Lawrence was fascinated by their skin colours. Our driver – Guillermo, who has driven for Canadians since there was an Embassy – is small, immensely dignified, serious, Lawrence’s ‘obsidian’ eyes, long-faced, and with skin – peach-like in quality but as if when peeled it would disclose a blood orange. The two servants in the house – brother and sister – Erasmo and Engracia – are less rosy orange. He has not the obsidian eyes of Guillermo, but his eyes are watching and full of wonder. I am impressed by them all. They are helpful, quiet, patient and very hard working. I may be quite wrong but I get the impression they are full of good will. This is a strange reaction because these are a strange people, I know, descendants of a people who made human sacrifices, practised ritual cannibalism and who may, for all of me, do so still. The name Quetzalcoatl is spoken often enough, goodness knows.

The house is a headache. It has not had a woman in it for a long time and shows it. Also we’re in the throws of a minor redecoration for the Prime Minister. The Government is loath to spend money, so the minimum is being done. A great mistake in my opinion. The house in itself is hideous. On top of that it is in bad need of repair, colour and everything else. But we can spend little. The Canadian decorator who is here is a nice enough boy but with the very worst qualities of Canadians. He is afraid of anything distinguished, has a deep reverence for the ordinary and on top of that thinks in terms of furnishing as filling a room with furniture – not necessarily furniture which serves a necessary function. However, we shall do the best we can. As the climate here is dry we can – personally, I mean – buy furniture if and when we see it, as well as rugs and pottery etc. and make the place nicer. In Brazil we didn’t dare for fear of it all cracking in Canada.

I feel I have a little tribe of Indians living in my house. Another little tribe is busy painting it – its chief is a brother of Diego Rivera, I am sure! A wonderful little man who fills me with great pleasure. The meeting between him and Arthur so full of dignity and feeling it nearly broke my heart.

One cannot help comparing this with Brazil. It is nothing like as beautiful at first glance. Perhaps time will make it more so.

It has not the sea to begin with; also, because it is dry it has not the lushness of a tropical city. Many of the trees are gums. The architecture does not compare with Brazilian. Large buildings here are just large buildings – immense in conception but architecturally disappointing. University City which we drove to see yesterday is impressive by its size, by the number of murals, by its situation, and by its library – a cube elongated vertically with its four sides completely covered by mosaics of Mexican stone – the colours running through the earth colours to white, grey and grey-blue. The whole scope of the university is fabulous – immense swimming pools, football arenas, jai alai courts – but somehow everything is lacking in creative imagination. Nearby on what was once a vast lava field is a new real estate development called Pedregal which is one of the most fascinating and strange places I have ever seen. Many of the houses and the high walls which surround them are made from stones of lava put together with cement – often pink or blue or green, so you get this queen brown black held together with soft delicate dirty pastels. Sometimes the lava stones are painted these dirty colours to blend with the landscape – a sear dried-out wonderful world of grasses and plants with pods or tangled briars – all no-colour, greybrownblack and in their midst a small bush, stubby-fingered, each finger tip bursting into a head of brilliant yellow – and the weird colorin trees, their trunks like stylized human forms in strange positions and a burst of thin branches above on which perch bright artery-red flowers like birds. All the houses in Pedregal are low – almost subterranean in feeling and surrounded by walls. It is as if it is a submerged ruin of a city, but all ultra-modern, and hermetic hermetic. Little ponds hollowed from the lava float ducks purely for decoration. I can hardly wait to get at it with camera and pen. Rich man’s rubble.

The old city – the Spanish city is equally walled – more walled. You can see nothing of the houses behind. It is all so very secret.

Today we lunched at the German Embassy a most beautiful house and it was enjoyable. I saw some of the marvellous gunmetal pottery made here, the incredible copper pots, old blonde wood chests, woollen carpets, and Indian saints. I can hardly wait to move into Mexico and out of the tourist areas which we have largely inhabited since arriving.