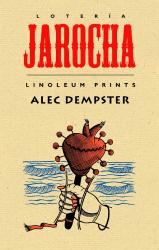 Lotería Jarocha assembles a series of linoleum-block prints created by Mexican-Canadian artist Alec Dempster after his return to his native Mexico in the mid-1990s. Discovering a lively genre of folk music from the Veracruz region, Dempster subsequently devoted himself to documenting his heritage with printmaking. The result is Lotería Jarocha, a collection of expressive images which catalogue Dempster’s encounter with the vibrant son jarocho culture of his birthplace. In the mid-1990s, artist and musician Alec Dempster returned to Mexico, the place of his birth, and discovered son jarocho. A genre of folk music from the Veracruz region of Mexico, son jarocho originated in the 17th century with the confluence of Indigenous, African and European peoples. In Veracruz today, musicians can still be heard singing these traditionalsones, passed down orally through the generations as themes or tropes, rather than songs with set lyrics. As Dempster immersed himself in the tradition, speaking and playing with rural musicians, his exploration of the culture resulted in a series of linoleum prints, each depicting a traditional son. Dempster’s imagery, playful and enigmatic, provides a window into a culture virtually unknown outside Mexico. In this stunning collection, Dempster lends his own voice to the prints for the first time, illustrating their genesis and origin in clear, unassuming prose. With Dempster as guide, Lotería Jarocha draws its reader into an infectious culture of music, laughter and dance.

The rain in Santiago Tuxtla has two flavours: the torrid din of a summer downpour and the penetrating cold of a slow winter drizzle, called aguanieve. In December, damp weather often muffles the sound of nocturnal processions along streets and down alleyways when musicians gather, moving in multiple directions, each with a chorus of followers. Time and place are blurred by the mist and steady rain saturated with the collective incantation of a familiar refrain: ‘Oranges and limes, limes and lemons. The Virgin is more beautiful than all the flowers.’ The tranquility, however, is sometimes interrupted by northerly winds which invade the night with violent gusts, shattering windowpanes and rattling tin roofs. Many of the verses associated with this son mention tears, rain and the sea. Longing and departure are also common themes. Perhaps El Aguanieve originated along the coast as a lament for sailors out at sea, with other lyrics attaching themselves to it on its journey inland to places like Santiago Tuxtla where this son has been played for many generations.

In 1958 Richie Valens rebranded the most emblematic of sones jarochos, in a rock and roll setting. He took his cue from early versions of La Bamba sung by musicians from Veracruz who had found a place in Mexico City’s burgeoning film industry and night club scene. Verses associated with La Bamba indicate that it may have originated in the Port of Veracruz during the seventeenth century when the population lived in fear of attacks by ‘Lorencillo’, a dreaded Dutch pirate. I first heard a more traditional interpretation of La Bamba in 1995 on a tape of field recordings made in Los Tuxtlas. A year later I heard a similar version after stumbling off a bus in Santiago Tuxtla. I had walked just a few blocks under the searing July sun when I came across a group of old musicians huddled together playing La Bamba under the protective shade of a storefront awning. They were from different communities taking part in the annual celebrations of the town’s patron saint. After attending a few fandangos I realized that La Bamba is still very much at the heart of the traditional son jarocho repertoire.

Six short notes are enough to announce the arrival of El Zaptateado with a cavalcade of nails quickly following suit across rows of expectant strings. Two brazen chords are unleashed and begin to sway back and forth like a pendulum, creating the thick sound emanating from the fandango. Meanwhile, the guitarra de son weaves an endless string of melodic variations within the harmonic tug of war. Dancing couples take turns facing each other on the tarima to engage in the rhythmic dialogue. Singers jump into the fray with a piercing cry of ‘Ayyyyy!’ as a signal for the dancers to quieten their steps. In spite of the sudden lull each verse must be forcefully sung over the rumble of hard soled shoes, boots, and the cumulative drone of strings and staccato melodies. Throughout the son disparate voices ring out from all around the tarima, drawing from an old well of memorized poetry. The dancers wait impatiently on the sidelines for the end of each verse. Only then is there an opportunity for a change of partners, indicated by a gentle tap on the back.

‘In these animated linocut prints, Alec Dempster has given us vibrant, expressive visualized lyrics for songs known as sones jarochos that bring communities together to sing, dance, play games of chance – lotería – tell stories, and connect to a past that goes back centuries.’

‘Se necesita un poco de gracia: you need some wit and grace to dance the most famous Jarocho song La Bamba and to understand it. Likewise the Lotería Jarocho graphics by Mexican/Canadian artist Alec Dempster are a witty combination of graceful and meaningful love declarations towards the Veracruzanian music and Mexican graphic art. At the same time illustrating the hidden meaning of the songs lyrics, the graphics refer to the very popular Mexican game of lotería, where instead of numbers as in the comparable Bingo game, words and names are to be collected on the board until a winner filled his board first.

‘The song titles and the verses illustrated by Alec Dempster in a magical and at the same time realistic manner solve the funny puzzles of many of the complex rimes. Love and attraction, longing and departing are the moving forces of any dance. You must let go preexisting ideas and be ready for the surprise of the unexpected hidden meanings to understand the dominating force of this music, which lives within a joyful world of mutual love between the dancing couples.’

‘Alec Dempster has created una maravilla of text and image celebrating the musical culture of Mexico’s Vera Cruz region. With roots in the 19th century graphic art of Manilla and Posada, filtered through the reclamation of tradition of the revolutionary school of the twenties and the Taller de la Gráfica Popular artists that followed them, he has created a series of images that reflect both tradition and modernity. The texts combine anthropology, folklore, contemporary popular history and Alec’s own history and memory as a Mexican-Canadian. The combination is as fresh as a gulf morning breeze. All that’s missing is the music and Alec has made a CD of some of these songs – a CD that is well worth tracking down to listen to while you peruse this fine work. This is a great project that will delight both the reader with a casual interest in popular culture and the serious aficionado of Mexican music.’

‘Tradition is not static; it is something on which to build, to imagine, to create something new. In Lotería Jarocha, Alec Dempster embraces his passion for the son jarocho musical tradition of Veracruz, Mexico, and applies his printmaking artistic alchemy to create a fanciful collection of sixty annotated linocut images. Against the conceptual backdrop of the popular Mexican game lotería – a kind of bingo that combines proverbs with images of everyday Mexican life – Dempster transforms each piece of music into a visual riff on the piece’s theme. Music, game, art form and personal muse all resonate to produce a fresh and playful interpretation of folk tradition.’ Alec Dempster was born in Mexico City in 1971 but moved to Toronto as a child. In 1995 he moved back to Mexico and settled in Xalapa, Veracruz, where his relief prints eventually became infused with the local tradition of son jarocho music. Alec’s conversations with rural musicians, presented along with thirty linoleum portraits, have been published recently as Faces and Voices of Son Jarocho. He has produced six CDs of son jarocho recorded in the field but is perhaps best known for his two lotería games – El Fandanguito, Lotería de Sones Jarochos, and the Lotería Huasteca – which include over a hundred prints. He has had solo exhibitions in the United States, Canada, Mexico, France and Spain. Alec now lives in Toronto. His own son jarocho group, Café Con Pan, has recorded two CDs, the most recent being Nuevos Caminos a Santiago. They are currently the recipients of a Popular Music grant from the Ontario Arts Council.