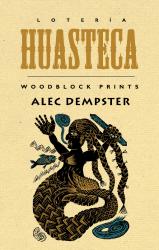 Home to an ethnically and linguistically diverse population, the Huasteca region of Eastern Mexico defies geographic and political boundaries and is instead known for its kaleidoscope of indigenous cultures rich in traditional art, music and dance.

In Lotería Huasteca, author, visual artist and musician Alec Dempster illustrates the traditions and music of the Huasteca region with a series of woodblock prints and accompanying explanatory texts that capture the style and history of the region and its people. Organized in the form of the popular household game of lotería, Dempster’s words and images provide a fascinating mix of cultural reference, music history and artwork, which together form an educational game that imparts a tantalizing taste of the vibrant and diverse world of the Huasteca.

My first foray into the Huasteca region began with an overnight bus journey from Xalapa, the capital of the state of Veracruz. Sleep was difficult due to stops in small towns along the way, and when the bus came to my final destination in Naranjos it was still dark. I dragged my feet and belongings to a place by the curb, beside a tower of freshly made rounds of white cheese placed carefully between moist banana leaves. Eventually, a pickup truck parked in front of the terminal and the driver was greeted enthusiastically by a group of fellow travellers who had assembled around me. It turned out that we were all headed for the same music festival in ’Citla’, an hour’s drive up into the hills. Most of us clambered into the back, and from there we were privy to a majestic sunrise over the rolling hills of the Otontepec mountain range. I had no idea I was setting out on a journey that would eventually result in a book, nine years later.

At the time I was familiar with son huasteco music, having listened to the legendary Trio Xoxocapa at La Sopa restaurant in Xalapa on many a Friday evening. My understanding of the huasteca region was facilitated by Arturo Castillo Tristán (a retired elementary school teacher, poet and cultural promoter) from whom I received a surprise phone call in 2004.

Arturo began by explaining that he was calling from Citlaltepec, and that he admired the artwork and recordings I had done related to the culture of southern Veracruz. He invited me to attend the upcoming son huasteco festival he was organizing, and enticed me with a place to stay and food to eat, as well as a space to exhibit my prints. This was an offer I could not refuse. A few weeks later I was in Citlaltepec, where I quickly grasped Arturo’s real motive, which was for me to become enamoured of the region, its people and its music.

Arturo, who was familiar with my lotería jarocha game, was eager for us to work together in the creation of a lotería huasteca based on the huasteco musical repertoire. Lotería is a game of chance similar to bingo. With origins in Italy and Spain, it has been played in Mexico since the seventeenth century by people from all walks of life. Whether sitting around the kitchen table or in a church courtyard, the players participate expectantly with their printed boards, observing the grid of colourful images as names are called from a deck of cards. To this day its popularity hasn’t waned; the game can be purchased at market stalls or stationery shops all over Mexico. A few pesos may be pooled at the start of each round, increasing the thrill of a possible win. The prizes may be even more enticing when lotería sessions are held to raise funds for initiatives such as refurbishing a church.

The illustrated cards are pulled from the deck by a caller who recites phrases alluding to a standard series of 54 images that include the frog, the ladder, the moon, the deer, the soldier and the sun. There are stock phrases such as "The blanket of the poor ... the sun!" or the caller can improvise something. For the lotería huasteca I illustrated 54 new themes relevant to the huasteca region printed with corresponding quatrains by Arturo Castillo Tristán.

Initially I hesitated to embark on the project since the culture of northern Veracruz and the rest of the Huasteca was foreign to me, unlike son jarocho, the folk music from southern Veracruz, which had become second nature after prolonged immersion, marriage and an inexplicable affinity for the music. The thought of the months it would take to create a completely new series of fifty-four prints for another lotería was also a consideration. Nonetheless, the ebullient weekend in Citlaltepec that followed was all it took for me to commit to the project. I succumbed to the percussive throb of collective dancing, the nimble fantasia of countless violinists, impromptu poetic duels between singers, an eye-opening stroll through a huastecan market and my first taste of zacahuil(an enormous tamale usually reserved for special occasions).

Back in Xalapa, I began in earnest by compiling a list of the traditional songs, called sones huastecos, that I thought might illustrate the new lotería, only to discover that several had the same titles as the sones jarochos constituting my lotería jarocha. To distinguish the two games we decided to focus on the region’s cultural diversity rather than limit the project to son huasteco, which is only one of the many components that define the Huasteca. With the help of huasteco scholars Román Güemes Jiménez and Nelly Iveth del Ángel Flores, I assembled a long list of potential subjects for the prints, which was whittled down to the fifty-four illustrations included in this book. Alec Dempster was born in Mexico City in 1971 but moved to Toronto as a child. In 1995 he moved back to Mexico and settled in Xalapa, Veracruz, where his relief prints eventually became infused with the local tradition of son jarocho music. Alec’s conversations with rural musicians, presented along with thirty linoleum-block portraits, have been published recently as Faces and Voices of Son Jarocho. He has produced six CDs of son jarocho recorded in the field but is perhaps best known for his two lotería games—Lotería Jarocha, and Lotería Huasteca—which include over a hundred prints. He has had solo exhibitions in the United States, Canada, Mexico, France and Spain. Alec now lives in Toronto. His own son jarocho group, Café Con Pan, has recorded two CDs, the most recent being Nuevos Caminos a Santiago.