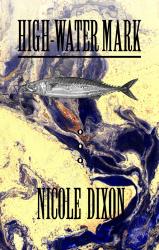 Ten varied stories – many published in Canada’s best literary journals – of contemporary women learning what they want from sex, love and partnership make up the debut collection from Bronwen Wallace Award–winner Nicole Dixon.

High-Water Mark is Bronwen Wallace Award–winner Nicole Dixon’s smart and sexy debut. These ten tightly written stories, touched with humour, focus on characters pursuing romantic and professional desires, and encountering and recovering from betrayal and heartbreak. A young woman and her partner discover that both going back to the land and raising a newborn are more difficult – and fraught with more unexpected dangers – than life in the city. A woman becomes sexually obsessed with a female friend after a six-year relationship ends. The east/west Toronto divide is just one conflict that arises among the three members of an all-female band. As the women in High-Water Mark run away and return, try love and sex, move from city to country, they are always challenged and changed. Dixon’s perceptive, witty, no-nonsense collection authentically captures the voices of women in a way rarely found in mainstream fiction.

Dixon’s prize-winning stories are influenced by Alice Munro and Lorrie Moore. They’ve been nominated for the Journey Prize, short-listed for a CBC Literary award and published in Grain, The Fiddlehead and The New Quarterly.

‘[They] have humour and sadness.’

‘The women in Dixon’s stories speak in frank and unapologetic ways about conflicts in their lives.... In High-Water Mark, Dixon’s women continuously question the options they are presented with, in work, relationships, sex.’

‘This complex story is told by fully individuated characters who speak clearly in their own voices. The vivid sense of place arises from the events, the dialogue, and the careful selection and succinct treatment of telling details. The author’s command of her craft inspires the reader’s confidence: we are in good hands; we will be led to a new place, a new insight into the human condition.’

‘And I loved Nicole Dixon’s ‘‘High-Water Mark’’ for how the smart-ass narrator single-handedly saves the story from melodrama with the power of her voice. Cancer, dead dads and dead babies — and I laughed? That’s some feat.’

—Caroline Adderson, author of The Sky is Falling and Bad Imaginings Nicole Dixon has lived in Toronto, Sarnia, Windsor, North Bay and Halifax. Her work has been nominated for the Journey Prize and a CBC Literary Award and appeared in The New Quarterly, Grain, The Fiddlehead and Canadian Notes and Queries. In 2005 she won the Writers’ Trust of Canada RBC Bronwen Wallace Award for short fiction. Currently electronic resources librarian at Cape Breton University, Nicole divides her time between New Waterford, Cape Breton, and Advocate Harbour, Nova Scotia.