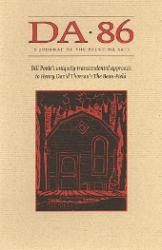 This issue includes Gordon Sisler's comparison of an early, and a late, edition of Henry David Thoreau's essay The Bean-Field as designed and printed by the late Bill Poole at the sign of the Umber Chicken (aka Poole Hall Press, Grimsby). Transcendentalism as applied to small-scale animal husbandry on the Niagara Escarpment. Librarian John Shoesmith interviews Rollin Milroy of Heavenly Monkey (Vancouver) and learns something of the influence of the various private presses Rollin most admires. Stephen Sword travels the country in pursuit of cylinder presses on display in Canadian museums and weighs the relative mechanics of Cranstons, Campbells and Whitlocks. And Greyweathers's Larry Thompson introduces the newly minted MacOdrum Library Book Arts Lab at Carleton University,

Also in this issue is the Rogues’ Gallery, featuring a profile of Deborah Barnett, and Richard Kegler’s discussion of Goudy Cloister Initials.

The front cover image is after an engraving by Brian Johnston that depicts Bill Poole's shop on the Escarpment above Grimsby. The keepsake presents a leaf from Francesca Lohmann's An Alphabetical Accumulation published by Heavenly Monkey, 2017. 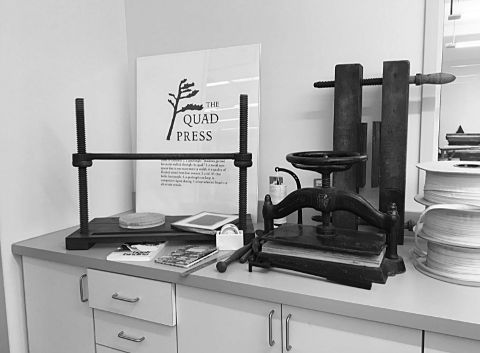