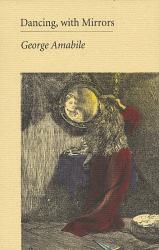 Dancing, with Mirrors is George Amabile’s ‘lyrical retrospective’, a thoughtful fragmentation and re-arrangement of his personal history. These eleven ‘cantos’ tumble into and over each other in a rush of passion, memory, devastation, and quiet moments that promise renewal; here, Amabile’s talent for sounding the complex depths of everyday life shines like a beacon.

More than twenty years in the making, Dancing, With Mirrors is the result of George Amabile’s patient examination of his life. The light of careful attention, shining into his past, sends fragments of memory ricocheting into sensuous poems that arrange themselves, as if by magnetic attraction, into eleven remarkable cantos, each with a different focus, rhythm and texture. In this ‘lyrical retrospective’, decades are distilled into scattered moments: flashes of pain, sparks of affection, the smart of disappointment, small graces of the everyday.

Organized thematically into a roughly chronological narrative, these lyrical fragments make up George Amabile’s most intelligent and moving collection to date. Intense snapshots of life-defining moments, from his brother’s death to his relationship with a younger woman, are rendered with vivid immediacy, but also with a resonating aura that elicits questions which may never be answered by experience alone. These poems offer hard-won wisdom alongside a fierce commitment to life itself, capturing one man’s journey in exquisite imagery, an impressive variety of forms and a voice that is recognizably authentic in all its registers.

Since 1972 George Amabile has written seven collections of poetry and has been published in over one hundred magazines around the globe, including The New Yorker, Harper’s, and Saturday Night. Over the years George Amabile has come to be recognized as one of Canada’s most accomplished and masterful poets.

Praise for Dancing, with Mirrors

‘Poetry can be an intimate affair, if the poet is willing to let down defenses and share every fear and insecurity, as well as triumphs and tribulations, with the reader. In Dancing, with Mirrors, George Amabile does so boldly and beautifully, in eleven cantos that invite the reader to share his experience of the world.

‘George Amabile is an accomplished writer, having published fiction, nonfiction, and poetry in several countries and in hundreds of anthologies, magazines, and journals. He has published eight books and won a number of prizes for his work, including the CAA National Prize for literature in 1982 for The Presence of Fire.

‘With such credentials, it’s no surprise that the words in Dancing, with Mirrors flow and dance like waterfalls cascading over the reader’s perceptions. Amabile’s first lines are as compelling as those of any fine novel, hooking the reader for the lengthy meditations that follow. Though the subjects of the cantos are sometimes vastly different, the constant of Amabile’s poetic eye carries them seamlessly together. His is a magnifying glass-like analytical vision balanced with a wider, lyrical temperament, and it’s a heady combination.

‘The title poem tracks the relationship between the author and a younger woman, from their initial meeting through her pregnancy and the birth of their son. ‘‘What We Take with Us, Going Away’’ is a moving reflection on the death of Amabile’s brother as a child. On every page, Amabile offers metaphors and similes that leave the reader looking at common sights in a new light. He compares morning traffic to herds of wild beasts, and sets a scene where ‘‘the faint, nearly transparent moon has a shocked face / like the ghost of an infant ripped from its mother / ’s breast in a storm.’’

‘Amabile’s technique of carrying over into another line an ‘‘apostrophe-es’’ or other pieces of words or sentences introduces interesting double meanings, like a sentence that’s been split, diagram-style, with two possible endings, and many possible interpretations.

‘Amabile’s imagery is so rich that it’s easy to see through his eyes, even when the main action is subtle or internal: ‘‘Once, in Rome, I watched a fountain gather the shades / and values / of a Tintoretto dusk into gorgeous foam, a moment so / full it felt / as though my life had completed itself.’’

‘Amabile’s work in Dancing, with Mirrors is impressive by any measure, but even moreso when considered among other books of poetry. Many modern poets shy away from longer works, but Amabile combines the succinct power of poetry with the scope and scale of longer forms. The result is a highly recommended, highly enjoyable example of a master at work.’

‘A remarkable writer, Amabile provides us with a key to a larger understanding of the male ethos, something few male writers have attempted to do with such openness and honesty.’

‘Amabile is a well-established poet in firm possession of his own voice.’

‘Celebration and amazement are sustained by a harmonious balance of thought.’

‘Just as with Rembrandt’s self-portraits over the course of his painting career, so it is with Amabile: it is the continuity within change that is fascinating, the way a certain development could not actually have been predicted but, once there, feels natural, selfevident.’

‘Well crafted cantos [give Amabile’s] form a unique blend of almost epic poetry, ‘‘Dancing, with Mirrors’’ is a fine assortment and much recommended for poetry collections, particularly those with a focus on Canada.’

‘Amabile revisits his past experiences and memories and their meanings. "Sometimes history changes key and soars," he writes, and "sometimes it sits there like a damaged animal." History (memory even) as a damaged animal is difficult to associate with dancing, but maybe the success of the collection is in turning damage (loss, guilt, regret, absence) into insight and metaphor: Amabile calls this task "entertain[ing] possibility."’

‘Throughout this collection the reader is invited to share in the very personal ethos of one man, George Amabile, through his elegant and extraordinary verse.’

‘In choosing to share his life, George Amabile has crafted beautifully detailed settings in which characters and conflicts are brought to life through rich imagery. He has woven the moments of everyday life into a rich tapestry of observation and deep emotion, highlighting both the fallibility and purity of memory.’

‘These poems, surprising in their unaccustomed spaciousness, may open up new spaces in our minds and hearts.’

‘In Dancing, with Mirrors George Amabile not only pushes personal boundaries of memory and vision, and the conventions of form and imagination, he transcends them—adapting older poems and fragments alongside newer ones, distilling into the eleven cantos of his long poem a voice both authentic and recognizable to readers already familiar with his body of work. Indeed, Dancing, with Mirrors should take its place alongside bpNichol’s The Martyrology and Robert Kroetsch’s Completed Field Notes as an intriguing examples of the best of the Canadian long poem form.’

‘What muscular lyricism! Amabile is a fearless singer who finds the right note for every human emotion. With elegance and passion, he pushes against the silence of complacency. He’s both of the world and other-worldly, a vatic poet with a sharp intelligence, simply one of the country’s best.’

‘The poems composed for this new collection, many drawn from earlier poems now recomposed, ask two fundamental questions: Where are we and how can it be said? The questions curve around each other: Are we found when we are spoken, are we spoken when we are found? But the language of poetry, so apt for tracking loss and being tracked by it, is such a frail instruments, and poets walk nowhere if not across ‘‘the nothing that is,’’ as Wallace Stevens remarks, or as Amabile notes, ‘‘here / is the same as nowhere at all.’’ Everything teeters on the edge of exquisite enjambements ‘‘of the self / . . . its flowing away,’’ unabated.’

‘This book of poems is bound in a beautiful soft yellow parchment type paper and, in my opinion, the delivery of these eleven cantos is greatly complimented by your careful choice of binding and presentation.
Apart from the format I would also like to express my pleasure in reading this book of poems. The first part of the book explores the solitary development of our human consciousness and then moves (unexpectantly) in to the exploration of the life of a married man and the birth of his son later in his life. It drew me back 28 years to the birth of my own son and the universal rite of passage the birth of any child represents. I was struck by the candour of the poet in describing his experiences and by the remarkable way in which he finds the words and syntax to approach and define his joys and his fears.’

6.
A fuzzy half-moon hangs from the bruised night.
It looks as though it has become infected
with some as yet uncatalogued fungus, tenacious
as angelhair. It has lost its place
in the old stories -- Astarte, Nanna,
His-wang-mu, or the Mexican Trickster

Conejo -- and must be content
with its role as pock-marked veteran
of obscure plagues and wars,
the unearthly darkness packed like grease
around a bearing
that won’t hold up much longer.

7.
And all the while they were imagining
soft landings, the night sky,
the moon a pearl among diamonds,
the empty sleeves
of the sea.
Later, they abandoned each other
to ambivalent shade, breathing
shallow afternoons and closing the books
they had leafed through as a hedge against boredom.
It was enough to dream with half closed eyes,
to speak in fragments, in a vernacular
conditioned by boutiques and cafes.

Pods ripen and fall.
They gather their towels and cups,
their headbands, their unread mail,
and that is all they have time for
under cliffs with their fossil records
lying carelessly open,
a rough Braille in the decaying light.

8.
The big boat shudders and hums.
Light sparkles under a thin haze.
As the stern
veers
and steadies,
blue hills drift away. The gulls

adjust. The air-vent grills
quiver and blur, and the waves,
slate grey like the backs
of the gulls, change
textures: chipped
stone like a primitive ax-head,
hammered lead,
burred steel and a cross-hatch
of loosely woven linen...
The breeze dies. The sea is a mirror
filled with nothing but time. He was Writer in Residence at University of British Columbia for 1969-70, co-founder and editor of The Far Point, founder and editor of Northern Light, has edited a dozen titles for Nuage Editions, Signature Editions, Penguin and has published eight books. The Presence of Fire (McClelland & Stewart, 1982), won the CAA National Prize for literature; his long poem, Durée, placed third in the CBC Literary Competition for 1991; ‘Popular Crime’ won first prize in the Sidney Booktown International Poetry Contest in February, 2000; ‘Road to the Sky’ received an honorable mention National Magazine Award for 2000, ‘What We Take with Us, Going Away’ was shortlisted for the CBC Literary Prize in 2003 and he is the subject of a special issue of Prairie Fire, (Vol. 21, No. 1, May 2000). From October 2000 to April 2001 he was Writer in Residence at the Winnipeg Public library.

‘Dimuendo’ was awarded third prize in the Petra Kenney International Poetry Competition for 2005 and ‘A Raft of Lilies’ won second place in the MAC national poetry contest, ‘Friends’ (2007). He has performed his poems on the CBC, at numerous venues in Canada and the USA, and at the Olympics in Montreal.

His most recent publications are Dancing, With Mirrors (Porcupine’s Quill, 2011), Tasting the Dark: New and Selected Poems (The Muses Company, an imprint of Gordon J. Shillingford Publishing, 2001), and Rumours of Paradise / Rumours of War (McClelland and Stewart, 1995).