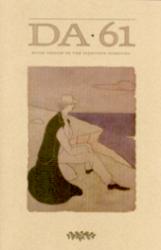 Book Design in the Eighteen-Nineties

DA 61 (Fall 2007) features a long essay by Margaret Lock of Locks' Press, Kingston, on the subject of Bliss Carman, Tim Meteyard and book design in the eighteen-nineties.

A new feature of occasional photographs includes a portrait of George Walker pretending to engrave a table in the Arts & Letters Club, Toronto; and an image of Stan Bevington presenting the seasonal candle to pressman Tony Glenesk at Coach House Printing.

Keepsake laid in was designed and printed letterpress, after Bliss Carman's poem `The Poor Traveller', by Nicholas Kennedy at Trip Print Press in Toronto.