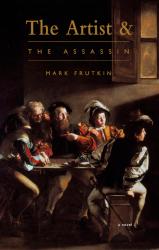 The play of light and shadow defines Mark Frutkin’s vibrant narrative based on the life of the seventeenth-century painter known as Caravaggio, whose revolutionary use of the chiaroscuro technique fuelled his dazzling success while his demons led him down the path of exile and, ultimately, assassination.

Rome, 1600. In the shadowed cellars of Cardinal Del Monte’s palazzo, a shaft of light illuminates the face of Luca Passarelli. Across the room, behind an enormous canvas, the brilliant, mercurial artist Michelangelo Merisi da Caravaggio paints with sure brushstrokes Luca’s likeness into a new masterpiece.

Caravaggio is both revered and reviled by his patrons as well as his fellow artists. His innovative paintings and his blazing temper have made him powerful friends, but also powerful enemies—enemies who are determined to quench the flame of his talent.

What Caravaggio does not know is that Luca is a professional assassin, a bitter and spiteful man who, in his dark past, has ‘breathed in death’ and has committed murder on multiple occasions. What the artist does not know is that when next they meet it will not be a canvas that brings them together, but rather revenge ... and death.

I am the cloud in the sky and you, artist, the cloud’s shadow scurrying over the earth. I am the cloud over your shoulder, sailing through the heavens, encountering no resistance. I carry lightly the thoughts, the belief, of a man who has never known doubt, while you, Michelangelo Merisi da Caravaggio, are the shadow of the cloud on the earth, rolling up and down hills as you try to escape. Where cloud and cloud’s shadow meet will be your end.

He has me posing as a saint, me, Luca Passarelli, with a thief for a father and my mother a wet-nurse. To be precise, he wants me playing Saint Matthew. Matthew, the one called by Christ from the streets to his spiritual life as an apostle. I sit at a table in the vaulted cellar of a palazzo belonging to one Cardinal Del Monte. I’m waiting with the artist’s other models, several older louts and two young men, boys really, snappily dressed in silks, wealthy punks out slumming with the likes of us. The artist chooses to pose me as the apostle and saint. If you can imagine that. Me a saint. I would qualify for a saint’s vow of poverty, certainly, but not by choice. Me with my one set of worn, flea-ridden clothing, a shirt, a tunic, and a pair of hose with holes in the knees. I cannot afford anything else. He has made me up to look older than I am. And I am no Jew, though Matthew was.

Altogether, seven of us pose in this cellar. Two of the models stand across the room, representing Jesus and Peter. Christ himself is pointing at me. The rest of us sit around the table counting the coins I gathered as if we are preparing for a night of gambling. I am the focus. Me, Matthew, known as Levi the Tax Collector in the ancient stories. The light shines on me, and on the young scamp to my left, one of the artist’s favourites, I hear. I wonder if he is bedding the boy? Could be, I wouldn’t be surprised, but I can’t say for sure.

Michelangelo Merisi, this artist from a little village called Caravaggio, stands across the room, gazing into his enormous canvas and working it, licking his brush before stabbing it again into his palette, and occasionally glancing out at us models posed around the table. His eyes are sharp, he bites his lip, he wears his thick, black hair longish in the front. Youthful style. A small window of this cellar is covered by a sheet of paper soaked in olive oil. I watched him early the first morning pour the oil over the sheet in a large pan. I could smell it. Expensive stuff. Enough oil for a family of six for a month.

The old guy sitting to my right complained on the second afternoon: ‘Why not make a quick drawing and let us out of here, finish the painting in your studio?’

Merisi didn’t even look up from his palette when he replied in a flat voice, ‘I don’t draw.’

He offered no more than that. Not, I cannot draw, but I don’t draw. No explanation. No apology. Nothing. As if we were invisible. As if we were made of clay and he the Creator. What kind of artist is he then? I’m no expert but it seems to me an artist should at least have the skill to draw.

We sit here day after day as he vanishes into that other room in his huge canvas--it must be more than ten feet across--coming out once in a while to look at us as if ... as if we are statues. Models. Actors. Our lives disappearing, dissolving into thin air, vanishing into his great work. We are worth less than drying pigment.

‘Stop moving,’ he warns, when one of the boys adjusts his seat.

As long as he keeps paying me, I will sit here, but I don’t have to like it.

[Continued in The Artist and the Assassin...]

Praise for The Artist and the Assassin

‘The Artist and the Assassin takes us on a frenetic journey into the turmoil and glory of late Renaissance Italy and an imagined life of Michelangelo Caravaggio. In this, his tenth novel, Mark Frutkin creates a man as troubling as he was troubled: scoundrel, murderer, man of overreaching genius and unbridled ambition, but also a fragile lover tormented by his ambiguous sexuality in a world both libertine and unforgiving of his passions. With The Artist and the Assassin Frutkin manages the neat trick of creating a novel that both blazes along like a swashbuckler adventure and paints an intimate--even meditative--portrait of genius.’

—Nicola Vulpe, author of Through the Waspmouth and The Extraordinary Event of Pia H.

‘The Artist and the Assassin reads like a thriller, one that thrills as much through its insights on Caravaggio’s painting as through the drama of his life. Mark Frutkin has given us a compelling portrait of Caravaggio and his world, one that beautifully captures the mix of darkness and light that so defined both his life and his work. ’

—Nino Ricci, author of Lives of the Saints, The Origin of Species and Sleep Mark Frutkin is the author of over a dozen books of fiction, non-fiction and poetry. His works include the Trillium Book Award–winning Fabrizio’s Return (Vintage, 2006), which was shortlisted for the Commonwealth Writers’ Prize for Best Book, and Atmospheres Apollinaire (The Porcupine’s Quill, 1988), which was shortlisted for the Governor General’s Award, the Trillium and the Ottawa Book Award. His latest book, Where Angels Come to Earth (Longbridge Books, 2020), presents a visual and poetic appreciation of Italian culture. He lives in Ottawa.