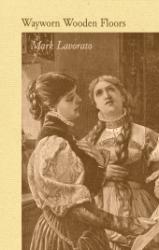 Mark Lavorato’s debut poetry collection, Wayworn Wooden Floors, is a striking piece of work, informed by an acute observer tuned to the everyday. These frank, thoughtful poems evoke both the tragedy and the comedy endemic to daily existence. Lavorato’s poems are penned in accessible, unpretentious verse, which is as clear as it is varied in form, tone, and vantage.

Multi-hyphenate Mark Lavorato draws on his skill as a novelist, composer, and photographer in this collection, rewarding readers with poignant, emotionally-genuine vignettes. The author composed much of the collection over the course of a thousand kilometre trek, the experience of which he channels through ‘on the trail’ verse. The exotic locales he has experienced colour some part of the freshness of the imagery throughout, while his interpretations of our history, and our struggles, infuse the diction with clarity and immediacy.

A Handful of Seeds

My father teared at movies.
His hobby, though,
was taking life.

He told me once, excitedly,
convincing me to try it,
having gently pulled me into a corner
where no one could hear,
that it wasn’t the hunt,
or the challenge, or the meat.
It was the killing.
To take a life from this world
just because you could.

He broke his leg one September,
so couldn’t scour the hills
for savage creatures.
Instead, confounded,
he whittled a branch at the edge of the forest,
his long cast pointing at the trees.

The autumn wind
fluttered through the clinging leaves
as they slowly
lost
grip.

And gradually, tenderly,
conversely,
he befriended the birds.

He sat for days
with a handful of seeds,
waiting.
And in time, though skittish with caution,
they came. First to the table beside him,
which was only a muffled drum roll away
from the safety of the branches,
and then, edging forward with tiny hops,
eyeing his cupped hand,
suddenly crouching, ready to fly
at the subtlest of movement.
Light feathered bodies
dainty with hollow bones,
hovering like spectators in a gallery,
wrists clasped behind backs,
scrutinizing this study of stillness,
of patience, of silence;
their shining black eyes
solemnly judging.

My father,
like the graveyard statue of a saint,
grinning at birds,
in sunlight as crisp as stone.

Later, his leg having healed,
he plucked his rifle from the corner again,
eager to tame the wild
that had come unleashed unto the world
in his absence.

Still, when I think of him,
it is this image that rises first.
A monument, honouring what he was,
but couldn’t be.

How to Make a Cake from Scratch

First you will need to take out your recipe,
as well as every recipe you’ve ever been given
and burn them. It is critical you disregard
anything anyone has ever told you about making
cake. A jerry can of gasoline and match facilitate.

The ingredients are complex. They will change
when you wish they would not. Avoid gathering
all your favourite tastes and textures. If you do so
the overall flavour will be bland and lack colour.
A zest of lemon in some form or another is best.

Your oven will need stoking, so you must leave
the comfort of your home, and go to the place that you
have been advised never to go. It is a place where the wood
is hard, the soil precarious, the air volatile. Go there.
Stand thin at its centre. Now close your eyes. And begin. The multi-talented Mark Lavorato was raised on the Canadian Prairies, but has spent most of his adult life living, working, and writing on his travels throughout Central and North America, the Caribbean, and Europe. He was inspired to begin writing while living in the Austrian Alps, reflecting on unsettling true stories he’d heard in the jungles of Guatemala. Aside from his writing, Mark is also a photographer and composer.