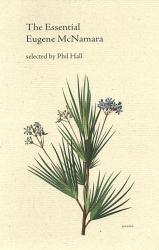 In The Essential Eugene McNamara, poetry pushes the barriers of language and grammar, daring to convey raw emotion with disarming empathy.

Eugene McNamara’s poetry ponders the textures and contradictions of his adopted city: Windsor, Ontario. Most comfortable in small, non-eloquent, delinquent, unpopular and wayward places, McNamara’s poems display abiding empathy with the inhabitants of these locales, conveying raw emotion through deceptively simple lines in which ‘voices cry wait / we didn’t want this / and the wind slams the words / around the corners of the empty / buildings down the empty / streets.’ The result is a selection offering poems of humility and grace that empathize rather than intellectualize.

The Essential Poets Series presents the works of Canada’s most celebrated poets in a package that is beautiful, accessible and affordable. The Essential Eugene McNamara is the twenty-fourth volume in this increasingly popular series.

What Have You Forgotten Eugene McNamara was a Canadian writer and professor. He was born in 1930 in Oak Parks, Illinois, and received his PhD from Northwestern University. He moved to Canada in 1965 to begin teaching American Literature and Creative Writing at the University of Windsor, where his influence lives on in the Eugene McNamara Creative Writing Scholarship. He published many books of poetry and short stories between 1965 and 2015, and became known for the direct and musical phrasing of his poetry, and for his character-driven short stories. McNamara died in 2016. Phil Hall has published twenty books of poetry and many chapbooks. He has won the Governor General’s Literary Award for Poetry in English and Ontario’s Trillium Book Award, and he has twice been nominated for the Griffin Poetry Prize. He has served as writer-in-residence at many Canadian institutions, including the University of New Brunswick, and the Pierre Berton House in the Yukon. His most recent work, The Ash Bell (2022), is published by Beautiful Outlaw Press. He lives in Perth, Ontario.