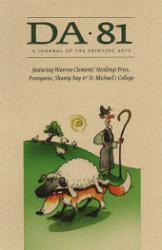 DA 81 focuses on the origins and development of a wide variety of specialty printers. In ‘The Art of Drawing Laughs: Nestlings Press Turns Five’, Warren Clements traces the roots of Nestlings Press, a plucky publisher specializing in humour books. In ‘The Pennywise Press: A Memoir’, Elizabeth Neill contributes a fond remembrance of a press that produced works of the Devereux family and friends for over five decades. Also included in this issue are John Shoesmith’s report on his visit to Shanty Bay Press, Larry Thompson’s feature on members of the Ottawa Press Gang, Manda Vrkljan and Noelle Gadon’s history of St. Michael’s College Press and Camilla Milton Gryski and Chester Gryski’s tribute to Denis C. Milton.

The front and back cover images are by Anthony Jenkins. ‘The Wolf in Sheep’s Clothing’ is from Aesop, ASAP, 2015, and ‘Humpty Dumpty’ is from If Famous Authors Wrote Nursery Rhymes, 2012. The keepsake is printed on the Vandercook by George A. Walker from an engraving by Denis Milton. 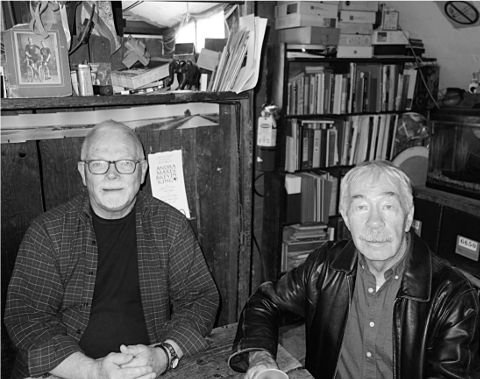